From Tabula to Backgammon

Backgammon-type games have been played for centuries in all parts of the world and certainly from the Roman era. We know for sure that the Romans played a game called Tabula and the rules of it have been established by historians to a good degree. 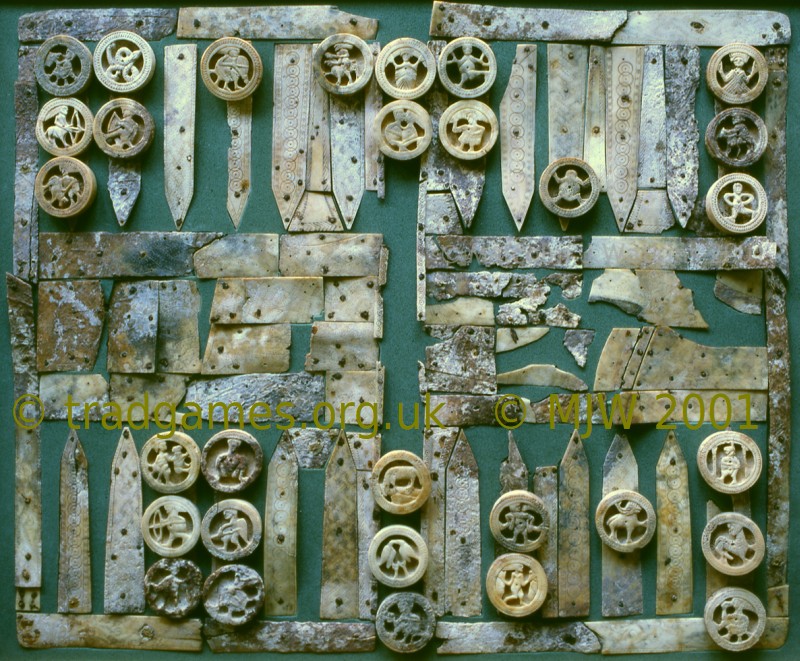 This remarkable item was found in 1983. It had been thrown away in a Norman rubbish pit on the site of the first castle at Gloucester. It must be one of the most valuable and fascinating pieces of rubbish ever found because not only is it the oldest Backgammon-type game board known in Europe, it is also the only complete Tabula set ever discovered...

The Intricately carved bone board onlay is possibly Viking or Anglo-Saxon. The playing-pieces are carved in bone and antler in the Romanesque style of the Normans.

The rules of Tabula bear more than a similarity to Backgammon - it was essentially the same. Here's a comparison of the two games:

The only differences were:

Ancestry of Backgammon prior to the Roman Era

There is a possible ancestor of Tabula that would take the lineage back to before the birth of Christ. That comes in the form of a game called 'Alea' of which a few historical mentions still survive. But, to current knowledge, the rules of Alea were never recorded and the word 'Alea' just translates as 'Die' (as in a singular dice) which doesn't give much away. Both Duodecim Scripta, Alea and others were also referred to as 'Tabula' meaning 'Tables', which really was a generic game for 'boardgame' and in early mediaeval times was usually used to mean the currently most popular boardgame at the time, Ducodecim Scriptorum/Alea/Backgammon, in the same way that the generic term 'football' normally means 'soccer' in England today.

This is a Duodecim Scripta board held at the British Museum. Many of the boards that have been found were in disguise, as is this one, because the authorities had banned gambling. Instead of squares to delineate the playing areas, letters were inscribed on the surface of the table in 6 sets of 6 letters . The letters usually formed words with an amusing or trite but certainly innocuous meaning so that the Roman police would not be able to accuse the owner of the table of running a gambling den...

The Romans left a great deal of evidence of a game they called Ludus Duodecim Scriptorum or Duodecim Scripta, the game of the twelve lines. This enigmatic board game was extremely popular judging from the number of boards found in Roman ruins and buildings. A clue to the rules comes from a text from Ovid (1 BC - 8 AD): "There is a sort of game confined by subtle method into as many lines as the slippery year has months: a small board has three counters on either side, whereon to join your pieces together is to conquer". From this we can deduce that the board has 12 lines, each player has 3 dice and combining your pieces gives a big advantage. Despite many speculations and conjectures from academics and games historians over the years, no more rules are known than this. It isn't really even possible to say for sure that it is a race game and not, say, some kind of war game. Many games historians have had a go at the rules including HJR Murray, Roland Austin, Robbie Bell and more recently Irving Finkel and Ulrich Staedler but a paper on the game by Ulrich summed up the situation well when he said "We cannot say anything concerning the rules of Duodecim Scripta...except that they seem to have been similar to Alea".

The earliest confirmed date for Duodecim Scripta is 2nd century BC from Publius Mucius Scaevola which mentions a formidable XII scripta ("game of 12 points") player in ancient sources (Quintilianus, Institutio oratoria, XI, chap.2, 38). The latest date is difficult to pin down but it may have evolved into Alea during the 3rd/4th century.

It has been popular for historians to fathom a link between Egyptian Senet and Duodecim Scripta and then from Duodecim Scripta to Tabula / Backgammon. For Senet, the argument is that both boards have a topological set of 3 x 12 points and were played with 3 x 6 sided dice but given that hardly anything else is known of the rules of Duodecim Scriptorum, it's a pretty speculative assertion. There is also a gap of several centuries between the latest record of Senet and the earliest evidence for Duodecim Scripta. Similarly, Duodecim Scripta has 2 tables of 3 sets of 6 playing areas separated by a gap while Tabula has 2 tables of 2 sets of 6 points separated by a gap (the bar) so the theory goes that the game just lost one of the rows to become Tabula. But that's quite a leap of faith with nothing else to go on so this author is unconvinced.

The rules of Senet are understood much better, although details probably changed over time, so it is possible to compare those with the rules for Tabula. Based on facts with reasonable certainty, a comparison of similarities with Backgammon can be made: 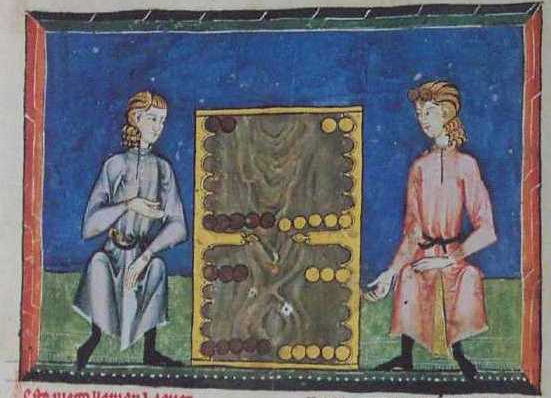 In Asia, the game of Nard appeared sometime prior to 800 AD, in South West Asia or in Persia depending upon which version of history one believes, and variants are played today throughout the continent. Chinese history gives that t'shu-p'u, the Chinese name for Nard was invented in Western India, arrived in China during the Wei dynasty (220 - 265 AD) and became popular from 479 to 1000AD. In Japan the game was called Sugoroko and was declared illegal during the reign of Empress Jito (690 - 697AD). Nard, in turn, seems to have been introduced into Europe via Italy or Spain following the Arab occupation of Sicily (902 AD).

The famous Book of Games by Alfonso X of Spain has a whole sub-book on the game of Tables, showing how boards and pieces were made and giving rules for around 14 different games that could be played on a Tables board.

Shown are 2 drawings from Alfonso X Book of Games. The first is Todas Tablas which is the most similar games in the book to modern Backgammon. The second is a game called Laquet showing that ladies enjoyed Tables just as much as the gentlemen. 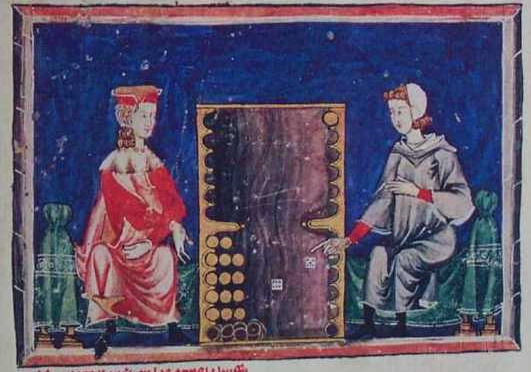 The first mention of the game in English print was in The Codex Exoniensis published in 1025: "These two shall sit at Tables...". Tables was probably brought to England by men returning from the Crusades. Nard or Tables was played throughout Europe during the middle ages and became very popular in English Taverns, although Chess overtook it as the more popular game in the fifteenth century. By the end of the sixteenth century, Tables had, for some reason, become a generic term for any game played on a flat surface or table. Like many games played for money, it became unpopular with the authorities in England and, until the reign of Elizabeth I, laws prohibiting the playing of Tables in licensed establishments were in force.

In the early seventeenth century, however, following some modifications to the rules, the game underwent a revival and it swept across Europe again under a variety of different names which have mostly stayed the same until today: 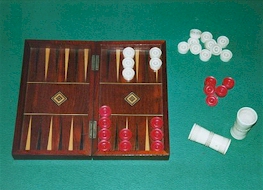 Image is of a board from the author's parents collection.

In England, the term 'Table' referred to what, today, we would call one half of a Backgammon board and 'Tables' refers either to the board consisting of 2 tables or the family of games that were played with such a board. Tables games documented by Francis Willughby in the 1660s included: 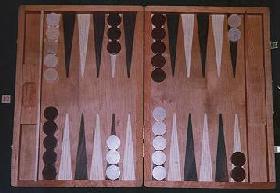 Image is of a board from the author's collection

It is a subject of debate as to whether the term Backgammon is derived from the Welsh 'back' (little) and 'gammon' (battle) or from the Saxon 'bac' (back) 'gamen' (game).

Backgammon has become popular among high stakes poker professionals and is played for astronomical stakes at various gambling sites on the Internet.