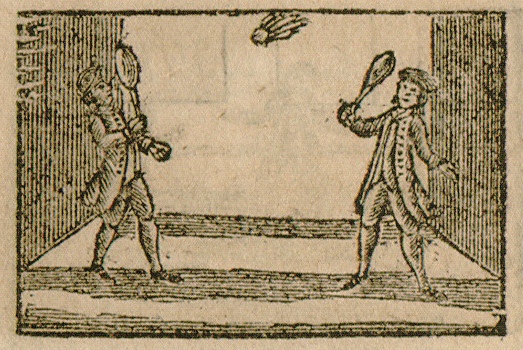 Battledore and shuttlecock is a game which probably developed in Ancient Greece around 2000 years ago. From there it seems likely that it spread East to China, Japan, India and Siam. Peasants played it in medieval England and by the late 16th century, it had become a popular children's game. In the 17th century, Battledore or Jeu de Volant was an upper class pastime in many European countries. Battledore and Shuttlecock was simply two people hitting a shuttlecock backwards and forwards with a simple bat as many times as they could without allowing it to hit the ground. In 1830, the record for the number of hits was made by the Somerset family - 2117 hits.

A book dated 1744 featured this picture together with a little rhyme: The shuttle-cock struck does backward rebound; but if it be missed, it falls to the ground. Moral: Thus chequered in Life as fortune does flow; Her smiles lift us high, her frowns sink us low".

The name 'badminton' comes from Badminton House, the Duke of Beaufort's residence in Gloucestershire (now Avon) where a new version of battledore had emerged by the end of the 1850's. (Isaac Spratt, a London toy dealer published a booklet, "Badminton Battledore - a new game," in 1860, but unfortunately no copy has survived.). When Battledore became Badminton isn't known exactly but the first rules of the game were written in Poona, India by the British in 1873 and these were not dissimilar to the modern game. The game (which was sometimes known as 'hit and scream') was very popular there as well as in England during the 1870's and 1880's but more as a social outdoor pastime rather than a sport.

In 1883 in a slim volume entitled, "Lawn Tennis, Croquet, Racquets, etc." was published which included ten pages on Badminton which the author described as "Lawn tennis played with shuttlecocks instead of balls." People returning from India to England began to give the game more credibility and, as people started to take it more seriously, in 1893, the first meeting of various clubs was convened at Southsea in Hampshire in 1893. Soon after the Badminton Association was consequently founded by and 14 foremost clubs in England agreed on a uniform set of rules. In March 1898, the first Open Tournament was held at Guildford the first 'All England' Championships were held the following year.

This picture of a pair of battledores, c.1880 is by kind permission of Bob Rankin of Newcastle under Lyme, Staffordshire. The sticker says 'Warranted Best Vellum'. The wooden handles are wrapped in a thin leather covering with a chain pattern embossed into them. There are traces of gold leaf that can be seen and each battledore measures 17½" and 5½" across.

The origin of the shuttlecock is unclear although one theory has it that corks were used to store feathers for some reason (writing feathers perhaps) in the past and the resulting object became a popular thing for first throwing and then batting.

Denmark, the USA and Canada became ardent followers of the game during the 1930s and in 1934, The International Badminton Federation was created, members initially being including England, Wales, Ireland, Scotland, Denmark, Holland, Canada, New Zealand and France, with India joining as an affiliate in 1936. The game was also becoming popular in Malaysia, Indonesia and Australia. The first fully professional open badminton tournament was played at Albert Hall in London in 1979. Badminton was admitted as a full medal sport at the games of the XXVth Olympiad in Barcelona in 1992.