The origin of the Billiards family of games is partially shrouded in mystery but it is many centuries old and almost certainly derived from an out-door game of played during the 14th century in Northern Europe.

During the middle-ages and even back to ancient Egypt, many sports were played with balls, clubs, maces or bats and skittles. There are ancient pictures depicting games that are clearly the forerunner of modern Skittles (and 10 pin bowling), Bowls, Quoits and Tennis, for instance. It is popular in textbooks to paste in pictures of these various ancient games and to claim some kind of relationship with Billiards which, in this author's opinion, is highly dubious.]

In 'Sports and Pastimes of England' by Joseph Strutt, can be seen this illustration of Ground Billiards. Some textbooks claim that this is evidence that of the game being played in the 1200s as it is copied from a 13th century manuscript but this may be a little early. The 14th century (1300s) seems to be a better estimate, and according the Canadian National Billiards website, the manuscript's date has been estimated to be from 1344.

However, records do show one game that is related to Billiards. Sometimes known as 'Ground Billiards', the game was played on a small outdoor court with a hoop at one end and an upright stick at the other. This Croquet-esque pastime required people to strike balls around the court with maces. No certain rules are known for the game but it seems entirely likely that they were similar to the rules outlined for Port & King Billiards in the next section.

The picture to the right shows a section of a woodcut engraving from the 1600s. This engraving is a copy of a tapestry that was commissioned at some time in the 1500s for the St. Lo Monastery in France. The tapestry shows the same scene being played in a wood in springtime.

Clive Everton (in his History of Billiards) states that Ground Billiards crystalized into existence in the 1340s and carried on into the 1600s. It was played throughout much of Europe - in Italy it was known as 'biglia', in France 'bilhard', in Spain 'virlota' and some texts say that in England it was known as 'ball-yard' although the author has not found a source for this. The game appears to be critical to game history since many historians believe that it also led eventually the game of Croquet. There is no evidence of an ancestor of Billiards prior to this time, unless you do lower your criteria to count all the other games played with bats, balls and skittles.

At some point in the 1400s, people began to play a version of Ground Billiards indoors on a table in addition to the existing ground sport. It's likely that the green cloth was supposed to represent the lawn from which the game had been stolen. [Adaptation of outdoor sports for the indoors has happened to other games in Northern Europe at one time or another including Quoits, Old English skittles and Western Skittles and Bowls - presumably players did not want to stop playing when the long nights and inclement weather of winter set in]. 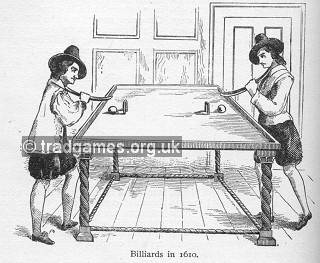 Shown is a picture depicting a game of Billiards dated 1610. This version mysteriously seems to feature two hoops (Ports) rather than a Port and King.

The earliest evidence found for the existence of Billiards played on a table was in 1470 in an inventory of items purchased by King Louis XI of France. Listed were "billiard balls and billiard table for pleasure and amusement.". Earliest mentions in England were in 1588 when Billiard tables were in the possession of The Duke of Norfolk and the Earl of Leicester as well as Mary, Queen of Scots, who had a billiard table in her prison cell while she awaited execution.

The new table Billiards appears to have been an extremely popular game across France by 1630 and in England it was described in various publications during the 1600s and 1700s including the first description of the rules by Charles Cotton in 'The Compleat Gamester' published 1674. No doubt various rules were in use and certainly there was no consistency in dimensions and type of equipment, the most popular version was a two player game played on a table with six pockets. The pockets, called 'hazards', were simply there as obstacles to be avoided - like bunkers in golf. The table featured a croquet-like hoop at one end called the 'Port' and an upright skittle at the other called the 'King'. Each player was allocated a single ball which was pushed rather than struck with a mace (a stick with a special wooden end). The idea was to be the first through the Port in the correct direction (if your ball went in the 'wrong' direction, you were deemed a 'fornicator') and then back to touch the King without knocking either Port or King over. A point was scored for each time you did this and the winner was the first to a number of points - typically 5.

If this sounds simple, remember that the tables were rarely flat, the balls not completely spherical and maces are hardly implements of great accuracy. Additionally, in common with Croquet, the game was as much about knocking the opponent's ball into penalties as about furthering one's own cause. Pushing the opponent's ball into a hazard, the wrong way through the Port or causing it to knock over the King was as beneficial as running the Port yourself...

The concept of a 'break', something we take completely for granted these days, was completely unknown at this time. Players simply took turns to strike their ball. This fundamental difference made all versions of billiards prior to the invention of the break very different to play compared with those that we are used to today.

In common with many other pub games, Billiards was was banned from Taverns in England in 1757 due to its seedy reputation.

The development of the various forms of billiards and it's changing rules over time owes much to improvements in the equipment used. This applies to the balls, the maces or cues, the surface of the table and the side cushions in particular. Without radical improvements to all pieces of equipment used in the game, none of the modern variations of Billiards could exist. There were hundreds of new innovations and changes over the next 2 or 3 centuries but here are a few of the more significant inventions:

The 4 sub-families of Billiards

The story of billiards in all it's varieties and with a complete lack of any accepted standards was far from clear up to this point but around now it started to separate into several paths which the author invites you to trace via 4 separate pages.

Around 1770, Port and King Billiards, which had seen astonishing success having survived for probably more than 3 centuries (Pool and Snooker enthusiasts take note - your games haven't been popular for a century yet), began to be superceded in England by two new variations - 'the Winning Game' and 'the Losing Game' in which the Port and King did not feature. This was the first step in the convoluted process that led to English Billiards and Snooker. These games that were naturally exported to most of the British colonies (approximately a quarter of the world at the time) and indeed Snooker, the King of all Billiard games was invented in India.

Meanwhile, the French had also been creative - the game of Carambole or Carambolage had been invented by 1810 and not long afterwards the French started making tables without any pockets at all which was the start of the the second main branch of the Billiards family tree. The new concept of the Cannon, Carom or Carombolage was adapted by the English for their Billiards game and variations of Carambole would become popular across much of Europe, the USA and in some parts of Asia.

In the 1800s, Americans who up to now had been simply importing and copying what was happening in Europe had started down their own path with new games called One Pocket, Four Ball Billiards and Fifteen Ball Pool which was the first of many games in the American Pool family.

Finally, the Italians were playing Pin Billiards, a branch of the game that has found it's way through central and Northern Europe as well as to South America.

The word 'billiard' has a disputed etymology - but it is likely a French derivative coming either from 'billart' (mace) or 'bille' (ball).

The word 'Billiards' has come to mean different things to different people. Presumably, the original word Billiard referred to the game of Port and King billiards played with the hoop and skittle. Later and still today in England it has come to mean the descendent of this game played with two white and one red ball - we'll call this 'English Billiards'. But as other games began to be played upon the table, Billiards could sometimes simply mean any game played on a Billiards table - i.e. the generic 'Billiards family of games'. For the purposes of this website, the term 'Billiards' will always mean the family of Billiards games.

In Europe and some other parts, Billiards or Billard simply refers to Carambole, the primary game that is played there. Again, the term Carambole will be used for this family of games so as to be clear.