Billiards and Snooker from England and the Commonwealth

Around 1770, Port and King Billiards, which had seen astonishing success having survived for probably more than 3 centuries, seemed to be superceded in England by two new variations - 'the Winning Game' and 'the Losing Game' in which the Port and King did not feature. The 5th edition of Cotton's 'Compleat Gamester' published in 1734 states that the Port & King were no longer in use.

An image of Port and King Billiards as it appeared in Charles Cotton's book of 1709.

The objective in the Winning Game was to pot the opponents ball into a Hazard for 2 points, players being penalised 2 points if the cue ball went into a pocket. The aim of the Losing Game was to go "in off" the opposing ball for 2 points, players being penalised 2 points for 'hazarding' the other ball. In both games, completely missing the other ball meant a penalty of 1 point and knocking the cue ball straight into a pocket without touching the other ball was penalised by 3 points. Thereafter the term 'winning hazard' was used to mean a pot and 'losing hazard' meant going 'in-off' - these terms are still used in the official Billiards and Snooker rules today.

Also popular before long was 'The Winning & Losing Game', in which of course both losing and winning hazards scored. This author speculates that perhaps, the improvements to the equipment over the centuries had changed the nature of the game so that it became easier to win at Billiards by potting the opponents ball than by passing the Port & touching the King. When this happened, the two implements became superfluous; mere obstacles to be avoided. So it would have been understandable for players to dispense with them altogether.

The Winning and Losing Carambole game

Around the same time, the French had invented the game of Carambole wherein points were scored for hitting one ball followed by another at a single stroke. There are records that stained balls were being sold in London as early as 1771 - whatever, the red ball and carambole, which the English shortened first to 'carrom' and then to 'cannon', was imported into England around this time. "The Annals of Gaming" published in1775 had the following text -

It appears that the English had amalgamated the potting aspect from their 'Winning Game' with the carom to come up with the version described. It also seems that the concept of the 'break' had still not arrived - the comment about seven points in one stroke indicates this plus sixteen points is surely too few for a game allowing a run of several strokes in a row.

Textbooks give us a confusing and contradictory series of descriptions as to the games being played at this time - probably because what was around was indeed confusing. This game was called 'The Winning Carambole game' in some books and there was also 'the Losing Carambole game' and naturally enough the 'Winning & Losing Carambole game'. In this, 2 points were scored for potting the opponent's white, or going in-off it; 3 points were added for either potting or going in-off the red; 2 points were scored for a Cannon. A player was penalised 1 point for a complete miss and 3 points for missing and going straight into a pocket.

In conclusion, it seems that all combinations of the three concepts were played and that trend continued with the advent of the fourth important concept, the 'break'.

All that was needed to transform the Winning and Losing Carambole game into English Billiards was of course the concept of the 'break' or 'run'. The earliest mention of this is in 'English Billiards' published in 1839 by Edwin Kentfield, the first Billiards champion and greatest player of his time. In it, he mentions 'The Winning and Following game', the latter term meaning that a player who scores may follow immediately with another shot. 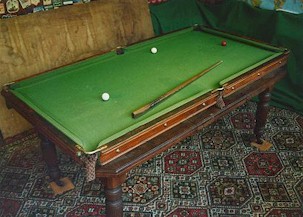 Once the concept of the break had emerged, it was presumably soon applied to the 'Winning & Losing Carambole game', which was the most interesting of the variations around, and this became English Billiards, a game still popular at the turn of the millenium. For the next 100 years or so most people referred to this game simply as 'Billiards' - Commonwealth countries still do - like Port & King Billiards, this was the only serious game around at the time. The first American mention of the 'run' is later in 1857, while the '1845 Hoyle' mentions the 'French Following Game' so called to distinguish it from the French style of game in which only one strike was allowed per turn. So it seems likely that the change occurred in England and was soon taken up by the French, Americans and others for their games. Although often overlooked in texts on Billiard history, this simple change must rank with the move from ground to table and the removal of the Port & king - a truly revolutionary moment.

From the first half of the early eighteenth century, the game underwent many modifications and varieties of the rules abounded. This situation abated in England during 1885 when the Billiards Association was established after which the game's popularity grew to such a level that in '1923 Hoyle' describes it as one of the 'great national sports'. In 1908 the opposing Billiards Control Board was inaugurated which resulted in much confusion, Amateurs tended to the Association rules while Professionals seceded en-masse to the BCC. In 1919, this unhappy situation was halted when the two merged to form the Billiards Association and Control Club.

Known at the time simply as "Pool", this game arose during the 1800s as an alternative game for a Billiards table geared more towards those of a gambling bent. Life Pool is an eliminative game for a number of players each of which uses a different coloured ball as their own cue ball in order to pot the cue balls of the other players. Each time a player's ball is potted, that player loses a life. If a player manages to pot all of his opponents balls in a single break, his turn ends and he respots his own ball on what is now known as the 'black spot' for the next player to aim at.

It was a game for up to 14 players with all the snooker colours except black being used plus red and white. Two balls of each colour could be used - one with and one without a spot, to differentiate.

The name 'pool' comes about because each player lays a stake which is pooled, the winning player being the recipient of the pool.

This enhancement to the game of Life Pool was another step on the road to Snooker. In it, once a player had potted his allocated ball, he could then attempt to pot the black, a successful shot resulting in additional winnings from the other players.

Another English game which used to be played on a Billiard table, 15 red balls were lined up in a triangle and players took turns to try to pot them with the white ball. This game is a key one in Billiards history since the triangle formation was copied in the creation of important later games - Snooker and the first American Pool game - Fifteen Ball Pool

Snooker is actually a combination of Black Pool and Pyramids, the 15 red Pyramids balls are racked up in a triangle together with the balls from Life Pool, which are placed separately and the black is placed below the reds at the foot of the table. The concept of attempting to pot a colour following successfully potting a nominated ball is clearly inherited from Black Pool, too.

The game was invented over the course of 1875 by Colonel Sir Neville Chamberlain (not to be confused with the British Prime Minister) who was stationed at Jubbulpore, India. It was his inspiration to combine the balls from Black Pool with the reds from Pyramid to produce the first Snooker game. Originally, it featured yellow, green, pink and black only. Blue and brown were a later addition. 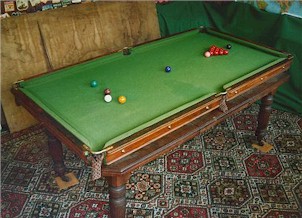 Shown is the same Billiards table as in the earlier picture with modern snooker balls arranged for the start of a game.

The game spread within the British regiments posted to India, led primarily by Chamberlain who moved through various postings. The game was brought back from India to England by John Roberts who met Chamberlain in Calcutta with the specific intention of finding out more about the game of which rumours had been heard in English snooker halls. From there, a gradual increase in popularity eventually saw the codification of the sport when the formerly fiercely rivalrous "Billiards Association" and the "Billiards Control Club" coalesced in 1919.

In the UK, Snooker enjoyed a huge increase in popularity from the late 1970s onwards and during the 1980s & 90s was a major television sport. In general, Snooker is most popular in the countries of England, Wales, Scotland and Ireland together with Commonwealth countries such as South Africa, Australia and Canada. However, other countries also have burgeoning experts such as Thailand and America.

United States Snooker Association
Billiard Congress of America (although this is a site ostensibly about Pool (American Pocket Billiards, it includes 'A History of the Noble Game of Billiards' by Mike Shamos)