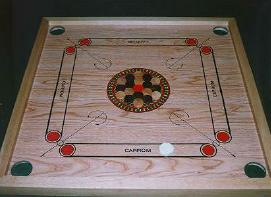 Carrom, Carums, Karom or Karum is most popular on the Indian subcontinent although versions of it are played right across Asia encompassing the Middle East including Saudi Arabia, Kuwait and Yemen, Central Asia from Turkmenistan to Afghanistan and as far East as China, Malaysia and Indonesia.

The author's board shown is a modern one made in England. 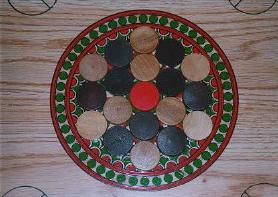 Strangely, in Scandinavia, the USA and China, versions utilising small cues in the same way as for Billiards exist. According to Billy Stevens of the Carrom Company, the US rules for the cue game are the same as the ordinary game but the striker is hit with the cue instead of the finger. 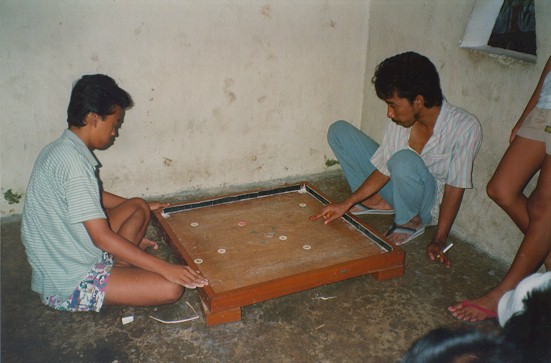 Two young men play Carrom on a home made board with bottle tops for counters, Java, Indonesia.

Variations abound - the Fijians, for instance, call the game Vindi Vindi and propel the striker by placing their finger on the tip of an arrow which then rebounds off their finger.

Its origin is unknown although boards bearing similarities have been found in ancient Egyptian tombs, and Greek writings mention games which appear to be conform to the basic design. 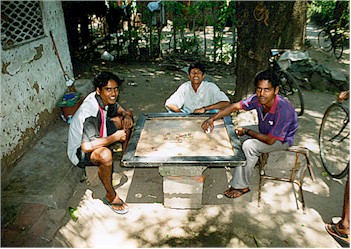 The board is like a small square snooker table made of wood with pockets in each corner. On the board are nine black disks, nine white disks, one red Queen disk and one larger white Striker. Players flick the Striker from their side of the board in an effort to get their own colour disks into the pockets.

The Queen is the wild card. The game cannot be won until the Queen has been potted or 'covered' and the player who wins the round scores extra points if they also covered the Queen.

The two player game has a quite different feel and strategy because the striker can only be propelled forwards so any disks behind the striker line can only be hit by first bouncing off the opponent's side of the board. This means that safety and percentage shots can be played wherein one attempts to make the opponent's disks end up behind their line. In the four-player version of the game, one or other of the partners can always hit any disk directly... 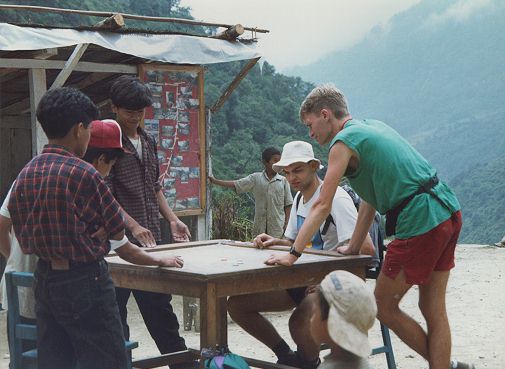 The author and his friend, Mark Peet, are challenged to a game in the mountains of the Anapurna range, Nepal. We lost.

On 4th March 1956, the All-India Carrom Federation came into being to control the rules, dimensions of game components etc. This was later superceded by The International Carrom Federation (the ICF) which was created in 1988 at Chennai in India. In the same year, official rules were published, although they have regularly changed, sometimes quite significantly, over the years.

International Carrom Federation including the official laws of the game