The History of Cribbage

The invention of Cribbage, Crib for short, was attributed to the poet Sir John Suckling (1609 - 1642) by his biographer, John Aubrey.

The board shown to the left is a very old board indeed inscribed (H.W. Strawberry Hill 1765), courtesy Gerry Aldous of British Colombia.

Suckling was something of a scoundrel by all accounts, "the greatest gallant of his time, the greatest gamester both for bowling and cards, so that no shopkeeper would trust him for sixpence". He was an expert at cards, dice and bowls as well as being a womaniser and notorious wit on top of his poetry day-job! His most notorious feat began when he distributed large numbers of packs of marked cards to the aristocratic populace around England. He then followed up this preparation by going around the country playing the local gentry at Cribbage for money, managing to earn himself around £20,000 (about £4 million in today's money). His lifestyle eventually led to his downfall, however, when in 1642 he allegedly became involved in a plot to free the Earl of Stafford from the Tower of London. In an effort to escape the consequences of this, he fled to Paris and there committed suicide by poisoning himself at the age of 32. 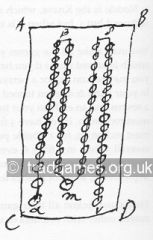 Cribbage is actually no more than an extension of the well-established Tudor game of Noddy or Noddie. Noddy means 'fool' or 'dimwit' and, in 'The Compleat Gamester' published by Charles Cotton in 1674, the upturned Jack in 'Cribbidge' is referred to as 'Knave Noddy'. Cribbage is exactly like Noddy in all respects including use of the special scoreboard except that Noddy does not use a Crib.

Shown to the left is a quick sketch of a noddy board made by Francis Willoughby during the 1660s.

In the 17th century, Cribbage or Cribbidge, as they spelled it, referred to what we would now call "5 card cribbage" so 5 cards were dealt to each player and 2 of those discarded into the crib. By contrast, in the game of Noddy, only 3 cards were dealt to each player and combined with the upturned card to make "the Show". Cribbage afficionados know that much of the subtle strategy that marks the cribbage expert from the amateur centres around the decision as to what to discard into the crib each hand. Whoever came up with the idea of the Crib and therefore invented Cribbage was certainly a genius - because that new concept gave us what many people regard as the best card game in existence. 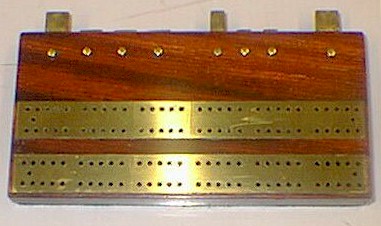 There's no hard evidence to show that Suckling was the inventor of the inventor of Cribbage. The traditional story says that Suckling invented the game after 1632 (age 23) whereas the Oxford English Dictionary has it's first reference to the word "Cribbage" at 1630, the year that he was knighted, which sheds some considerable doubt upon that version of events, in this author's view. It does seem likely, though, that Sir John did, at least, codify the rules to Cribbage and, however game came about, he was the man responsible for publicising and spreading the new game throughout the land. Cribbage itself is a most elegant and enjoyable pastime with just the right combination of skill and luck. It's not difficult to pick up but can take some time to play well and so it is not surprising that the new game was taken up so enthusiastically nor that it has lasted so well.

To the right is shown a cribbage board that is also a whist marker probably from the late 19th century. Below is a good hand at six card cribbage - note that the Jack must be the same suit as the turned up card giving a point for "his nob". A player holding this hand would say something like "seven fifteens are 14, three pairs is 20 and one for his nob is 21. If the turned up card had been a 5 diamonds, the score would be 29, the maximum possible. 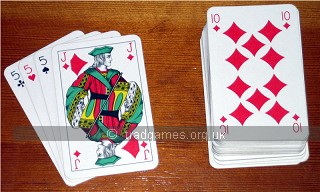 Formerly, the only card game that can legally be played for money in English pubs, Cribbage requires the use of a scoring board which appears to have been in existence long before the invention of Cribbage itself. Some historians have speculated that the board may be much older and descended from Mancala or ancient Egyptian game boards such as Hounds and Jackals but there seems to be little evidence for that theory.  The board is by no means used only for Cribbage, either - many other pub games such as Table Skittles and Indoor Quoits commonly use the same board for scoring.   The game spread from England and is now played all over the world - see here for some historical American Cribbage boards.

A standard Cribbage board is a lesson in functional simplicity. Each player moves a pair of pegs up the outside and down the inside of their side of the board. The front peg shows the current score while the rear peg shows the previous score - a device that efficiently prevents mistakes and allows opponents to curtail any surreptious cheating. The holes are clearly divided into sets of five, a fact that allows large scores to be tallied immediately without counting and means that a quick glance is all that is needed to determine who is winning and by how much. A complete trip up and down the board is 60 holes but each end has a finishing hole into which the winning peg is placed. Thus, games scored using a Cribbage board are usually first to 61, 121 or 181.

Middle two pictures are from the author's collection - antique Cribbage board, 19th Century and modern board with pack of cards.

These days Cribbage is one of the most popular card games around and is still played all over Britain in pubs. The British National Domino and Cribbage Championships has been organised by Keith Masters (no relation of the author) annually in Stoke on Trent since 1985. In 2003, the Cribbage championships will be at Bridlington according to the following table:

Free printable rules of Cribbage are published on the Cribbage Rules page in the rules section of the Masters Traditional Games website.

You can buy inexpensive cribbage boards from most toy and games shops. Masters Traditional Games has some quality cribbage boards and better quality boards can sometimes be found at craft fairs or antique shops.

Both very kindly sent to the author by Bette Bemis of The Cribbage Board Collectors Society (no website).