Mallet and ball games are thought to have been first played in England and Europe during the middle ages. Games would normally involve only one ball which would be struck through very wide hoops. A Croquet-like game is believed to have been played by thirteenth century French peasants who used crudely fashioned mallets to whack wooden balls through hoops made of willow branches. A variety of equipment has been found indicating that, as was typical, there were no standards and a variety of rules and types of game were in existence for several centuries. One type of game which this author calls Ground Billiards' featured a hoop and a stick, a point being scored for each time your ball was first through the hoop and onto hit the stick. At some point in the 15th century someone chose to invent an indoor variation of this played on a table which led to Billiards and that whole family of games

Another old game in this family is Closh (also Cloish, Claish and later Clash). It is an obsolete and mysterious game but quite possibly just as critical in the understanding of game history since English references to it span the period from 1477 - 1861. It's definition is not clear. Later documents state confidently that it is almost identical to ninepins but earlier quotes mention Kayles (the old English word for Skittles) and Closh separately leading to the conclusion that they were distinct while Dutch manuscripts about 'Klos' from the 1500 & 1600s imply that balls were directed through hoops and/or rings by a large spade-like implement called a Klos-beytel. Could Closh be in fact one and the same as Ground Billiards? It would seem a reasonable confusion if the game equipment included both skittles and hoops/rings? Mystery notwithstanding, from these medieval games sprang multiple modern distinct ancestors, all of which are still played today with varying degrees of popularity including Golf, Croquet, Kolf, Crosse and Lawn Billiards.

For more information on the history of Golf, see lots of websites and books all over the place. See my Pall Mall page for an original piece on that game and it's modern ancestor Kolf. For Lawn Billiards and Croquet, read on. 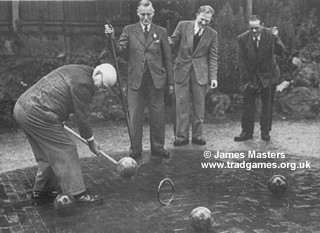 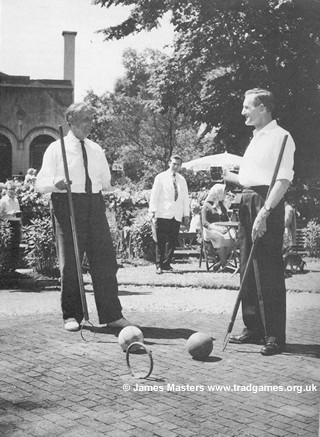 There is a third modern game in the Mallet and Ball family. Peterson's Magazine, June, 1864 described the game of Troco, or Lawn Billiards. To quote "It is played by any number of ladies or gentlemen, and the object is to pass a wooden ball through an iron ring fixed on a movable pivot in the centre of a circle, round which the players take their places. The ball is lifted from the ground by means of a cue furnished with an iron ring at one end, and propelled or thrown forward by a simple movement of the arm. As it is the object of the player to pass his own ball through the ring, it is equally the object of his opponent to prevent him. This he accomplishes by means of a roquet, or canon. The game is generally played fifty-up; one point being counted for a simple roquet, two for making or passing through the ring, and three for roqueting and making the ring at the same stroke".

To the right and left are two pictures of Ground Billiards being played at the Freemason's arms - with great thanks to Arthur Taylor.

Lawn Billiards was played in England until the latter half of the 1900s. The last remaining court at the Freemasons Arms in Hampstead was covered over in concrete some time between 1960 and 1990. This great old pub retains one of the two last Old English Skittles Alleys [let's hope that this doesn't go the same way...] - but the club that plays there is still called the 'Hampstead Lawn Billiards and Skittles Club'. It is said that the court is still intact underneath the concrete so maybe one day it will see the light of day, again. 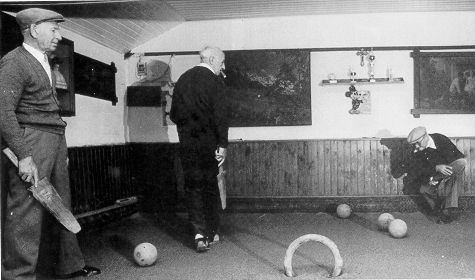 Versions of Lawn Billiards were played all over Europe - in Belgium it is known as Beugelen. This is a picture of Beugelen being played by some old-timers, courtesy of Arthur Taylor. One can immediately see two differences between Beugelen and the English game - the hoop is fixed and the playing sticks are like paddles instead of rings on the end of sticks.

It would seem possible that there is some relationship between Lawn Billiards and Pall Mall but presently, this remains a mystery. The players at the Freemasons referred to their game sometimes as 'Pell Mell' or just 'Mell' and one can imagine that the final few strokes of Pall Mall wherein players attempted to scoop the ball through the hoop using spoon-like implements might have been very similar to Lawn Billiards.

Contrary to most text books, the modern game of Croquet probably is not an evolution of Paille Maille. It might be the descendant of the early Ground Billiards and/or Closh games but such an assertion would be conjecture because the ancestry of the game prior to its arrival in Ireland from Europe or Asia is completely unclear. It seems to be undisputed, however, that a game called Crookey was played in Ireland from the 1830's and that, in 1852, it was brought to England where it quickly became popular. It was particularly popular with women because it was the first outdoor sport which could be played by both sexes on an equal footing. Widespread popularity began when Croquet equipment became readily available due to London sporting goods manufacturer, John Jaques & Sons, who began selling complete croquet sets.

Spearheaded by Australia and New Zealand, Croquet spread quickly to the British colonies. By 1870, the game had reached virtually all of the British colonies and its popularity grew, following the earlier trend of being especially popular with women. Around this time, the game was denounced from the pulpits of the day, and play was actually banned at some sporting clubs. Croquet was played at the 1900 Olympics but around this time, the up-and-coming sport of Tennis started to eclipse Croquet and this other game's ascension marked the end of Croquet's heyday. The last 20 years has seen something of a resurgence particularly amongst the young.

Today, Croquet is played competitively in over twenty countries, the major ones in the 1990s being Australia, New Zealand, the United Kingdom and the USA.

In Australia, for example, there are nearly 7,000 registered players which is a similar number to Olympic sports such as boxing and rowing.

In the USA, 3 forms of the game are played. International Association croquet vies with "American rules" which uses the same lawn and equipment but has a few rule variations. Many of the best competitors play both versions. In addition there are some garden sets for playing Backyard Croquet which is played with 9 hoops and 2 pegs.

Many other countries play croquet or their versions of it. France hosted the 1995 World Croquet Federation Championships, Japan plays Croquet along with a similar game called Gateball, Egypt plays a simpler form of Association croquet. In Russia, Tolstoy had a Croquet lawn in his Moscow garden and astronauts are reported to have played for relaxation upon their return from space. Finally, China possesses many Croquet players from different age groups - a picture in the Illustrated London news of 1938 showed Revolutionary guards playing the game!

The World Croquet Federation set up in 1986 with 12 founder members and a further 8 members having joined since.

The Croquet Association of the UK

The Kolf Web Museum / Ancient Golf - a fascinating website about the ancient bat and ball games that led to the modern forms of Golf, Croquet etc.