Tile games of some form have been found from around 1120 AD in China. Chinese dominoes are longer than Western ones and are divided into two types and were originally carved from bone or ivory with the indented pips made of ebony. Each Chinese tile represents one of the twenty-one different permutations of throwing two cubic dice although there are a total of thirty-two tiles since certain dominoes are duplicated. A set of Chinese tiles is divided into two categories - Military and Civilian. The Civilian tiles are the set of tiles that have duplicates while the Military tiles are those that are unique. A variety of different games were and still are played with these tiles and the much more modern tile game of Mah-Jong evolved from Chinese Dominoes. 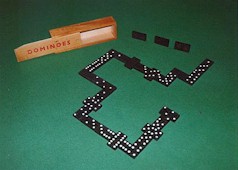 The game appeared first in China in in the 14th Century but the first recorded reference in Europe is from Italy where they were played in the courts of Venice and Naples. The tiles were originally constructed by gluing and pinning two sheets of ebony on either side of the bone tile. This prevented cheating by being able to see the pip value from the back of the tile in certain lights. It also served to produce nice contrasting white pips on black background by allowing the bone to show through holes in the ebony. The pin through the middle of the tile became known as the "spinner", for obvious reasons. Although tiles have not been constructed in this way for centuries, tradition has maintained the spinner which can still be found on many modern sets. Many players feel that it is still of benefit since it makes the tiles more easy to shuffle and protects their faces.

Although domino tiles are clearly of Chinese inheritance, there is debate over whether the game played by Europeans was brought by the Chinese to Europe in the eighteenth century or, in fact, was invented independently. European dominoes are shorter than Chinese ones and there is a single tile for each permutation of the throw of two dice or a blank making a total of twenty-eight tiles. This is the standard or "double-six" set and, as in China, various games can be played with it. Double-twelve sets (91 tiles) are popular in America especially since the rise of the popular modern game Mexican Train Dominoes and Double-nine sets (55 tiles) also exist. 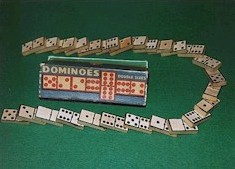 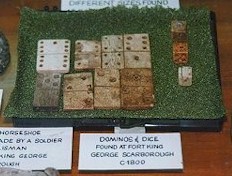 On the left, is a set of 1950's wooden Dominoes from the author's collection.

On the right, some dominoes and dice found at Fort King George, Scarborough, Tobago, in the South Caribbean around 1800 AD.

The game arrived in Britain in the late 18th Century from France (possibly via French prisoners of war) and quickly seems to have become popular in inns and taverns at the time. The word "Domino" is French for a black and white hood worn by Christian priests in winter which is probably where the name of the game derives from.

6 x 6 dominoes are easily obtained from any games shop in the west. For more unusual dominoes such as sets of 9 x 9 dominoes, Mexican Train Dominoes and 15 x 15 dominoes and even Giant Dominoes from Masters Traditional Games.

Domino-Games.com is a dominoes portal with a good breadth of information.