Draughts / Checkers and the Alquerque Family

The Origin of Draughts 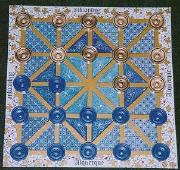 Alquerque, the venerable ancestor of Draughts, is played like Draughts on a 5 x 5 point board starting with the pieces almost filling the board in a non-symmetrical pattern. The game clearly had staying power - it is mentioned under the name of Quirkat in the Arabic work Kitab-al Aghani, the author of which died in 976 AD and in fact, this is the earliest certain evidence for the game from any source. Quirkat was first brought to Europe by the Moors during their invasion of Spain. It was recorded as Alquerque (Spanish form of El-Quirkat) in the Book of Games Manuscript which was written between 1251 - 1282 at the command of Alfonso X, King of Leon and Castile.

Alquerque-like boards can be seen carved into the stone slabs which form the roof of the great temple at Kurna, Egypt, built in 1400BC and this has led some to speculate a much older origin for the game. But a "graffiti board" might have been carved at any point since a building was constructed and it seems likely that this vandalism occurred much later during the Arab era.

The image of Alquerque shows a modern commercial version of the game owned by the author. The Madagascan game of Fanorona is a descendant of Alquerque. It seems to have been invented around 1680 AD and is still played today.

Board shown is a modern German version from the author's collection. 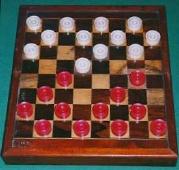 Sometime later, somebody decided to play Alquerque on a Chess board instead of the standard Alquerque board. This happened definitely prior to 1426 and seems most likely to have happened in England although some Spanish scholars claim it for Spain. H.J.R. Murray believed the genesis occurred in the 1100s but David Parlett's more recent history of board games puts it later with the first possible reference at 1380 in England. At the same time or not long afterwards, the idea of promotion was added - perhaps influenced by Chess. The new game was played with 12 pieces on each side and was called Fierges or Ferses at first although this changed to Dames later. Initially, the game did not force a player to take enemy pieces when the opportunity presented itself.

The compulsory capture or 'Huffing' rule that subtly makes the game much more interesting is attributed to France around 1535, the resulting new game being called "Jeu Force". At this point the old game without huffing became known as Le Jeu Plaisant De Dames or Plaisant for short. The first book written on the game was published in Valencia, Spain in 1547 and now resides in the Royal Library of Madrid. Jeu Force is the game played in England today under the name of Draughts and the game was taken to America and called Checkers. The first book in English about it was written in 1756 by William Payne, a mathematician from London.

The board to the left was made around the turn of the century. It is of a common design being able to fold in half to form a box containing the the pieces, when the board is stored. An English Draughts board is on the outside and a Backgammon board is marqueted within. From the author's parent's collection.

Draughts is known by different names around the world: 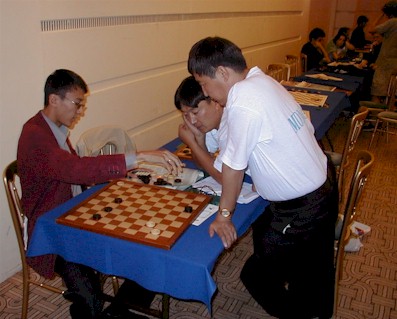 Most of the rest of Western Europe took to playing a different development of Le Jeu Plaisant De Dames is now the internationally recognised game of Polish Draughts or Continental Draughts. This game is superior in complexity to English draughts for the following reasons:

Polish Draughts isn't believed to have been invented in Poland at all - and it seems in Poland they know it as 'French Draughts'! Polish Draughts was probably the name given in order to make it sound slightly different to West European ears in the same way as for Chinese Checkers and Russian Billiards. The French claim the game was invented in Paris around 1727 and perhaps that is when the different rules all coalesced but.

Some areas of South East Asia go one better and play on a board of twelve by twelve squares and 24 pieces each side. The Canadian Draughts variant is also played upon a board this size. 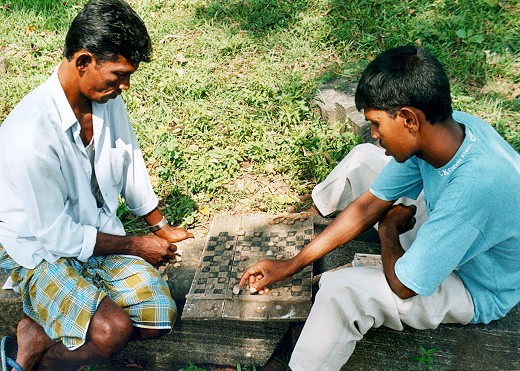 And here are a couple of Sri Lankans playing on a home made board in Anuradhapura. They have found some light and dark stones to use as pieces.

Masters Traditional Games sell a Giant Draughts set for the garden and/or public entertainment as well as quality 8 x 8 and 10 x 10 draughts sets.

Free rules for some variants of the game can be found at Masters Traditional Games.

In Holland, they play a game called Frisian Draughts in which they capture both orthogonally and diagnonally.  Dambond Fres Spiel is in Dutch.

Graham Kendall has written a page of research material on Checkers.