Four in a Row, more commonly known as Hasbro MB Games 'Connect 4' or Captain's Mistress is a ubiquitous but straightforward strategy game in which counters are dropped down vertical shoots with the objective of getting four counters in a row horizontally, vertically or diagonally.

It is not clear exactly when the first stacking Four in a Row game appeared. 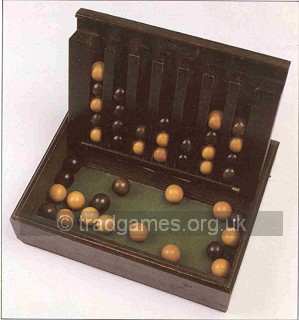 This is Robbie Bell's Four Balls game which he dated to the early 20th century.

The earliest claimed ancestry is a legend surrounding early explorer Captain Cook. It is stated that Captain Cook spent so much time stuck in his cabin playing the game against his fellow travellers naturalist Joseph Banks and botanist Daniel Solander on his voyages that it become known as the Captain's Mistress. The author has spent some time investigating the veracity of this but has found no evidence that it's true.

In a book by Robbie Bell, there is a picture of a 4 in a row game that he calls "Four Balls". It is a wooden game of reasonable quality made from Mahogany with beech balls for pieces that dropped into wooden chutes. Bell says that the date of the game is uncertain but he estimates that it is Edwardian c. 1901 - 1910. On the bottom of the game in gold lettering is inscribed "Remy Martin Cognac". The author has located an advertisement from the 1970s for the Remy Martin Cognac board and while he is loathe to disagree with R. C. Bell, who was a great games historian, in this instance it seems quite unlikely that the game does date from the early 20th century and more likely that it arrived on the scene a few years after Connect 4 first appeared... So whether the story was totally fictional; just a sales-led invention or if perhaps there is a grain of truth in it remains to be seen - please email if you come across any evidence either way... 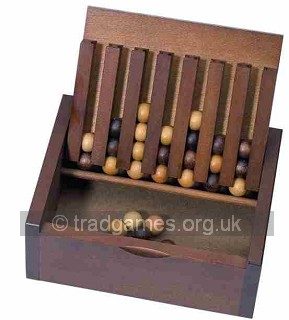 A Travel Captain's Mistress game by Nauticalia that sold until 2010.

More certain is that Milton Bradley (now Hasbro) started selling their massively successful version of the game called Connect 4 in February 1974 (1976 in Britain).

Could this therefore be an example of a game that was actually genuinely invented by a large games corporate? The pattern usually is that corporates claim they invented a game for years only for it to be discovered some time later that they either ripped off another game or bought out the inventor. Jenga and Monopoly are great examples of this but there are hundreds of others. In fact, it's almost a rule that corporates never invent anything original; they simply stitch up game designers. But perhaps this might be an exception to the rule...

A giant version of Four in a Row called Mega 4 in a Line. 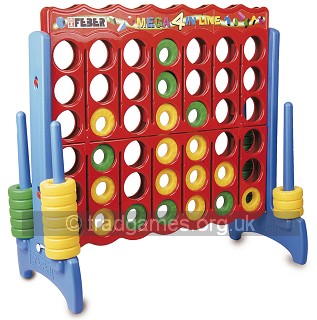 Apart from Hasbro's Connect 4, many modern games manufacturers make a version of Four in A Row from small cheap plastic travel versions to larger nicer looking versions in wood.

A trend from around the turn of the century has been the production of Giant versions of the game for parties - the UK company Garden Games market a version called 'Up For It' (previously branded Giant Connect 4 before they lost the Hasbro Licence). A longer running competing product from Spanish company Feber is called Mega 4 in a Line - another brightly coloured robust Giant version of Four in a Row that can be seen all over the place in garden centres and play areas etc. There are also wooden Giant versions that look rather more sophisticated.

The earliest evidence for a 3D stacking game - US patent by Theodore R. Duncan.

Stacking Four in a Row is part of a whole family of 'in-a'row' games that go back much earlier. The fundamental new concept that someone came up with was the idea of dropping the pieces, rather than simply placing them on to a board. Another game clearly related to Connect 4 etc. is a 3D version of the game. This was first sold by a company called Funtastic copyrighted to 1967 under the name Score 4 and again clones of it abound to this day - including the inevitable Hasbro version. The classic version of the game, however is made from wood and consists of a 4 x 4 grid of vertical poles sticking up from a board. Players drop wooden beads down the poles and the line of 4 can be made in any direction. 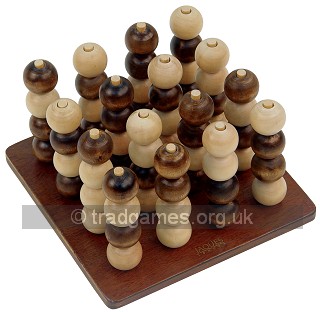 But, hang on, I hear the eagle-eyed reader cry, 1967? Well, yes it appears that this game arrived on the scene prior to Connect 4 in the early 1970s. So, if Connect 4 is the first appearance of the 2D version of the game, it was quite probably inspired by the 3D Stacking 'in-a-row games that existed earlier.

So it seems that the evolution of the dropping and stacking in-a-row game represents a rise and fall of complexity. Starting with Theodore Duncan's 3D Tic Tac Toe it was expanded to 4 x 4 version of the game; from that, the 2D dropping Four in a Row version was derived and today, that is the most popular game of this type around. 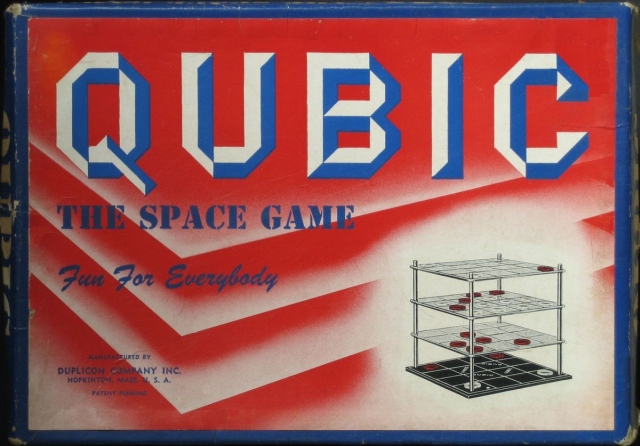 In fact, the dropping or stacking idea represents a dumbing-down of the in-a-row concept because the options are reduced for each player on every turn. For instance, other 3D Four-In-A-Row games have been produced in which the game play is on four different levels of 4 x 4 grids initially allowing a play to any one of up to 64 places, rather than being restricted to 16 columns. The best known examples of these are Qubic first produced by Duplicon in 1946 and Space Lines by Invicta Games that appeared in the 1970s.

Oddly, the Qubic box quotes a 1943 patent that details a 3D 3x3x3 'in-a-row' game, not the 4x4x4 game that Qubic actually was. There is a later patent for a 4x4x4 four 3D in-a-row game dated 1952 but the game was clearly in existence in the form of Qubic 6 years earlier than that. One can but wonder if it is a coincidence that the concepts of both stacking and non-stacking forms of 3D Tic Tac Toe came about within 2 or 3 years of each other...

More Four in a Row

Masters Traditional Games have a comprehensive range of Four in a Row games including Giant Connect 4 and Mega 4 in a Line.

More information about Connect 4 can be had from a relatively inexpensive book entitled The Complete Book of Connect 4: History, Strategy, Puzzles by James Dow Allen.