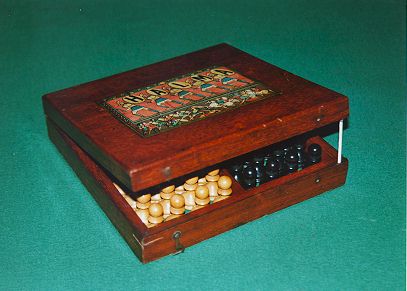 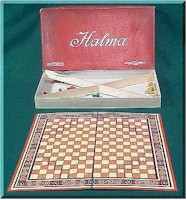 Most people consider that Halma is a Victorian British game and perhaps it was the Victorians who took to the game and made it popular. However, the Games historian Bruce Whitehill in the early 2000s undertook a quest to prove that Halma was American and indeed he found plenty of evidence to this end.

Bruce's article on the subject says "HALMA was invented between 1883 and 1884 by George Howard Monks, an American thoracic surgeon at Harvard Medical School. Robert Monks, brother of G.H. Monks, discovered the British game of HOPPITY during a trip to England in 1883 or 1884. He described the game to his brother George, who then took a couple of suggestions from HOPPITY and created HALMA, but not in such a way as to infringe on HOPPITY's copyright."

It seems that a mathematician and preacher called Thomas Hill, who later became president of Harvard, was also involved in the development of the game and it was he who came up with the name "Halma" which is Greek for "jump" (a story reminiscent of the game, Jenga, which means 'build' in Swahili, invented a century later). George Monks filed Patent number: 383653 on Dec 14, 1887 and it was issued in May 1888.

E.I.Horsman (see below) first published Halma but the rights to it were challenged in the courts by Milton Bradley. MB lost the war and ended up publishing a slight variant under the name "Eckha".

In England, F.H. Ayres included some rules in a handbook copyrighted in 1889, which is the earliest British record yet found by this author, and it was also published by Jaques, Spears and probably other manufacturers around this time.

The objective of Halma is to move all your pieces from your corner into the opposing corner. Each turn, a piece is moved to the adjacent square or, if possible, a piece can be moved by hopping over an adjacent piece into the hole the other side from where it can hop over another adjacent piece if such exists and so on. The game starts to get interesting when there are lots of pieces in the centre as a turn then will usually consist of a single piece making multiple hops over several pieces and moving some distance.

To the left is shown a box for holding Halma pieces owned by the author's parents'.

Next, a commercial board from the 1930s, 1940s. Picture by kind permission Kidd's Toys.

Below, a wooden Halma game owned by the author set up as for the start of the game. The origin of this board is unknown - anyone have any ideas?

Below right - the earliest American board that the author has come across was a simple cardboard version without the pieces. A sticker on the board read "Halma Pat. May 29 1888. Published by E.I. Horsman, New York. Copyrighted 1885". Bruce Whitehill believes that this was the earliest publication of the game. 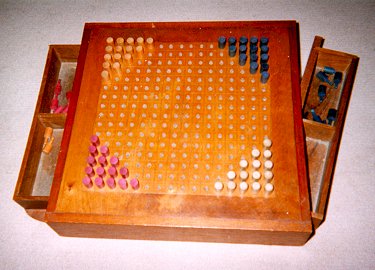 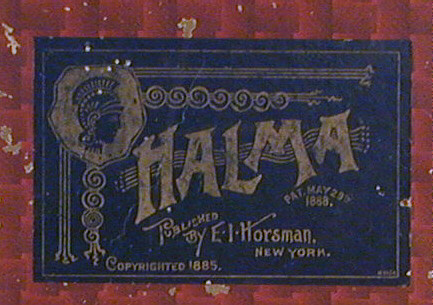 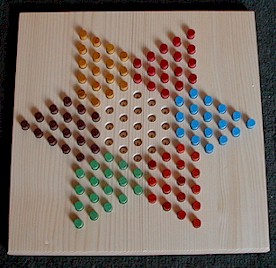 Chinese Checkers, disappointingly for historians, is no more than Halma transported to a star shaped board. It was first patented by Ravensburger, the famous German games company, under the name Stern-Halma in Germany 1892, only a few years after Halma appeared. Various unsuccessful versions turned up over the next few decades in the US, England and Germany until in 1928, J. Pressman & Co. published the game and it boomed. It was originally called "Hop Ching Checker Game" but it appears that the owners Bill & Jack Pressman renamed it as "Chinese Checkers" before it took off. There were legal wranglings regarding it's similarity to Halma and also the name "Chinese Checkers". Many copycat manufacturers have used the same name ever since and although Milton Bradley somehow managed to obtain rights to the name in 1941, this achievement didn't seem to affect anything in that regard.

In Chinese Checkers, which can be played by 2, 3, 4 or 6 people, each person starts with a set of uniquely coloured pieces in the point of one of the stars. The objective is simply to be the first to move all the pieces across the board and into the star point opposite. Pieces move a single point or else hop over other pieces in order to advance their pieces as quickly as possible. The middle part of the game becomes quite a challenge as the options for hopping vary rapidly as the game changes shape. The player who can best create and take advantage of hopping opportunities will tend to win. The game is both complex but is also easy to play and learn and the author recommends it as a suitable first game for very young children.

To the right is an attractive wooden board with wooden pegs bought by in Switzerland.

Rules for Halma and Chinese Checkers are available for free from the Masters Traditional Games website.