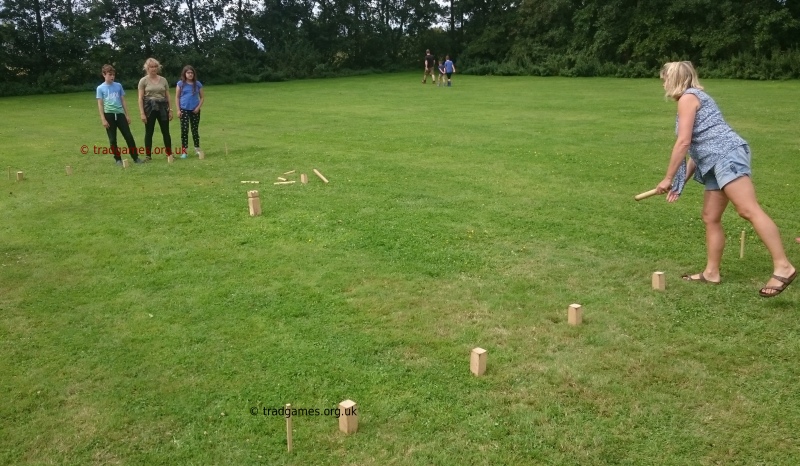 Kubb is a Swedish game whose history is not entirely clear. The game is unique and is a bit like a cross between skittles and lawn tennis.

The game is played upon a court of two sides, as in Tennis but without a net. Skittle pins are set up on either side. Each turn, the players on one side attempt to topple the pins on the other with 6 baton sticks. Those that are knocked over and picked up by their opponents are thrown into the other court where they are righted ready for the next turn. After much toing and froing, one side eventually manages to knock over all 5 of the skittle pins on the opposing side during their turn at which point they can attempt to win by topping the Queen skittle in the middle of the court.

The image shows a game of Kubb played by some of author and friends in Doddington, Kent, 2017.

The game is thus a fascinating combination of skill and tactics but, be warned, it can go on for some time if the sides are evenly matched...

One can speculate as to the origins of any game and indeed many people do. Kubb is Swedish for "wood block" and proponents of the game claim its history goes back to the Viking era, around 1000AD. No evidence has been seen by this author to support such a theory and it seems more likely that, in common with a number of other games such as Dutch Shuffleboard or Sjoelbak, the game is more likely to be an late 19th or early 20th century invention. Kubb is rapidly becoming an international concern with serious play occurring in many countries including Britain, Italy, France, Germany and the USA.

One interesting version of Kubb comes from Russia and is played using horse anklebones. The game is called Bunnock and is reportedly a game that came from the Russian army, the requisite equipment being readily available for bored foot soldiers on duty in Siberia. The Bunnock World Championships are played annually in Saskatchewan, Canada, the game having travelled with Russian immigrants to that region.

Kyykka from Finland and Russia

There is another skittles game called Kyykka or Karelian Skittles played across Sweden, Estonia and Russia (where it is called Gorodki) being particularly popular in Finland. The objective is to knock skittles out of a playing area by throwing enormous truncheons at them. The short squat skittles are set out in two opposing rows and players play from behind one row aiming at the line of skittles opposite. It's a great spectacle that is played in snow and sun all year round.

Kyykka is supposedly centuries old but was apparently dwindling until 1951 when the Finnish president sanctioned a revitalisation of the traditional sport. Since then it has grown and is now a successful and well-known activity throughout Finland with a World Championship played every year. In the latter half of the 19th century it was known as a Karelian tradition - Karelia is an area overlapping both Finland and parts of Russia.

This picture is from a 14th century manuscript entitled "Book of Prayers".

There is a clue that its history may well go back to medieval times because there are 2 or 3 English manuscripts with pictures of a game that looks extremely similar. This proto-skittles game, often known as Kayles, evolved through a variety of forms of nine-pin games resulting in the various modern forms of skittles found across England (and Europe) and also the now more ubiquitous American ten-pin bowling. Could it be that Kyykka is the most similar ancestor to the earliest form of skittles that was played more than 800 years ago?

Molkky and other modern Skittles variants 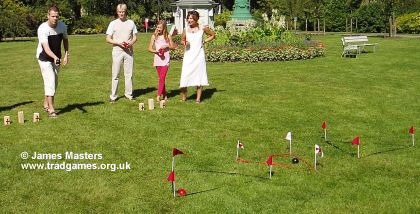 Another Finnish skittles game is Molkky which was invented in 1996 in Finland. It consists of 12 short skittles each numbered from 1 to 12.

Players or teams take turns to throw a stick at the pins which initially are stood in a clump around 4m from the throwing area. The key to the game is that if one skittle is knocked over, the score is the number on that skittle but if more than one skittle is toppled, the score is the number of skittles knocked over. It's a straightforward game but great fun

The game has started to develop in other countries too, as the Finns commercialised and exported the idea. In Britain, the Finnish version is played but two proprietary forms of the game have also appeared - Scattles and Smite. These products are similar but not identical to Molkky - presumably to avoid patent or copyright infringments.

Related modern descendants of these game are still being invented in the region. The one pictured here is Riddarspelet (Tournament of Knights).

The Gotland Kubb World Championship in English and Swedish.

Tournament of Knights from the game's inventor, Micael Hellberg

Buy Kubb and Tournament of Knights at Masters Traditional Games.