Mancala may well be the oldest board game in the world since, like Morris variations, it can be easily played with whatever medium happens to be around. For instance, in Africa, people often play with pebbles using hollows scooped into the earth, with cowrie or other seashells in rings in the sand or specially carved wooden board with seeds. It is a wholly mathematical game - its more complex versions have as much scope as Chess, despite its primitive origins.

Mancala board shown is from the author's collection.

Stone Mancala boards have been found carved into the roofs of temples in Memphis, Thebes and Luxor - the game was definitely being played in Egypt before 1400BC. It appears that the game might have evolved in Egypt from boards and counters which were used for accounting and stock taking; evidence for such record keeping boards having been found in even more Ancient Sumeria as well as Ancient Egypt. 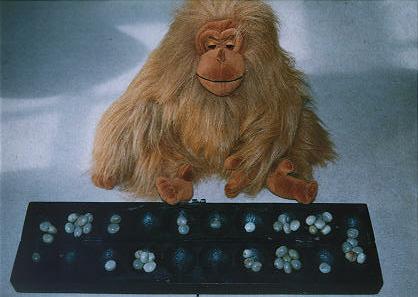 Mancala variations are played all over Africa, the two rank Mancala board generally being found north of the equator, the four rank boards, South of the Equator. They also are to be found throughout the Caribbean and on the East Coast of South America having emigrated with by slaves during the colonial expansion era. There are also versions in India, Sri Lanka, Indonesia, Malaysia ("congkak", pronounced Chon-ka) and the Philippines.

Bao, played in East Africa. This board was bought in Kenya by the author. The Orang-utan's opponent could play the single seed into the end pot thus receiving another go and then play the five seeds in pot 3 to take the six seeds from Orang-utan's pot 1.

Mancala is played by literally hundreds of tribes throughout Africa, most of whom play their own slightly different variation and have their own special name for it. In fact, to exemplify the difficulty in delving into this subject, here are some variants of the name 'Wari': To confuse things further, some names of Mancala games are generic referring to all Mancala games in a particular region rather than a particular variant. Generic names include Bao, Soro (Choro or Solo), Mangola, Gabata, Mulabalaba, Ayo and Sadeqa. Of course these can refer to specific variants, too.

The two best know Mancala games are Ayo from Nigeria and Wari which is played without much variation across West Africa and much of the Caribbean.

There are several main ways that Mancala games differ from one another. Most obviously the number of rows on the board differentiates Mancala games into three sorts - two rank, three rank and four rank Mancala.

Oware board, from Ghana. Oware is an internationally popular two-rank Mancala game.. This board, from the author's collection, was used in the first "Mind Games Olympiad" in London, 1997.

A second important differentiate is whether the game is single lap, multiple lap or has "Indian-style" laps. In single lap games, a go

consists of the seeds from one hole being picked up and placed in subsequent holes. In multiple lap games, if the last seed placed is in a hole already containing one or more seeds, the contents of this hole are then picked up and the seeds distributed in the same way again. A player's turn only comes to an end when the last seed of a 'lap' ends up in an empty hole. Indian style laps are multiple laps but at the end of each lap, the seeds from the hole following the hole in which the last laps' final seed was placed are taken for the next lap. The turn finishes when the hole following the hole in which lap's final seed was placed is empty.

In Uganda, they play Omweso, a four-rank game of some skill. The boards pictured were on show at the 4th Mind Sport Olympiad, Alexandra Palace, London, August, 2000. The rectangular board is typical of a Ugandan board while the other board is more ornate folding up to show a carved elephant and give a carrying handle. The game pieces are Empiki seeds. These come from the Omuyiki tree and are light but very hard.

The Sri Lankans play a game called "Olinda Kaliya" which uses Indian Style laps. The characteristic seeds used for the game, bright scarlet with black tips, are from this Olinda bush.

A typical Olinda Kaliya board belonging to the author is shown below. It's pretty small for a Mancala game. 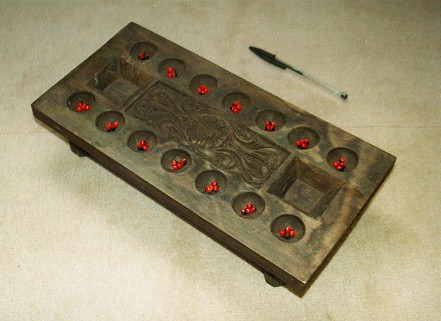 This is an Olinda bush observed in Anuradhapura, Sri Lanka.

Finally, we have a Sri Lankan table pictured in the reception of the Kandalama Hotel, Sri Lanka. It is made from Mahogany and is designed in the form of an enormous Olinda Kaliya board. The author is now the proud owner of this table - and the larger than life playing seeds that go with it. Make your own Mancala board from 2 egg boxes

The rules for Oware and a quite complex version of Bao can be obtained from Masters Traditional Games.

Mancala Boards of the British Museum by Patty A. Hardy - great pictures!