The Game of Wisdom (Snakes and Ladders)

This ancient race game, like Pachisi, originated in India although the author isn't sure when. The original Indian game goes by a variety of names corresponding to the different regions where it was played including Moksha-Patamu, Shatranj-al-Arifin, paramapadam but it is most commonly known as Gyan Chaupur or Gyan Chauper which best translates as the "Game of Wisdom" although in some forms it it might be better thought of as the Game of Enlightenment. It is a game of morality with the bases of the ladders being located on squares representing various types of good and the more numerous snakes coming from squares representing various forms of evil. The squares of virtue on the original game are Faith (12), Reliability (51), Generosity (57), Knowledge (76), Asceticism (78); the squares of evil are Disobedience (41), Vanity (44), Vulgarity (49), Theft (52), Lying (58), Drunkenness (62), Debt (69), Rage (84), Greed (92), Pride (95), Murder (73) and Lust (99). The game is Hindu and was used to teach children about the religion in that the good squares allow a player to ascend higher in the league of life whereas evil will reduce a player back through reincarnation to lower tiers of life. Presumably the last square, 100, represents Nirvana. 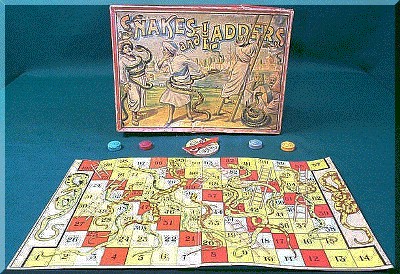 The morality of the game must have appealed to the Victorians, who took to the game when it was published in 1892 in England. Called Snakes and Ladders, the game play was pretty much the same but some of the vices and virtues were renamed according to Victorian ideals. So Penitence, Thrift and Industry elevated a player up a ladder to squares labelled Grace, Fulfilment and Success while Indolence, Indulgence and Disobedience slid a player down to Poverty, Illness and Disgrace. The number of ladders and snakes were also equalised.

The game still exists in the West (and in India?) but in the West the moral overtones have disappeared and many versions are a lot easier because the ladders outnumber the snakes.

Snakes and Ladders is available in almost all game shops. I don't know of a version that includes the morality words.

Masters Traditional Games sells a Giant Snakes and Ladders game for the garden.