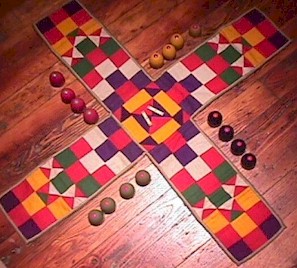 Pachisi (also spelt Parcheesi, Pachisi, Parchisi, Parchesi; also known as Twenty-Five) is the National Game of India. The name comes from the Indian word "pacis" which means twenty five, the highest score that could be thrown with the cowry shells. Pachisi is, in fact, the younger sister of Chaupar (or Chausar or Chaupad, also known as Pat in Sanskrit), a more venerable, complex and skilful game that is still played in India.

The Indian Emperor Akbar I of the 16th century Mogul Empire played Chaupar on great courts constructed of inlaid marble. He would sit on a Dias four feet high in the centre of the court and throw the cowry shells. On the red and white squares around him, 16 beautiful women from the harem, appropriately coloured, would move around according to his directions. Remains of these boards can be seen today in Agra and Allahabad.

The image of the board to the right is courtesy of Mihrab Antiques and shows colourful cloth board with the distinctive beehive-shaped Chaupar pieces. 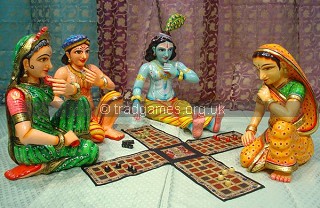 There is a mention of Chaupar being played between two sets of princes - cousin brothers of the Bharata family (Pandavas and Kauravas) in the epic, Mahabharata. During this game the righteous Padavas lost the game and their entire fortune to the devious Kauravas, which put his family through a lot of hardship and suffering. This was ended by a great war among them which led to destruction of the Kauravas. It is since that time that the play of this intelligent game has dwindled due to a superstition that it leads to pain and suffering... [Thanks to Mayuresh Kathe for this note].

The board shown right is a modern interpretation sold by Masters Traditional Games. On the left, a modern traditional material board from India by kind permission of Raghu. 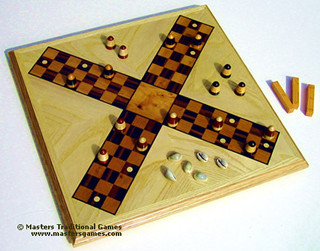 The origins of Pachisi and Chaupar are lost in time but uncertain evidence indicates that forms of the game were in existence in the Indian region from at least the 4th century AD. Both have hardly changed since Emperor Akbar played although the game is not as widely played in India as it once was. Pachisi boards are typically constructed of cloth, 6 cowry shells are thrown to determine the moves and the counters are made of wood in a beehive shape.

Pachisi is a 'Cross and Circle' game, variations of which appear all over the world e.g. Nyout from Korea which probably dates back at least as far as 300AD, Pancha Keliya from Ceylon and the elaborate 'Edris A Jin' from Syria. The Americas are supposed to have been colonised from North East Asia and this evidence is supported by the fact that Cross and Circle games have been found across North and South America. Mayan games have been found from around 800 AD cut into ruins in Mexico and when Europeans conquered the Aztecs in 1521 they discovered a game similar to Pachisi being played by Montezuma's subjects. American Indians still play Cross and Circle race games today.

Variants of Pachisi are still played all over the world. A variant called Tock from Canada involves using playing cards to derive the movement instead of dice, as does a similar game called Jackaro from the Middle East. 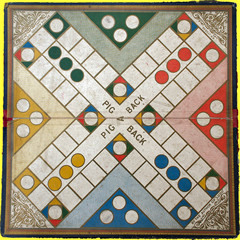 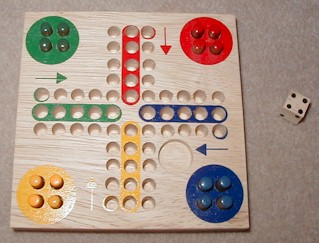 In 1896, a westernised version of Pachisi was published in England under the name Ludo (Latin for "I play"), a game which has been popular in that country ever since. The game however, is a highly simplistic version of Pachisi for children. The author has evidence that shows that a game called "Puchese" was published at the much earlier date of 11 April 1862 in England.

There is another less well-known descendent of Ludo called Uckers. The OED's earliest reference to this game sums it up well: "1946 J. Irving Royal Navalese 180 Uckers. A game very similar to Ludo, and played on a large board by teams of three or four men. " In fact, Uckers is a grown-up version of Ludo played with 2 dice instead of just one. This reverts it to being much closer to it's ancestor Pachisi and the decisions as to which piece to move for each die bear comparison with Backgammon, too. 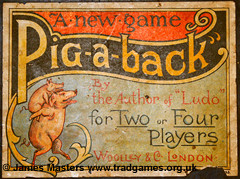 To the left is picture and label of the game Pig-a-Back which is dated 1891. It must be a derivative of Pachisi that did not take off. Kindly contributed by John-Henry Collinson.

To the right is pictured a miniature wooden game of Ludo owned by the author.

In America, there is evidence for home-made boards and boards without a clear origin from the 1850s. A dubious story credits the invention of Parcheesi to Sam Loyd who supposedly sold the rights to the game for $10 at one point but since Sam Loyd was a notorious self-publicist and deceiver, it is probably best to ignore this account. The earliest definite record is that John Hamilton of the Hudson River Valley claimed copyright to the game in 1867. Rights were sold to one Albert Swift who then sold them on to Selchow and Righter in 1870 and this famous company trademarked the game in 1874. Parcheesi went on to become the bestselling game for Selchow & Richter Co. for decades.

In Germany, the game is known as "Mensch-ï¿½fï¿½fï¿½,ï¿½fï¿½fï¿½,ï¿½,ï¿½fï¿½fï¿½fï¿½,ï¿½,ï¿½fï¿½,ï¿½,Â¤rgere-dich-nicht" ("Don't-be-angry,-man") which was published in 1910. The Dutch "Mens-erger-je-niet" means the same thing. In Spain, there is "Parchis" and in France, "Le Jeu de Dada" or "Petits Chevaux". Italy has "Non t'arrabbiare" meaning "Don't get angry!" or "Don't lose your temper!". All of these versions are simplified childrens versions like Ludo. Stylised versions on a travel theme are played in Switzerland ("Eile mit Weile" - a game originally published in the late 1800s in Germany) and Italy ("Chi va Piano va Sano!").

Cheap modern versions of Pachisi/Chaupar like Ludo can be found in most game shops.

Masters Traditional Games also has a free rules archive that includes Pachisi and Chaupur and Ludo.