Unfortunately, despite much searching, this author has found minimal material on the European game of Pin Billiards. It could be a derivative of Carom Billiards - at some point in the past, somebody may have decided to add some skittles to their usual game to spice it up and the result was Pin Billiards and possibly, Bar Billards too. Alternatively, it might be a direct descendant of the original Billiards game - Port & King Billiards wherein the hoop was dispensed with and the skittles multiplied. There seem to be two main forms of the game - Italian Five Pin Billiards (played on a table without pockets) and Danish Pin Billiards (played on a table with pockets) but it isn't clear which came first. The latter is played pretty much only in its home country whereas Italian Five Pin Billiards is also known as International Pin Billiards, presumably as a testament to the fact that it has spread to many other countries of central Europe and also South America.

The author is keen to obtain more information on the origin of Pin Billiards and Bar Billiards. If you have any information, pictures or insight that you can send, it would be much appreciated.

The Danish game, known as Keglebillard in Denmark is played on a table which is the same size as a full-size Carom Billiards table, but with six pockets as per Pool or Snooker. In the middle of the table there are 5 pins, set in a ring. The game is played with 1 red ball and 2 white balls, just like Billiards but unusually, both players use the red ball as the cue-ball in this game, instead of the white balls. Points are scored by knocking over the pins for 2 points each and/or by "making the red" which means cannoning off both whites. Points are not scored by pocketing the balls at all.

Danish Pin Billiards largely restricted to its home country but is also played in Sweden.

The picture is from the 1999 Danish Pin Billiards Championship. 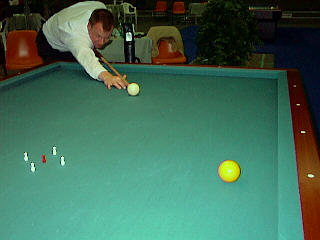 International or Italian Five Pin Billiards originated in Italy but is now very popular in such countries as France, Germany, Denmark and Switzerland. Known as 5-Birilli in Italy, the game is played upon a standard Carom Billiards table with the addition of 5 small skittles placed in the middle of the table.

The pictures are from the 1999 Pin Billiards Championship in Denmark (in which both Pin Billiards variants are played). Many thanks to Jimmy Lauridsen of The Danish Billiard Federation for both images.

The game is simlar to the Danish game, the two main differences being the lack of pockets and the fact that the red ball is not the cue-ball in this variant. The same three balls are used (although sometimes a coloured ball is used for the second cue ball) but with two cue balls being utilised in the same fashion as for Billiards. Players aim to hit their opponent's ball and from there score points by canoning onto the red ball and also by making the opponent's and/or the red ball knock over the skittles.

In Italy, a slightly expanded version of 5-Birilli is played called 9-Birilli or Goriziana with, you guessed it, 9 skittles.

Yet another version appears that is called Boccette played with 4 white balls and 4 red balls upon the 5-Birilli table with the same 5 skittles..