Please see the full Quoits page for the full history of outdoor Quoits from which the Indoor game derives.

While two versions of Outdoor Quoits have managed to make it through the trials of the late 20th century, an indoor 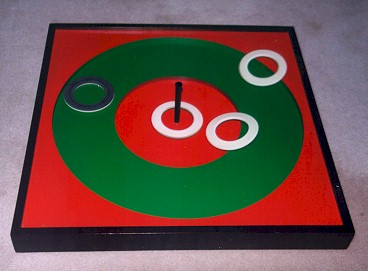 version of the game has also managed to thrive around the debatable border between Wales and England.  The heart of indoor quoits beats loudest in pubs around Powys, Wales and Evesham, England but it is also popular in Gloucestershire, Worcester and Hereford in England.   The history of Indoor Quoits, Evesham Quoits, Table Quoits or Dobbers is not at all clear but the best guess seems to be that somebody decided to invent an indoor version of the outdoor game towards the end of the nineteenth century.

The board shown is from the author's collection.

The game is a cleverly miniaturised version of the outdoor game. It uses rubber rings and to make up for their lack of shape, one side is coloured black, the other white and any quoit which falls black side up, doesn't score. The Quoits board is generally around 18 inches square but can be up to 2 feet square and has a central stake surrounded by two indented concentric rings. The scores of the stake, and the two rings vary according to the location and the game being played - rather like Darts, it seems that more than one game is played using the same equipment. The standard game would just be a straight race to the final score of 61 points (scored on a cribbage board) but, in Powys particularly, an interesting variant using a special scoreboard is popular, in which each number up to 13 can only be scored once by the first player who manages to score that number in a turn.

An indoor relation of Quoits also deserves a mention. Called "Rings", it was popular in the North West of England during the 1930s and consists of a board with numbered hooks at which rubber rings are thrown.

The rules for quoits and rings are available free from Masters Traditional Games.

You can buy the traditional Indoor Pub Quoits game and Rings from Masters Traditional Games.