Quoits is related to another early pub game, the throwing of horseshoes at a pin in the ground. Some theories have it that Quoits developed from Horseshoe pitching as a formalised version of the sport. Horseshoe pitching is still played today, and is particularly popular in certain regions of the USA, the rules being similar to those of the Northern Quoits 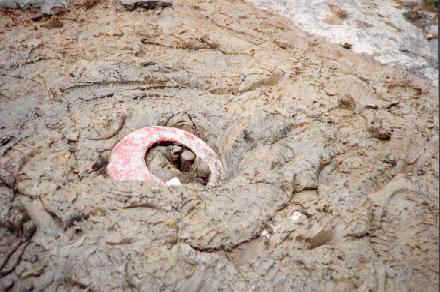 The theory espoused by the National Quoits Association is just the opposite. A quoit in ancient times was synonymous with a discus, and so they believe that Quoits and discus are one and the same thing and that Quoits was therefore one of the sports played at the first Greek Olympiad. They also suggest that the Greeks passed on Quoits, a weapon of war, to the Romans who also brought the game to Britain and that the origins may go back even further to the Minoan empire c.2000B.C. where the boy king of Knossos apparently used the discus to cull escaping slaves. Horseshoe pitching in this case came about as a poor-man's version of Quoits using left-over horseshoes instead of the real thing. This theory seems rather dubious in this author's opinion because, well, a discus is not a quoit, either in shape or purpose...

Whatever the origin, the game was certainly being played in England early in the second millennium in roughly the form known today wherein metal rings are thrown up and down a pitch with target pins at either end embedded in areas of soft clay. It seems to have been associated with agricultural and working class people, in particular with the mining industry. Quoits of this era generally were made from poor-quality left over metal from mine forges and this is why main areas of quoit playing seem to have centred around mining communities.

The Long game has a long pedigree and has its stake flush to the clay, which presents an interesting dilemma for historians - did the other versions of quoits where the pin sticks prominently out of the ground derive from it and then evolve the pin out of the clay or did they develop separately or prior to the long game?

The picture to the left shows a ringer from the celtic Long Game with the embedded pin clearly visible. Picture kindly donated by Mrs. Linda Evans, Secretary, Welsh Quoiting Board.

Earlier than 1388, references are vague but quoits was designated as illegal in the Sporting Regulations act of that year. By the 15th Century, there is evidence to show that it had become a well organised sport, not least because of the numerous attempts to eradicate it from the pubs and taverns of England due to it's reputationally seedy character. Not until the nineteenth century is the game documented in any serious way but the game grew in popularity during that century and the official rules first appeared in the April 1881 edition of 'The Field' having been defined by a body formed from pubs in a large area of Northern England.

The Association of Amateur Quoits Clubs for the North of England was the name give to the official body that laid down the 15 rules that were published in "The Field" in 1881. This set of rules constituted what is now called The Northern Game and it has remained largely unchanged ever since. Although the Northern Game has lost some of it's popularity, it is still played seriously and enthusiastically in the North of England under the auspices of The National Quoits Association which was formed in 1986 and is undergoing something of a resurgence of late.

The game has the hobs (stakes that the quoits were aimed at) 11 yards apart in 3 feet squares of clay, the maintenance of which is quite an art, it seems. Originally, players used an iron quoit which weighed about a pound but regional variations resulted in quoits which reportedly weighed up to 23 lb. which may or may not be an exaggeration. In the Northern game, nowadays, quoits measure about 5 1/2 inches in diameter and weigh about 5 1/2 pounds. Some of the terms commonly used in the Northern game are: 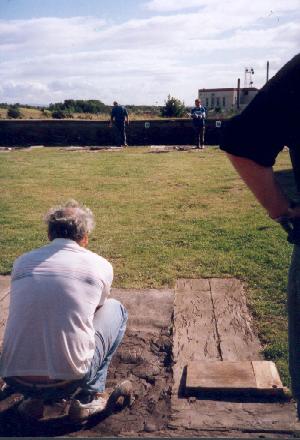 Quoits however, is a split sport, much like the game of Rugby, because independently, Wales and Scotland have long been playing a distinctly different game with a similar proud history. In fact, "The Long Game" or "The Old Game" is also played in parts of England, notably East Anglia and Liverpool , but is far more rare in that country as the new century begins.

In the Northern game, if more than one quoit lands on the hob, then only the top quoit scores whereas in the Long Game, the scoring is simply that a player scores a point for each quoit nearer to the pin than his opponent. The reason for this is that the pin in the Long Game is knocked down flush with the clay surface so encircling the pin is not really a significant part of the game. The Long Game then is more akin to Bowls in play with the pin acting as a simple target. However, this simplicity belies the difficulty of the game which, in common with many celtic sports, is a test of strength as much as skill. The hobs are 18 yards apart, fully 7 yards greater than the Northern Game while the quoits are typically around 9 inches in diameter and weigh up to 11 pounds, almost double that of the Northern game. 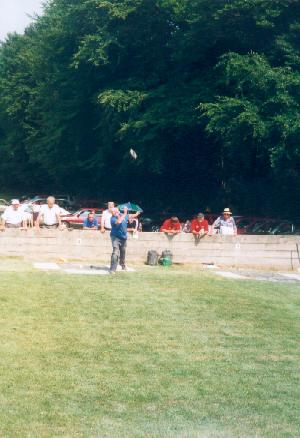 To the left, a "lighter" carefully sets a piece of paper on the clay as a target for his waiting partner to aim at. Picture taken in Prestwick, Scotland.

The next two pictures are from the Scotland/Wales international held in July 1999 at Pumsaint in Dyfed, Wales.

To the right, a member of the Scottish team hurls the heavy quoit down the 18 yard pitch; below, a close call is scrutinised by the competitors

An article in the Renfrewshire Gazzette, Saturday, Jan 9 1954 shows some interesting information [with gratitude to Brian Keanie of Canada]. "Almost unnoticed the firm of Johnstone Forge Ltd closed its doors for the last time at the end of the year, and by doing so finally severed one of the last remaining links with that fine old Scottish game, quoits. This small engineering smithy run by the Houston family was the only firm in Great Britain to make quoits. Indeed the name of Houston is known the length and breadth of the land in this connection." It seems likely that the reporter was exaggerating slightly and Houston was the only maker in Scotland rather than Great Britain but one can still imagine that the loss of such a critical constituent of the game must have had a devastating effect.

Scotland first played England in 1930 at Parkhead and Wales in 1931 at Merthyr Tydfil.   The last Scotland/England international was played in the 1960s but Wales and Scotland still play a hotly contested match every year.  Scotland has around a dozen clubs - still under the control of the Scottish Quoiting Association. In 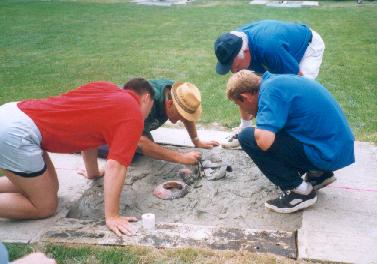 Wales, the game is concentrated in a few clubs based around Dyfed and Powys.  For some reason the Welsh Quoiting Board (Bwrdd Coetio Cymru) fizzled out around 1960 but it was reconstituted in 1979 and is now affiliated to the Welsh Sports Council.  Both bodies are keen to expand their game in terms of membership and for many years hoped that other countries, notably England, will eventually be able to send a team to the annual International match. STOP PRESS - it seems that in 2006, a compatible team from England (Liverpool) may finally make the trip. Accordingly the 2006 event is being called the "Inaugural British Open Quoits Championship" to be held in Pumpsaint on Saturday August 26th.

The long game is still played in England at the turn of the century but in a modified form that sees the quoits reduced in size and somewhat different rules being adopted. The English stopped fielding a side at the internationals some time ago presumably because the differences between the two variations had grown two large and the gap could not be easily bridged. The East Anglian game is unique in that ringers score a clean two points regardless of the opponent's efforts and are immediately removed prior to the next throw. Quoits on their backs and quoits that land inclined in a backwards direction are discounted and also removed immediately. The quoits tend to be smaller than those used in the Scottish and Welsh games but the distance is maintained at 18 yards.

The author would like to extend his thanks to Mr. Sid Watkinson, whose Grandfather was Champion of England in 1904, and to Steve Clarke for going out of their way to help with information on the East Anglian game.

The difficulty of maintaining the clay squares and the muddiness that can occur on a wet day makes genuine traditional quoits a rare sport. However, all is not lost because for many decades people have been playing a more simple version by simply putting 2 stakes in a lawn. Organisers of fetes, horse fairs and similar public functions sometimes set up temporary quoits pitches in this way and such games are often referred to as Sward Quoits. Sward Quoits has it's own varying complexities depending upon the type of ground being played upon and the height of the hobs and so forth. People wishing to play quoits in their back gardens or any open space happily emulate Sward Quoits in the same way.

A traditional miniaturised version of Indoor Quoits has existed around the Welsh/English border for at least a century and a game called Rings was popular in the North in the 1930s.  For more information, please peruse the The History of Indoor Quoits page.

While all the above traditional English games survive to the modern day, many modern variants can be found using either home-made equipment or interpretations from modern manufacturers.  Deck Quoits played with quoits made from rope has been a popular pastime on cruise ships for decades.   Rope Quoits, which is presumably the same game, has recently become a trendy outdoor activity, especially in Australia.

The USA has a burgeoning Quoits community around New Jersey although the distance they put between the quoits seems to be much reduced at 21 feet (7 yards).  Another derivative seems to have become popular around Pennsylvania where the hobs are set 6 yards apart on slightly angled slate boards instead of clay beds. The heart of this game is an area called, for obvious reasons, "the slate belt", populated by people of primarily English and Welsh descent. Pennsylvania also has some clay bed pitches.

Canada, too, has enjoyed a surge of Quoits interest throughout the 1990's that seems to be centred around Nova Scotia and Ontario.  The sport is also played in Colombia under the name Tejo.

Many people have written to me asking for the official rules of quoits.  The rules of the three traditional Quoits games given above plus Sward Quoits and American Slate bed quoits can now be obtained free from Masters Traditional Games.  Two variants of Indoor Quoits are also available.

You can buy Steel quoits, Deck quoits and many other types of traditional Quoits game from Masters Traditional Games.

You can buy the American slate bed quoits game from "Quoits Direct" .

The History of Indoor Quoits
The Ancient Game of Quoits - by Linda Evans, Secretary of the Welsh Quoiting Board. The author would like to thank Linda for her help with the information on this page and commends her very interesting site on the History of Welsh quoits.