The Royal Game of Ur & The Game of 20 Squares

Boards found in Ancient Sumeria, in the royal tombs at Ur (~2500BC), Mesopotamia made during this period seem to be some sort of race game. The ancient Sumerian name of the game is not known although it is often referred to as the Royal Game of Ur. 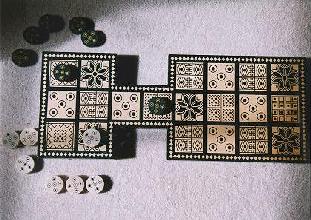 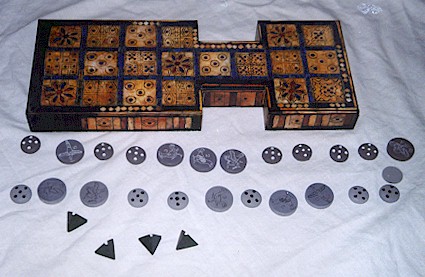 The images show modern commercial interpretations of the Sumerian Game from the author's collection.

The second picture shows a replica of a game found in a royal tomb at Ur dated around 2600 BC which makes it one of the oldest game boards in existence. For some time it was thought to be the oldest board ever found and while that is not true any longer, the original, truly a special item, is displayed in a place of honour at the British Museum.

The rules of the game as it was played around 2500BC are not known at all but the same boards were still in use a century or two before the birth of Christ and archeologists have discovered the rules for the game played at that time on some cuneiform tablets dated at 177/176BC. Game historians have argued and conjectured as to how the game might have been played. The early games show a variety of patterns on the board but the consistent factor is that five rosettes always appear on the same squares on each board leading most people to suppose that only the rosettes are significant. But, as can be seen from the pictures, some boards have different symbols within the squares. The other symbols seem to be more than just decoration - they are quite clearly denoted and artistically consistent with the rosettes so it seems possible that these symbols also meant something. So, it's this author's guess, given that the formal gaming authorities presumably didn't exist, that there were probably several popularly played sets of rules going around and also, as likely as not, several types of board. Perhaps the boards found in the tombs, being royal, had not only more ornate boards but also more ornate rules to match?

One factor that has been controversial is the path that the counters take around the board but H.J.R. Murray's original guess is the most elegant. He suggested that entry is made on the row on the fourth square from the left (in the top right picture) going left. One player enters on the top row, the other on the lower. When the counter reaches the corner, it moves to the middle row and travels along. When it reaches the penultimate square in that row it turns again going to the opposite row to that which it started and then travels around the outside of the 2 x 3 rectangle before returning back down the middle row and off the board into the gap whence it entered. This makes a path of 27 squares or 28 moves if you count the bear off the board. A shorter version of this, favoured by myself, has the pieces departing from the board into the same gap but immediately after the fourth rosette - a path of 16 squares, the 17th being to bear off. For both of these conjectures, every fourth square of the path is a rosette which also matches the Game of 20 Squares design show later. Irving Finkel, who knows more about the game than anyone else, favours an even shorter route of 14 squares (15 moves) which is the same except that it avoids the 2 squares on the opponent's third of the board although this path means that a rosette is not found on every fourth square.

The nature of the rosettes is also up for debate. They could be squares to be avoided - maybe they send the counter back to the start or forced a player to pay a fine into a central pool of betting money. Or some authors have suggested that they are safe squares where a counter cannot be caught (but this seems unlikely - the suggested tracks taken by the counters mean that some rosettes are in places that the opponent cannot reach so no need for safe squares...). Or another likely idea is that landing on a rosette gave the player an extra turn. Whatever, the fact that they lie four squares apart from each other suggests that the number four was important. Since the game was played with 3 binary pyramidal lots which give a number from 0 to 3 each throw, many people therefore believe that a throw of 0 would allow the player a move of 4 squares. So, for instance, if H.J.R.Murray's path is used along with the idea that landing on a rosette gives another go, it would be possible by repeatedly throwing fours to get a counter all the way home in one turn.

The non-royal game of Shahr-e Sukhteh

In 2004, archeologists found an old game in the 5000 year old ancient Iranian city of Shahr-e Sukhteh (Persian for "burnt city") which many people have called the oldest version of Backgammon ever found (but this is spurious - there is no logical ancestry from this game type to Backgammon). Dating the finds at this site is very difficult but the likely date for these boards is 2800-2600BC. The find included a rectangular board made of ebony, pieces made from turquoise and agate, and dice. The design of the board features an engraved serpent coiling around itself to produce the requisite 20 squares.

Tau or The Game of Twenty Squares

The Sumerian boards appear to be the ancestors of boards found at Egyptian sites which are 1500 years younger and on which the Egyptian Game of Twenty Squares was played, presumably in a similar fashion. The boards sometimes came in the form of a box inside which the pieces were held - often these boards had a different gaming pattern on the reverse side - usually a Senet board. The pattern for the game is similar to that of "Ur" - at one end a block of 4 x 3 squares lies and then extending from the middle of one side of 3, lies a row of 8 more squares. It is as if the Egyptians moved the 2 blocks of 2 squares on either side at the other end from the edge to the middle row. The 3 rosettes are found in the same places on the 4 x 3 block with another at the far end of the "handle" and a fifth positioned centrally between the other 2 rosettes on the middle row.

Parlett, in the Oxford History of Board Games makes no mention of the name 'Tau' (which both Bell and Murray quote) but instead says that an inscription says the name is "Aseb". This is not an Egyptian word and so the guess is that it is derived from Ancient Sumerian.

Recently and astonishingly, a Game of Twenty Squares has been found in a Jewish enclave in India.

There is another relative in this family of extremely ancient games which is played on a kind of doubled up form of the Game of Twenty Squares. Only three examples of this board have ever been found and as with the 2 games above, it is not known how to play it.

You can buy the Royal game of Ur from Masters Traditional Games.