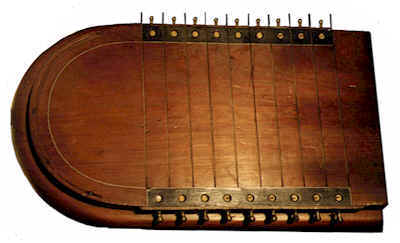 Earlier versions, which were played in Taverns at least as early as the fifteenth century, have been known as Shoffe-grote (when the coins used were Edward IV groats), Slype Groat and Slide-thrift and these were all played in a similar fashion to Shove Ha'penny but with different coins of the period during the sixteenth and seventeenth centuries.

The picture shows a beautiful antique wooden Shove Ha'penny board from the collection of John Rushby-Smith, Ledbury, England. Many of this type of board were made - featuring rotating scoring markers on either side. Some came with brass lifts and some were without. The manufacturer has not yet been discovered.

In the game, players take turns to push coins up a board with horizontal lines across it. The areas between each pair of horizontal lines are called a "beds" and the objective is to push the coins so that they land squarely in the beds without touching the horizontal lines. To win, a player needs to get a coin in each bed 3 times which is no easy task for the beds furthest away from the front of the board. If a player manages to score three coins in one bed in a single turn, he is said to have scored a "sergeant" and if all five coins should score in a single turn, it is a "sergeant major" or a "gold watch".

The board on the baize is owned by the author. The hinged brass lifts are clearly seen demonstrating how they can be raised out of the slot to determine whether a coin lies fully in a bed or not. 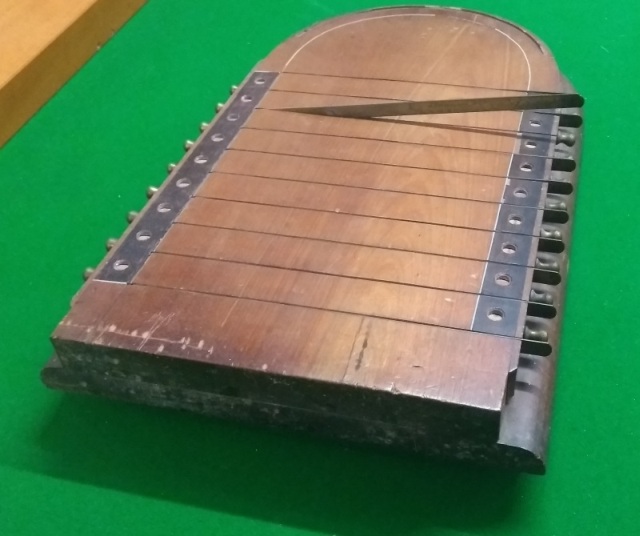 Shoving is most commonly done with the heel of the hand although other techniques include the palm, the side of the thumb or the tips of the fingers are all used. A variety of substances can be used to make the board sufficiently slippery - French chalk, black lead, beer, paraffin and petrol are all used. Each coin has one side smoothed down flat and in theory this should be the tails side of the coin since it is illegal to deface an image of the monarch in England. However, many leagues maintain a contrary view in respect of this and smooth away the head side instead. This mark of disrespect also serves to leave the date of the coin visible and an ideal set of coins would have the same date on each coin...

Shove Ha'penny came into existence around 1840 and would originally have been played on any flat surface that could have the requisite lines inscribed on it but the official board these days should be made of slate or hardwood with indented lines defining the beds. The more expensive boards have rails embedded in the dents which can be lifted out of the slots in order to determine whether or not a coin is completely within a bed or not. If the coin moves it does not score.

The slate board shown is a commercial board together with it's original wrapping, purchased approximately during the 1930's. From the author's parent's collection. 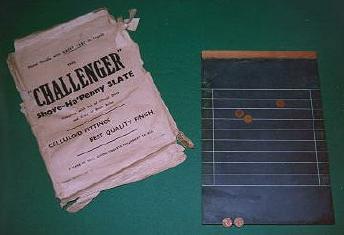 Around the Oxford area, a variant called Progressive is played in which a player is allowed to retrieve and re-play any coins that score. In this way, a lengthy turn of numerous continuation shots would occur for skilled players in a manner akin to a break in Billiards, Snooker or Croquet. Skilled players can even win in a single turn which must be a bit depressing for an opponent who is unfortunate enough to lose the toss against such a player.

Push-penny is still being played around Stamford, Lincolnshire and uses three old English pennies, somewhat larger than a ha'penny. Boards are made from Mahogany or Oak and each one has its different idiosyncracies. The game is much the same as Shove Ha'penny and the locals organise a "world championship" which is played during the Stamford festival at the end of June/beginning of July each year. 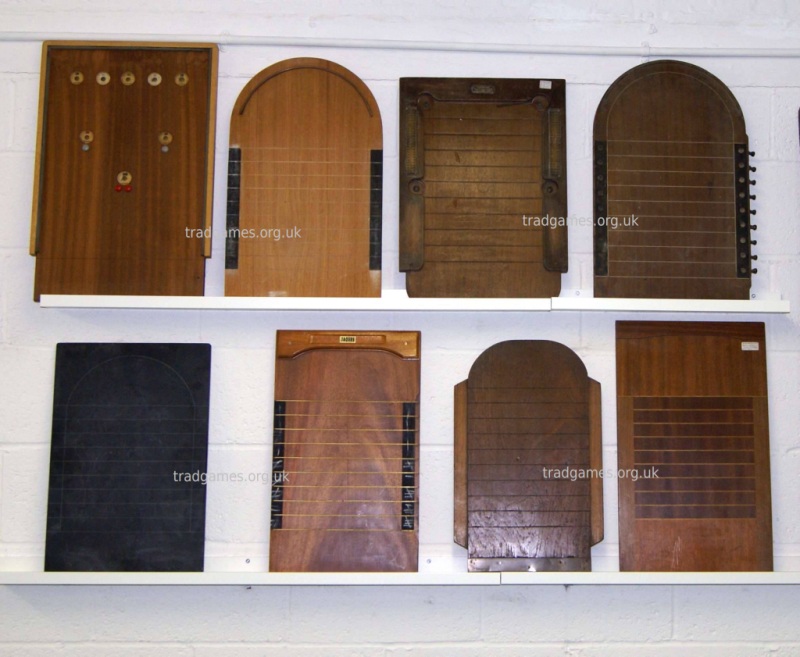 This is part of the author's shove ha'penny collection

The author was contacted in August 2001 from Swaziland about a burgeoning Shove Ha'penny group in that country. Started originally in the early 1980s by Peter Thorne, the owner of the Malandela pub in Malkerns, Swaziland, he reported that the game was increasing in popularity around that country. In 1995 and 1996, teams from Swaziland were sent to The Wheatsheaf, Leckhampton, Cheltenham, England to compete in the annual Shove Ha'penny World Championships.

I've had numerous requests for the official rules of Shove Ha'penny.  A free description and rules can be found on the web at Masters Traditional Games.

A huge thanks for this go to Paul Mattick of RaDiSH (Ryde & District Shove Ha'penny League). The following is a list of local terms and expressions used, many of which are in common usage throughout Britain.

AWAY (1): A call to warn a player that his scoring ha`penny is occupying a bed already filled and will be awarded to his opposition.
AWAY (2): Anything relating to a house other than your own (e.g. away slate, away venue, away fixture etc.)
BED: The scoring area between the vertical and horizontal lines of the slate.
BOARD: A slate.
BOTTOM: The non scoring area of the slate nearest the player
BOTTOM BED: The first bed on the slate (nearest the player). The one bed, No 1 etc.
BRING BACK SHOT: Causing any ha`penny to strike another in such a way as to cause it to travel backwards.
BRUSHED: Beaten by one or more empty beds. Empty-bedded.
CANNON: Causing a ha`penny to strike another and score but in so doing causing the struck ha`penny to travel forward and score against a further ha`penny.
CHALKER A person appointed to record players scores on the slate during a game. A Marker.
CHALKS Lines in chalk recorded on the edge of the slate to indicate how many ha'pennies have been scored in a particular bed.
CUSH The side lines which ha'pennies must not touch or cross if they are to remain in play. The Rails. The grass.
DISC A round metal playing piece with a hole in the centre used as an alternative to a ha'penny.
DOUBLES Relating to players playing as a pair. Pairs.
DRAW To play a ha'penny in such a way that it scores without touching another ha'penny. To float. To paint To dewdrop (rare).
FLOAT See draw.
FOLLOW-ON A game in which scoring ha'pennies are returned to the player to play again until he fails to score. Newmarket.
FOLLOW THROUGH A ha'penny that continues to travel forward after striking another ha'penny that should have stopped it dead.
FULL HOUSE See Gold Watch
GO THROUGH See follow through.
GOLD WATCH To score with all five ha'pennies. Five. Full House .
HAND A Durham term for a players turn.
IN A call indicating a ha'penny has scored
LAY A ha'penny so positioned on the slate that by playing a ha'penny directly behind it, that penny will score. To take a lay or hold a lay
MARY To score with all five ha'pennies. Gold watch. see also Virgin Mary (Isle of Wight)
MARKER See Chalker
NINETEEN An expression indicating that a player has failed to score with all five ha'pennies. (also used in Cribbage)
OFF (1) An expression indicating that a ha'penny is touching a side line and is therefore out of play.
OFF (2) The start of a game
OUT-SHOT The winning shot. the winning score as in "three out".
PARISH The area of the slate where scores are still required.
SCUDDS A rather unkind expression (but you may hear worse!) unsportingly said under one's breath, meaning that you hope your opposition fails to score.
SHANGHAI A game in which numbers are written at the side of each bed and players play in turn for each bed in succession adding the number of the bed to their score for each ha'penny they score on it.
SHOT The playing of a ha'penny. A turn or hand. an expression meaning "Good shot"
SHOT-OUT The winning shot. Out-shot.
SIDE The side of the slate on which a players score is recorded.
SIDE-SHOT To cause a ha'penny to strike another on the side making it travel forwards and sideward thus scoring off a ha'penny diagonally in front of it.
THE DEE An obsolete area adjoining the top bed of a slate where, in an older version of the game, a player had to score a coin before he could start the game proper.
THE GO Remaining equal. Still in front after the opposition's shot. the first shot of the game.
THICK When a coin is covering too much of a bed to provide a lay.
THIN Opposite of thick.
TICKLE To strike a ha'penny gently with another causing it to travel sufficiently forward where it had been previously touching a line.
TIGHT A ha'penny that is too close to a line to score. Requiring a tickle or touch.
TOP BED The top bed of the slate furthest from the player. The Attic.
TOP EDGE The area of a ha'penny above it's centre that when struck by another ha'penny will cause the first to travel backwards. A top edge shot.
TOUCH Same as a Tickle
VIRGIN MARY To score with all five ha'pennies by floating or drawing i.e. no five coins come into contact with each other(Isle of Wight)