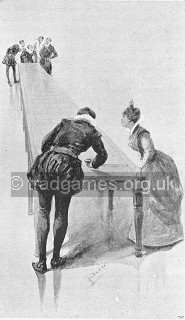 The original English ancestor of most of the games involving shoving discs of some sort on a table was called Shove-board and later Shovel-board. Popular in Tudor times, Shovelboard was played by the English upper classes on enormous narrow tables as long as 30 feet (9 metres). Players shoved metal weights down the tables, attempting to get them as near to the other end of the table without falling off. Presumably, the game is a formalised version of a pastime played on the long dining tables of the upper classes after dinner. One of the earliest references is from the Royal Privy Expenses of 1532 which show that Henry VIII lost Ł9 to Lord William at Shovelboard. Meanwhile, the subjects of this great King were banned from playing this and most other recreational games - an even earlier reference purportedly of 1522 says "None of the society shall play at the game called Shoffe boorde or Slypgrote".

By the 1800's Shovelboard had been abandoned by the aristocracy and nowadays, Shovelboard tables are confined to museums in England but it's direct descendant Shove Ha'penny still thrives and major derivatives also developed in Europe and in America.

In England, during the 15th century, an indoor version of Shovelboard for play in taverns developed called Shove Groat or Slype Groat and this has been played ever since, evolving into the game known today as Shove Ha'penny.  Please see the separate page for more information. 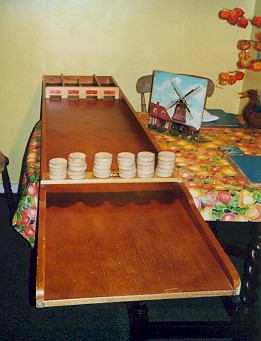 In Holland, the game of Sjoelbak or Sjoelen came about probably in the late 19th century.  In this, 30 disks are aimed down a six foot table in an attempt to get them through 4 arches numbered 1 to 4 at the other end.   However, a cunning twist compels players to attempt to get an even number of disks through each arch because each set of disks in all four compartments scores double.  The target arches at the end of the table are similar to certain Bagatelle derivatives leading some people to suggest that the two game may be related. Certainly games where balls are aimed at boards with arches have been popular for many centuries but nobody has yet proved that Sjoelbak is related to any other game at all. 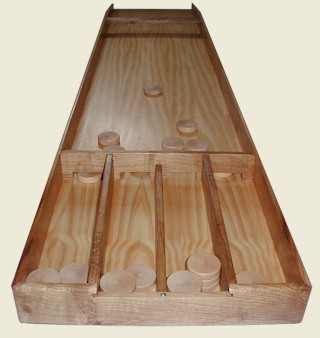 The game has always been big in Holland and Belgium and has also spread to Germany where it is commonly known as Jakkolo after Jakko Schmidt who first made the game famous in that country.

Hand-crafted Sjoelbak boards are handed down from generation to generation and family social events will often culminate in an hard-fought game. Sjoelbak is an occasional sight in the USA and in Britain. Some pubs do possess the game, although the author is not aware of any British leagues, yet.

The picture of the Sjoelbak board to the left was kindly donated by Lucy Billington of London. Lucy's family is Dutch and this is the board that is faithfully brought out each Christmas for everyone to play on.

The most famous manufacturers of Sjoelbak boards are Homas and Schilte, both of whom mass-produce the game in continental Europe. The board pictured to the right was bought by the author from Masters Traditional Games who sell beautiful hand-crafted Sjoelbak boards that are made in England. 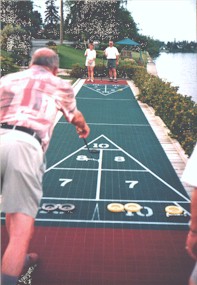 The old game was revived in a deck form in the 1870s when it began to be played by the rich on the decks of ocean liners. US immigrants, who presumably enjoyed Deck Shuffleboard on the trip to the "new continent", continued to play it on the ground upon reaching their destination. This new game of Outdoor Shuffleboard, became quite popular in early 1900's and numerous advocates still play today. Large disks are pushed using special "cues" which are effectively long sticks with a curved T-piece at one end. The target is a triangular area at the opposite end with sections that score differently. It's a unique game.

Outdoor Shuffleboard is also played in Australia, Japan and some European countries.

The picture to the left was kindly donated by Gaetan Gilbert of Shuffleboard for the Planet in Canada.

It's sister game, however, is just as popular although originating from the less sulubrious surrounds of the amusement arcades. Indoor Shuffleboard or Table Shuffleboard is the modern descendant of Shove-board that most resembles it's forbear. In it, disks are pushed down a table that can be more than 10 feet long with the objective of causing them to stop between target areas that span the width of the board at the other end. The target areas at the end of the board score the most but disks that go off the end don't score at all, of course. A variety of games have been devised for the Shuffleboard table and this table game is today reasonably common in American bars.

Several Sjoelbak boards are available from Masters Traditional Games. From a smaller, fun-sized board for children up to a a beautiful hand-crafted board made from Chestnut and Oak wood.

There are quite a few Table shuffleboard sites out there but most of them are quite locally oriented.  The following are more generic with good links.