It's not known for sure where Shut the box originated.  Most theories point to a source in Northern 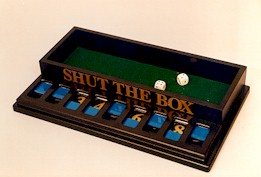 France and give Normandy or the Channel Islands as the specific location.  It appears that it has been played in this region for at least two hundred years and is a game popular with sailors and fishermen.  There is only evidence for the game in England from the middle of the twentieth century, and since most games of a similar ilk spawned references in a variety of literature, this would seem to be a good indication that it did not originate in that country.  In fact, Timothy Finn in his "Pub Games of England" says that that the game was brought to the South of England from the Channel Islands in 1958 by a Mr. 'Chalky' Towbridge.  The game has several names, one of which is Canoga and one unconfirmed rumour claims that Shut the Box is also common in Zambia!

An old pub gambling favourite, Shut the Box uses two dice and a special wooden playing tray. The tray features the numbers 1 - 9 in a row, each of which has a hinged or sliding cover. A turn involves repeatedly throwing the dice and shutting or covering a number or pair of numbers every throw. The turn ends when no numbers can be covered upon the throw of the dice at which point the player's total is calculated. The overriding goal is to completely cover all numbers or "shut the box" which results in the best possible score of zero.

In England, during the 15th century, an indoor version of Shovelboard for play in taverns developed called Shove Groat or Slype Groat and this has been played ever since, evolving into the game known today as Shove Ha'penny.  Please see the separate page for more information.

Masters Traditional Games sells various Shut the Box games including a Sailor's Dice Box which incorporates a nice Shut the Box game with several other Nautical dice games such as Crown and Anchor.

Rules can be obtained for free from Masters Traditional Games.