The Oxford English dictionary has the following reference to "squail":

2. pl. A table-game in which counters or disks are propelled towards some mark by snapping. App. introduced in 1857 by Mr. John Jaques, London.

The author has also verified from historical records that Squails was first published by John Jaques of London on 26 April, 1857 and there doesn't seem to be any evidence of the game prior to this. So the conclusion is that Squails is an entirely proprietary game invented by this famous game manufacturer at this time. It later appeared in the USA published by Milton Bradley Games in 1867 accompanied by a set of highly dubious marketing assertions about it's long history...

The old English game of Squails was played on a round table and the objective was to hit discs with the heel of the hand from the edge of the table at a small lead target in the centre called a "jack". If the jack was moved more than six inches it was replaced. Once all sixteen Squails had been played, they scored 16 for the squail nearest to the target down to 1 for the squail furthest away. Often, a squail would be directed with the aim of knocking an opponents squail away, as much as to end up near the target, in the same manner as for bowls. 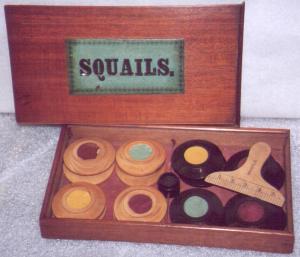 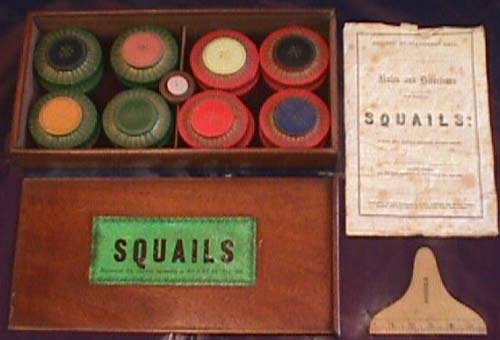 The pictures show two sets of antique Squails sets from the 1890's. The one on the right is by John Jaques of London and has the original swoggle and jack. Pictures by kind permission Alvin's Vintage Games. 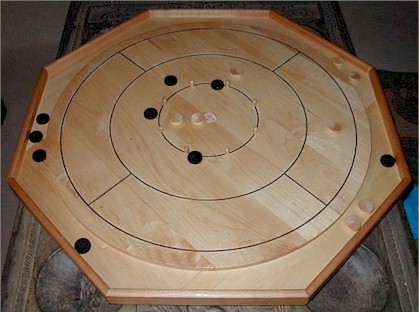 Of the same family, although the relationship is uncertain, is Crokinole, a game developed in Canada which is now increasingly popular across all of North America. In French Canada it is sometimes known as Pichenotte (pronounced "peesh-nut") although this seems to have been the result of a historical confusion between Crokinole and another game called Pichenotte similar to Carrom.

The board here, from the author's collection, was made in Canada.

The unusual and aesthetic game board is about 30" across, traditionally octagonal with the playing surface inside circular so that outside the surface is a gutter into which the disks can be knocked out of play. In the centre is a shallow hole and around it three concentric rings, the innermost of which has on it eight evenly spaced little posts which provide obstructions for the disks to bounce off. The objective is to send your own disks into the hole, a feat which scores 20 points, but just as importantly to prevent your opponent from doing the same. Each turn, a player must flick a disk so that it first hits an opponents disk, the aim usually being to knock the opponent's disk into the gutter around the board's edge while ensuring that the player's disk ends near to the centre, if at all possible. The three rings score 5, 10 or 15 points if the disk lands within them respectively. 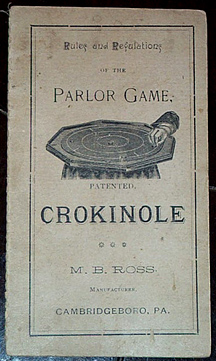 There is some considerable debate concerning the origin of this game. Although the evidence seems to lie with a Canadian origin, some proponents firmly believe it originated in the USA and various other theories float about including one that asserts a direct descent from Squails and another that it is a German Mennonites invention. Take your pick but to assist you here are some facts for your delectation:

The author believes there are multiple examples of the earliest USA board - the 1880 M.B.Ross game. These three pictures are of the board, the trade stamp and the booklet of that board by kind permission of Jeff Adkins of the USA. 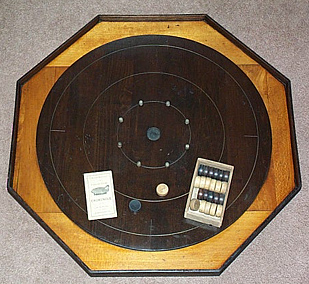 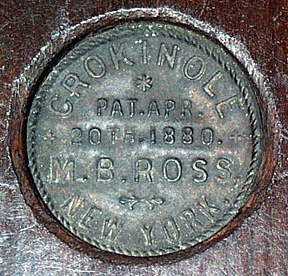 In North America - particularly in Canada, there are a number of competing firms who sell the game including Mr Crokinole below.

Mr. Crokinole, Wayne Kelly also has a splendid variety of Crokinole related paraphernalia. In addition to this website, he has done a lot of research into the game and produced a book on the subject.

The World Crokinole Championship site includes a history section which has a feature on probably the oldest known Crokinole board which was made by one Eckhardt Wettlaufer in 1876.