There is no mystery about the origin of the various games of table-top skittles shown on this page - they are miniaturised forms of the larger pub game of Alley Skittles or Nine Pins. For more information on the these origins including the history of Skittles and where to buy and play Alley Skittles, please see the Skittles page. Alley skittles itself splintered into a number of regional variations and, since a skittles alley takes up a large amount of valuable floor space in a pub, in some areas varieties that did not require alleys at all appeared. Most of these amounted to table-top, miniaturised versions of the alley game and several games of this type are still well-known and popular today.

Devil Amongst the Tailors

The most famous of table-top skittles games is indisputably the game known as Devil Amongst the Tailors or Bar Skittles or Table Skittles or Indoor Skittles. 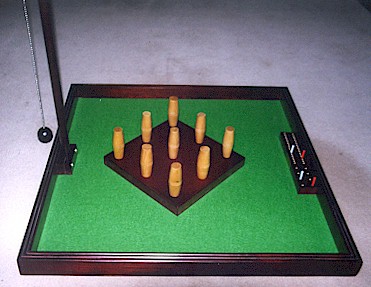 This distinctive game appeared in the 1700s and was cleverly miniaturised so that no throwing strip was required at all - the nine pins standing on a square table were knocked down by a ball which was swung around a pole, instead. 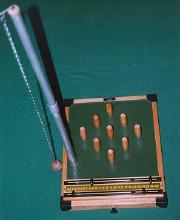 In 1805, some theatre-goers and tailors rioted at the Theatre Royal, Haymarket over a play that the tailors thought insulting. The Dragoons were called in to stop the riot which they did in such an enthusiastic way that their method was compared to the wooden ball ploughing through Table skittles by the local press. After this incident Bar Skittles was often referred to as 'Devil amongst the Tailors'. 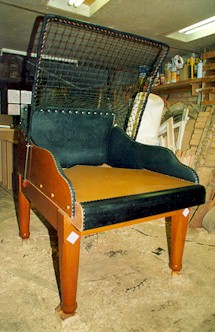 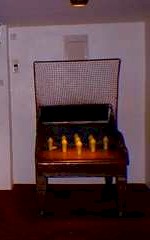 Hood Skittles is a miniaturised version of Old English Skittles (please see the Alley Skittles page for more information on this venerable game) in which cheeses are thrown at pins on a table about 8 feet away. It is extremely popular Northamptonshire and well known in Leicestershire, Bedfordshire and surrounding counties. Confusingly, in the East Midlands, the came is always referred to as Table Skittles while outside this area, it is not well known and Table Skittles tends to mean the smaller game described in the previous section.

The surrounding leather bound and cushioned sides of the table offer the option to bounce the cheese off them before hitting the pins thus obtaining angles not possible in other games while the hood prevents wayward cheeses and pins flying off into other parts of the pub. Most people who've played, consider Hood Skittles to be one of the most enjoyable English pub games around so it would be well worth popping into a pub featuring the game if you ever have the chance.....

To the left is a modern Hood Skittles table made by a traditional games maker from Leicestershire. Top right is an example of Northants Skittles ready for play, courtesy of Paul Kirkby of the Shuckburgh Arms, Northamptonshire. Below right are the tall pointy skittles and Lignum Vitae cheeses of Leicester Skittles with the kingpin clearly shown. 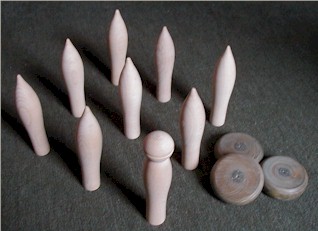 There are two varieties of the game. The more well-known Northants Skittles features stubby bomb shaped skittles while Leicester Skittles has taller pointy topped skittles with a kingpin. There are other minor differences in the size of pin position and cheese but ostensibly the games are pretty similar. 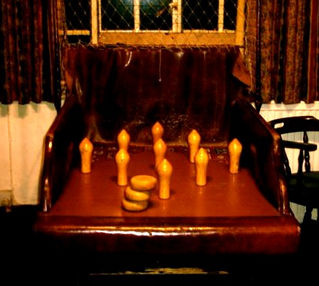 The author is grateful to Bruce Ward who plays Northamptonshire Skittles at the Red Lion, Corby. He kindly sent in the picture of their fine table to the left and said "Here it is in all its' glory, after polishing and ready for a league night. It was certainly there 20 years ago when I first moved into Corby, and no doubt it was there well before then. It's been cared for (apart from the legs, don't know what happened to them) and lovingly polished since then, and is still in daily use by customers of the pub, and by league players at least four nights each week".

Daddlums is a Hood Skittles variant in which the cheese is normally thrown so that it lands near the front of the table and then slides forward until it strikes the skittles. The table is smaller than that of Hood Skittles, from which it is presumably derived and it is only known to be played in one pub in Kent.

Table A Toupie or Toptafel 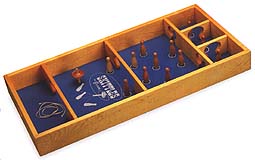 The author initially heard about this game from Americans who wrote to say they were trying to find a supplier of the game. It has been handed down the generations in North America for more than a century. The game consists of a several small rooms laid out on a board - designs vary somewhat. Skittles are positioned amongst the rooms and a top is then sent spinning from one end of the table in an effort to topple as many of the skittles as possible. Each skittle scores (or sometimes deducts) differing numbers of points and success is largely a matter of luck. 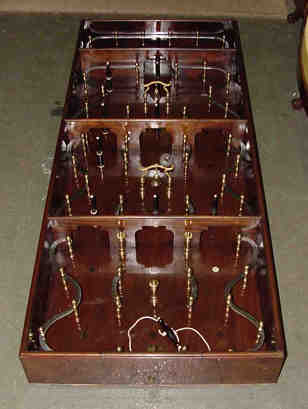 As the author has discovered more and more about the game it's apparent that a great deal of uncertainty reigns, not least as to precisely what the game should be called. In the USA, it is somewhat confusingly known simply as "Skittles" - this is possible because Americans don't play the original game of Skittles or Nine Pins - only ten pin bowling, it's direct ancestor. One person wrote to say that the game was called "Racketeer" while another wrote to say that he was attempting to restore an old game believed to be French from around 1850 and that the English owner from whom it had been bought referred to it as "Devil amongst the Tinkers". More research has established that the game is alive and still popular in France, Belgium and Holland. In France it's known as "Table A Toupie" (literally Table with Top) although one vendor also refers to it as "Jeu de Roi" (Game of Kings) and in The Netherlands it's called "Toptafel".

Then, in Aug 2001, an auction house wrote with a picture of an exquisite gaming table featuring a wealth of different games. The table is from France during the reign of Charles X, dated approximately 1820. One of the games (shown on the right) was the most beautiful Table a Toupie game with multiple intricate brass fitments and little bells to ring as well as skittles to topple. It is a piece that would have certainly originally belonged to French nobility.

The final piece of evidence discovered so far is from the famous book by Joseph Strutt - "Sports and Pastimes of the English people". From his text, believed to have been first published in 1801, comes a description of a game called "Devil Amongst the Tailors". But instead of the game with the ball and pole, Strutt describes in some detail (and, in fact, with some scorn - he obviously considered it to be a game worthy only of children) Table A Toupie! So like many games of this era, it seems likely to have originated in England or France but it's not clear which. Interestingly, though, while the French still manufacture and play the game, it's now all but unheard of within the British Isles.

Description and rules for Devil Amongst the Tailors, Hood Skittles and Daddlums are available for free from Masters Traditional Games

Where to Buy Table Skittles

You can buy a Table Skittles (Devil amongst the Tailors) game from Masters Traditional Games.  Full size Skittles sets and Northamptonshire Skittles equipment is also for sale as is the rare Toptafel game.