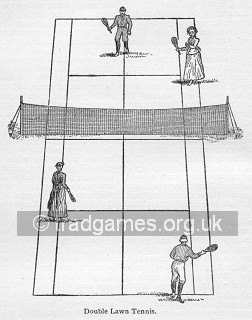 Table Tennis began, like so many other indoor sports as a miniaturised version of another popular sport during the latter part of the 1900s. In short it was originally just another parlour game designed for Victorian children and families.

Although Jaques and other manufacturers have claimed to have invented the game, these assertions are no more than typical marketing hyperbole. Several works clearly imply that a home-made form of the game was being played on dining tables during the 1870s by Victorians - using battledores and whatever was to hand for a net (a line of books is a favourite quote). This theory is muted by a lack of evidence but the earliest factual claim found by the author is from a book by Gerald Gurney in which a Ping Pong postcard is mentioned with a date of 1878.

A decade later, John Jaques, the venerable games maker best known for Croquet and Chess, patented a game in 1888 called Flitterkins which was a 'Tiddleywinks' game involving counters on a small board that were flipped backwards and forwards over a low net. 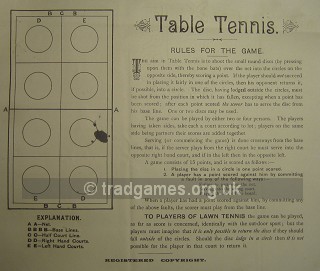 in question. Another tiddleywinks game as illustrated below was published in 1895 in England by Thomas Chell under the name of Table Tennis [as first revealed on this web page] but the earliest such item is also the earliest documented reference to the term - a board game entitled 'Table Tennis' is in the 1887 Parker Brothers (USA) catalogue.

The first 'physical' parlour Table Tennis turned up in 1890 as part of a compendium of similar Table games patented by an Englishman called David Foster. The game was a beautiful example of the detail of such parlour games featuring miniature strung raquets, a rubber ball covered in cloth, a net strung across the centre of the court and two much larger nets on either side to prevent the ball straying off the table.

A similar idea was first produced one year later in 1891 by John Jaques in the form of a game called 'Gossima' (trademark registered in 1890) which featured a net strung between 2 brass posts that clamped to a table, a cork ball and 2 battledores of a similar type to those used for Battledore and Shuttlecock.

Around 1900, Jaques re-released the game with the title 'Gossima or Ping Pong'. The name 'Ping Pong' is the cause of some debate among historians and there have been a variety of contradictory claims made for it. The earliest dated use of the term is the postcard mentioned - 1878. On the new Jaques game, Ping Pong was almost written as an afterthought in smaller writing. Soon afterwards, Jaques changed this to 'Ping Pong or Gossima' with the emphasis and larger text now on the Ping Pong and before long, Jaques dropped the name Gossima altogether. Various other texts make it clear that 'Ping Pong' was a phrase in general popular use well before 1900 and so it seems more likely that Jaques were persuaded to the term by the people rather than the other way around.

From 1900, the game suddenly took off and there were several manufacturers all producing versions of Table Tennis. Other versions were called Netto, Ding Dong, Pim Pom and Parlour Tennis. F.H Ayres produced a game called 'Table Tennis' and Slazenger were making 'Whiff Whaff'. Over 100 years later, the major 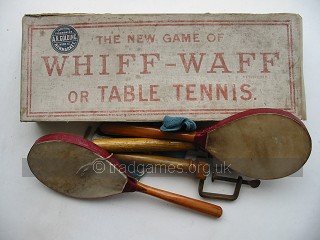 of London, Boris Johnson, claimed in a speech about the 2012 Olympics that "Ping Pong is coming home" because it was invented by the British in the 19th century and "called whiff whaff". Although the thrust of his assertion was correct, the reference to Whiff Whaff is a lesson to everyone that you shouldn't believe everything that you read on Wikipedia...

The example of Whiff Whaff to the right is by kind permission of the author's friend, Richard Ballam. The game used vellum bats.

The success of the game from 1900 is almost certainly down to the use of better equipment. During 1900 James Gibb from England discovered that a ball made from celluloid was a great improvement over previous versions with just the right bounce and weight to make for a good game. In 1902 another Englishman E.C.Goode put dimpled rubber on his bat, which allowed him to put more spin on the ball and bats of this type were used for the next half century.

The popularity of all these versions of Table Tennis soon led, as these things often did in England, to the creation of an organised body to promote and administer the game. In 1901 two organisations turned up, one called the 'Table Tennis Association' together with its rival the 'Ping Pong Association', both formed within 4 days of each other.

The Ping Pong Association appears to have been strongly affiliated with Jaques, who owned the trademark for the name 'Ping Pong', and its retail partner in respect of the game, Hamleys. This author speculates, therefore, that the competing organisations may have been part of the ongoing commercial war between the two biggest games manufacturers at the time - Jaques and F. H. Ayres - given that the Ayres version of the game was called 'Table Tennis'... Regardless, in 1903, the two organisations merged to form - perhaps due to pressure from players of the game or more likely because it made better financial sense to promote with a united front.

The new organisation was called "The United Table Tennis and Ping Pong Association". But, like many games before and since, within a few years the fad had subsided. Less than 2 years after its inauguration, the new body was disbanded and Table Tennis did not progress much for the next couple of decades. 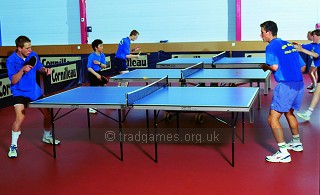 There isn't much around to explain the lengthy malaise in Table Tennis until the early twenties. But there is a strong likelihood that it was due to being stifled by the continuing business interests of Jaques and Parker Brothers (the latter owned the rights to the term 'Ping Pong' in the USA). This excerpt from a 1977 Encyclopaedia tells the story: "A British firm ... sold the American rights to Parker Brothers of Salem, Massachusetts. The monopoly of the game by these two companies and their dictation of rules and equipment led to a revolt by internationally organised players in 1921. As a result, the un-patented name Table Tennis was adopted."

In 1922 'The Table Tennis Association' was reconstituted and the laws were standardised within England. The game was also taking off in Europe. Four years later, Table Tennis finally came of age as the new International Table Tennis Federation (ITTF) was inaugurated in Berlin and the First World Championships were held in London, England. From that point onwards, Table Tennis progressed like many other modern sports with improvements to the equipment, amendments to the rules and the increasing skill of players. In 1952, Hiroji Satoh of Japan won the World Championship, his superiority in part being due to the use of a new-fangled style of bat covered in thick sponge rubber, variations of which have been used ever since.

Table Tennis became a fully fledged Olympic Sport status in 1988. In the year 2000, its vast popularity and commercial importance were demonstrated by an increase in the diameter of the Table Tennis ball which slowed the speed of the ball significantly - a rule change that was almost entirely tailored for a television audience.