Games of the Tafl family are distinguished by the unequal size of the opposing forces. The objective is usually for the force of fewer numbers to take all the members of the larger forces whose aim is generally to stop them doing so.

A fragment of a gaming board of 18 x 18 squares, found in Wimose, Fyn, Denmark dated prior to AD400 is the first evidence of a game called Tafl, which also regularly appears in the early Icelandic sagas. 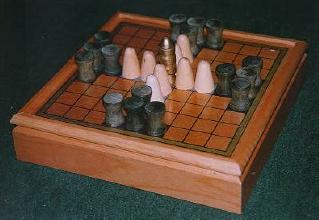 Tafl developed into Hnefatafl (which literally translates as 'Kings Table'), which was played by the Saxons as well as other Northern Europeans on the same size board and which is mentioned in Icelandic sagas from the beginning of the fourteenth century. The Vikings took the game with them on their forages which helped it to spread far and wide. A Latin text written during the reign of King Athelstan (AD 925-40) describes the Saxon form of Hnefatafl which was played in England at the time. It was most popular in Northern Europe during the dark ages until Chess started to take over during the 11th Century and the last references to it being played are in Wales in 1587 and in Lappland in 1723. It isn't known exactly how either Tafl or Hnefatafl were played.

Evidence shows that the game of Tablut, described by a traveller called Linnaeus during his trip to Finland in 1732, is likely to have been very similar to Hnefatafl. It is played on a 9 x 9 board with one player controlling a King who starts in the centre and who is supported by eight blonde Swedes versus the other player who moves sixteen dark Muscovites. All pieces move orthogonally like a Rook in Chess, one players objective being to move the King to one of the corners, the others to take the King.

The Tablut game shown is a modern commercially available representation of Tablut from the author's collection. 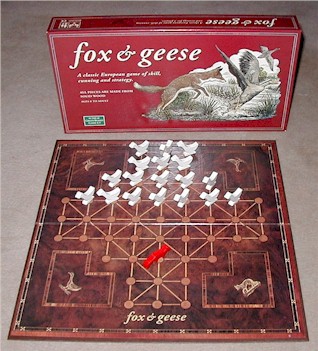 Fox and Geese is a descendant of Tafl played on a cross shaped board. The first probable reference to an ancestor of the game is that of Hala-Tafl, the Fox Game which is mentioned in the Icelandic saga 'Grettis' which is believed to have been written after AD 1300 by a priest living in the North of the country. The next probable reference is in the accounts of the Royal Household of Edward IV of England (AD 1461-1483) for the purchase of two foxes and twenty-six hounds of silver over-gilt for two sets of Marelles. Finally, it has been suggested that a game called Freystafl which is mentioned in the later Iceland sagas might be one and the same as Fox and Geese. 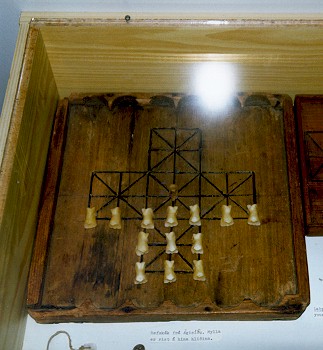 The picture shows a 19th century Icelandic Fox and Sheep board in the Skogar Folk Museum, Southern Iceland. The sheep are made of sheep bone. Not sure what the fox is made of - could it be fox bone?

To the right is an attractive modern rendition of the game from the author's collection. 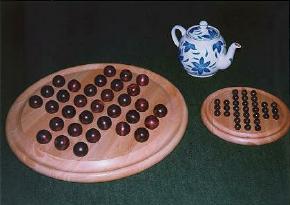 The popular modern game of Solitaire is played on a Fox and Geese board. The game was supposedly invented by a French count who was incarcarated in prison (there are references in French sources back to 1697) and is really a puzzle more than a game. Solitaire was brought to England in the eighteenth century.

You start with all the pegs (or balls) in the holes except the middle hole. Then each turn you hop one peg over another orthogonally but not diagonally. The piece hopped over is taken and removed from the board. The objective is to be left with a single peg in the middle. 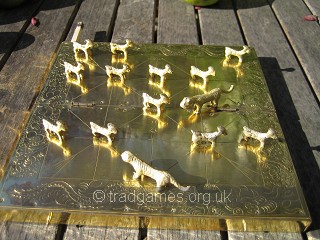 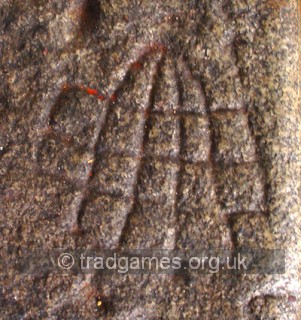 Similar games are also found in Southern Asia but it is thought that these are not of the Tafl group being descended from a separate source. Two examples are Cows and Leopards from Ceylon (Sri Lanka) and Tigers and Goats, the National Game of Nepal.

To the left - the classic Tigers and Goats board - both the pieces and the outer plating of the board in brass.

Tigers and Goats is played on a 5 x 5 square grid with 20 goats attempting to fight off 4 tigers by hemming them in. It's very popular in Nepal and is often played on traditional, distinctive game boxes made from brass.

India has a similar game called 'Adu Huli' or 'Goats and Tigers' which is played on an unusual pyramid-shaped board board. In this version there are 3 tigers and 16 goats.

Shown to the right is an Adu huli board that is carved into a parapet of the Chamundeshwari Temple on Chamundi Betta hill in Mysuru (by kind permission of Raghu - click on the picture for his games blog).

Masters Traditional Games sells a couple of wooden Fox and Geese games. It also sells the Tablut game pictured at the top of this page and a brass version of the Nepalese game of Bagha Chal (Tigers and Goats).

Masters Traditional Games also has Fox and Geese rules and also the rules for Bagha Chal (Tigers and Goats), the National Game of Nepal.

King's Table: Game of the Noble Scandinavians A well written and colourfully illustrated guide to the Tafl family

You can play Tablut on-line. Or else you can buy and download a version to play on your PC.