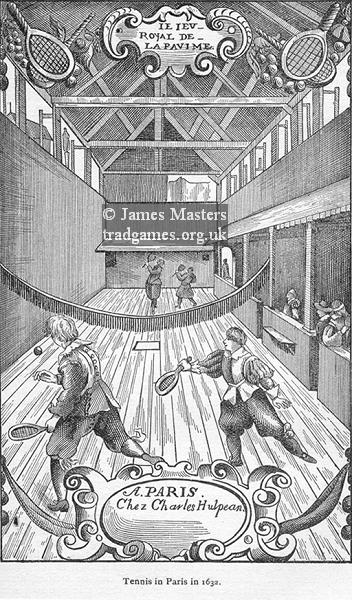 The origin of Tennis, like so many Sports and Games is something of a mystery with various theories having been espoused. One version would have us believe that Stone Age man once hit rocks backwards and forwards with clubs, perhaps. A more substantial beginning is that Tennis derived from Handball, a version of which was played in the ancient world including the civilisations of Rome, Greece and Egypt. There is an Egyptian town on the Nile called Tinnis (in Arabic) and some speculate that this is the origin of the name 'Tennis'. Another string to this theory's bow is that the term 'racquet' is thought to derive from the Arabic word 'rahat' which means 'the palm of the hand'. 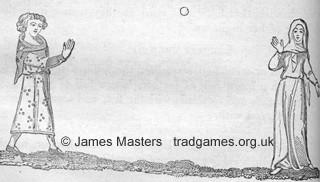 The picture to the left is of a lady and gentleman playing at Handball from a 14th century engraving.

The first game which was definitely like Tennis was played in France and the alternative philological theory is that 'Tennis' comes from the French 'Tenez' ('Take it' or 'Play'). Legend has it that the game was given to the French Royal Court in the 10th century by a wandering minstrel but, regardless, by the 11th century early Tennis was being played in French monasteries for sure. The monks usually stretched a rope across the cloistered central quadrangles in the monastery or sometimes played immediately adjacent to a castle and the court of the game of Royal Tennis is clearly synonymous with these beginnings. Hands were used to hit the ball to begin with (jeu de paume); gloves were used later on and eventually players started to use short bats. Louis IV and the Church both attempted to ban the game in France over the following years but this was clearly to no avail - there were supposedly around 1800 courts in France during the 13th century.

By the 14th century, Tennis had found its way to England where both Henry VII and Henry VIII became keen players and instigated the building of courts up and down the country. Supposedly, Henry VIII himself invented the 'service' - his servants used to throw the ball up in the air for him because he was too fat to do it himself. 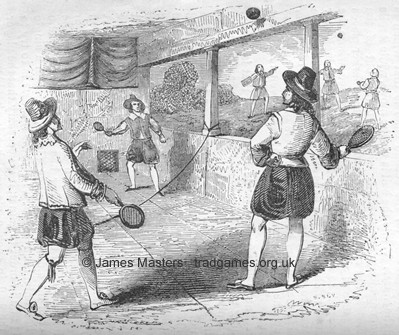 The mysterious scoring system also extends back at least as far as this point in history since it is mentioned in a poem about the Battle of Agincout written in 1415. Originally it seems that the scoring was in fifteens going 15, 30, 45 but over time, instead of saying "forty-five", people started to say forty" for short and eventually this stuck.

But why 15s? Well no-one really knows. Some have said that it is based around the clock face, the target score of 60 being a complete revolution of the minute hand. This is possible but rather circumstantial and this author hasn't come across any evidence to support it.

A more plausible hypothesis points to a French origin since in the early middle ages, 60 was a very key number in France in the same way that 100 is today. That's why the words for seventy, eighty and ninety in French are based on sixty e.g. seventy is "soixante-dix" or "sixty and ten" so it makes sense that a game might be to sixty points. But then, why divide by four? The most likely theory is to do with betting since most sports including tennis were played for money in the middle ages. There were laws in nearby Germany in the 14th and late 13th centuries that forbade stakes greater than sixty "deniers", which supports the theory. And it so happens that at about the same time there was a coin in circulation called a "gros denier tournois" which was worth 15 deniers. So maybe the French tennis playing public were playing for one "gros denier tournois" per point up to the maximum stake of sixty deniers for a game.

The picture to the left is from a book called Orbis Sensualism Pictus by Commenius, 1638.

And what of the sources of the words "love" and "deuce". The latter is derived from the French "a deux du jeu" - two points away from game, or de unx , the English having shortened it first to "a deus" ("deus" being deux in old French) and thence thoroughly incorrectly to "deuce". The similar proposal, that "love" comes from the French for egg - "l'oeuf", is doubtful, despite the assumed linkage with the cricketing phrase "out for a duck's egg (duck for short)". The most likely explanation is that it comes from the Dutch/Flemish "lof" which means honour. Around the time that the expression came to be used, England received a wealth of immigrants from the low countries due to the trauma caused there from incoming Protestantism. Bearing in mind that most games were played for money, if a player scored no points, the phrase "omme lof spelen" would have been applicable - he "played for the honour"...

The Decline of Tennis 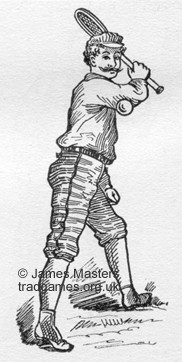 The Tennis racket by 1500 was no longer completely made of wood but consisted of a wooden handle with a sheep gut strung head. The Royal enthusiasm for the game continued both in France during the sixteenth century where there were more than 1000 courts in Paris alone at that time and in England during the Tudor seventeenth century. For unknown reasons, the game's popularity waned in France and England during the 17th century and in France it was virtually non-existent by 1800. In England, the game continued but perhaps more as a fashionable pastime for the rich. Notable English royal players include George IV (1763-1830), Prince Albert (1819-1861) who owned a locker in the changing room at Hampton Court Palace which still bears his name, Edward VII (1842-1910) and George V (1866-1936). 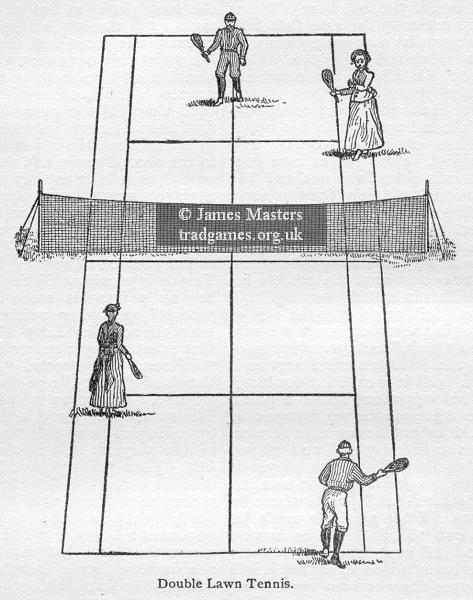 However, the middle of the 19th century saw a turnaround. in 1858, Major T.H. Gem and J.B. Perara invented an outdoor version of Tennis adapted for play on grass and in 1873, Major Walter Wingfield came up with a new version of Tennis using modified rules which he patented under the name "Sphairistike". He was probably the first person to write down a set of rules for lawn tennis - one of which stated that only the server could score a point. The main difference from Real Tennis was that the court didn't have side or end walls. But as a marked difference to the modern game, the shape of the court was an "hourglass", the length being 20 yards but the width being 30 yards at the end and only 21 yards at the net. Then in 1877 the All-England Croquet Club at Wimbledon decided to hold the first Wimbledon lawn tennis championships. For this tournament, three members of the club drew up a new version of the rules, the composition of which marked the first accepted standard set of rules. These rules abandoned the hourglass court shape standardising it at 78 x 27 feet and have remained unchanged in any significant fashion with the exception of the tie break introduced in 70s (except for the Davis Cup - 1989).

Pictures of the 2 chaps and the picture to the left are from an American encyclopedia dated 1890. Already Lawn Tennis is described as "more common" than Real Tennis.

In 1874, a US traveller brought the game to the Americas and the US Lawn Tennis Association was formed in 1881. International competition soon followed, with the International Lawn Tennis Challenge Trophy (later the Davis Cup) first contested in 1900 and the Wightman Cup, for competition between British and American women's teams, in 1923. Men's singles and doubles play was included on the program for the first modern Olympic Games in 1896.

The old game of Tennis (still called Jeu de Paume or 'hand ball' in France) in the meantime suffered a large eclipse as a result of the new found dominance of the Lawn version. The number of courts steadily diminished during the 20th century but at the turn of the century they are increasing again. I was informed that in 2001, the number of courts in use are 26 in Great Britain, 8 in the USA, 3 in France and 6 in Australia and the number of players is a few thousand around the world. Tennis is now called called Real Tennis or Royal Tennis in Britain to distinguish it from Lawn Tennis and in the USA it is known as Court Tennis. No two Royal Tennis courts are exactly alike. There are minor differences in the width or angle of the penthouse roof above the corridor and in the width of the tambour as well as the dimensions of the court. For instance, the court at Hampton Court is slightly wider than most.