Wei Qi (also spelt Wei-Ch'i) as it's known in China, Baduk (Paduk or Pa-dok) as it's known in Korea or Go, as it is known in Japan and generally in the West, is considered by most Oriental game experts to be the worlds greatest strategic skill game, far surpassing Chess in it's complexity and scope. Most people who have played it would agree with this conclusion. Wei-Ch'i means "surrounding game" or "surrounding chess" and the object is simply to capture territory by placing down counters on the board.

Wei Qi is the most perfect of board games from several perspectives. Of all the serious board games described on this site, Go has the fewest rules and yet, the game itself is is the most intellectually challenging. The mathematical elegance of the rules is complemented by the great beauty of the boards and stones - of all board games in the world, Go has been raised by the Japanese to a pinnacle of aesthetic beauty. The Japanese have schools where people devote their entire life to the game and a there is a grading system akin to the martial arts systems.

According to Chinese history, Wei-Ch'i was invented by Emperor Shun (2255 - 2206 BC) to help develop the intelligence of his son, Shokin. A alternative version attributes the invention to U, who lived during the reign of Emperor Kieh Kwei several hundred years later. Under non-Chinese history, it is thought more likely that the game originated in central Asia from where it spread eastwards through Nepal and Tibet to China. The earliest written reference is found in the works of Mencius around 400BC. The first books were written about Wei Ch'i during the T'ang dynasty between 618 - 906 AD and there are enough poems and other literature written during the 10th Century AD to deduce that the game must have been well established by then. 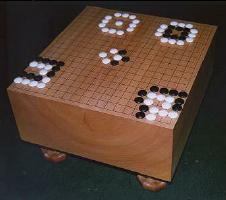 Shown on the left is a Katsura Go-ban from the author's collection. Central is a classic example of Ko. Any group of stones with two 'eyes' is permanently safe from attack and bottom right is shown such a group - it is impossible for black to capture the white group. Bottom left shows an example of 'Seki' where neither player dare play in the central space. At the top right is black group demonstrating why a group with a single eye is vulnerable. If white plays in the centre of the black group, the black stones are taken and the pattern that results is shown top left.

In 754 AD, the Chinese Emperor Hinan Tsung gave a Wei-Ch'i game to Kididaijin, a representative of the Japanese Emperor Koken Tenno. It had already reached Korea by that time where it was called Pa-tok (or Badok). The Japanese called the game 'Igo', (phonetically - 'Go'). As in China, at first is was played by the aristocracy only but it gradually filtered down to the educated lower classes over time. In the 17th Century a ranking system was introduced and the feudal government issued a sponsorship to help with studies of Go in special schools. Run by Buddhist priests, the four major Go schools were Honinbo, Hayashi, Inoue and Yasui. Top players from these schools competed in competitions, sometimes in the presence of the Shogun at his castle. A leading player in the 17th century was Honinbo Dosaku, the inventor of the pincer play concept, another was Shusaku (1829 - 1862) who invented an opening pattern still used today. After the fall of the Tokugawa Shogunate and the restoration of the Emperor in 1868, the sponsorships dried up and Go's popularity waned. However, by the beginning of the 20th Century there was a resurgence and people from all classes were playing the game.

In 1924, the first Go organisation, the Nihon Kiin, was created in Japan under the influence of Baron Okura and managed to recruit the last of the great Honinbos, Shusai. His great rival, Karigane, joined another new smaller group called Kiseisha and there was fierce competition between the two clans which culminated in the famous match Shusai v. Karigane. Victory by Shusai assured the victory of Nihon Kiin which went onto dominate the scene. In 1938, Honinbo Shusai retired and directed the Nihon Kiin to stage a tournament of all the leading players to decide who would take his title. Of the other important tournaments which are currently played, the two most major ones are the Meijin tournament which is sponsored by the Asahi Shimbun newspaper and the Kisei tournament.

The Go board can either be a flat table board or the more traditional floor-board with legs (Go-ban). The most traditional and expensive wood for a board is Kaya, a softwood of the Yew family. Kaya boards can cost a fortune; the very best Kaya come from trees in Miyazaki, Japan that are more than 700 years old. Other cheaper woods are Hiba which looks very similar to Kaya, Agathis, a yellow durable Indonesian wood or the softer Sinkkaya Alaskan Spruce. The most popular wood is Katsura which lacks the colour and brightness of Kaya but is hard and long-lasting. The quality of the grain of the board and how the grain is oriented is also of prime importance. Most common are Itame boards in which the grain is bent or irregular. Better boards are Masame which means the grain runs straight across the top of the board. Best of all are Tenmasa Masame boards that have grain running from bottom to top as well as straight across the top. 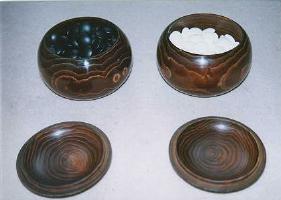 The picture on the right shows the author's 9.2mm jitusyo slate and clamshell stones in cherry wood bowls.

The best Go stones are made of slate and clamshell and the quality and the grain on the clamshell matters. There are two grades of stone based on the white pieces, Yuki - snow white and jitusyo - ordinary. The thickness of the stones varies according to personal taste but they are usually between 9mm and 10mm. There is a knack to playing a stone - it should be held between the index and middle fingers and placed with an audible click. The Go bowls which hold the stones should also be of good quality wood with straight grain.

Go was the last serious game to be mastered by a computer program. Gary Kasparov, the best Chess player in the world (probably ever) succumbed to Deep Blue 2 in 1997 but many people believed that no-one would ever be able to write a program that could defeat a reasonable Go player. Deep Blue was written using a brute force algorithm - a very powerful computer designed to compute every possible combination into the future and to use the results to pick the best option. But the exponential number of future possibilities in Go makes this strategy unviable. So Google developed a program based on AI that was able to learn how to play by analysing millions of matches using neural network algorithms and a distributed network to obtain sufficient computing power. It was called AlphaGo.

In October 2015, AlphaGo defeated the European Go champion Fan Hui, a professional 2nd Dan Go player, 5 - 0. Like a boxer earning the right to fight the World Champion, this heralded a climactic match against the world champion himself which was scheduled for March 2016. Lee Sedol, 9th Dan, ranked amongst the top four players in the world was subsequently defeated 4 games to 1 in an electrifying match which may go down in history as some kind of tipping point for AI. But something else happened in the match that went beyond that accomplishment - AlphaGo continually surprised and astonished the crowd by playing moves that were both unexpected and creative. The best example came during the 2nd game when Alpha Go played turn 37, a stone into a large swathe of territory that was already understood to belong to Lee Seedol. No good human player would have considered playing in this region; and Lee Seedol was visibly perplexed and took a long time to play his next move. As the next few turns passed, it became apparent that this move was a work of genius, a move of such unexpected beauty and cleverness, that it broke new ground and would go down in the annals of history as something to learn from. It had become apparent that AlphaGo was able to come up with something new and inventive that was beyond or equal to human creativity and humans were now learning from the programs they had created...

An iceberg tip of links to start you off - surf onward.

If the sites above don't have rules sufficient for your purpose, simple rules can be obtained for free from Masters Traditional Games.