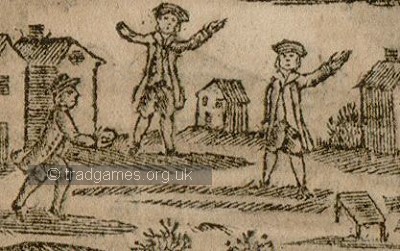 Stoolball is usually quoted as being the ancestor of Cricket, Bat and Trap and sometimes Rounders, too. For more information on this probable ancestor of all such bat and ball field games, see the Stoolball page.

Modern Stoolball is indeed similar to Cricket but Cricket is a very old game too and ancient Stoolball was quite a different game. So it is difficult to be sure.

However, Cricket seems to have appeared in the sixteenth century whereas the earliest reference to Stoolball predates Cricket's by more than 100 years and it isn't unreasonable to imagine that a game played with stools and the hand developed into a game played with wickets and a bat.

In 2011, Barry Stones wrote trying to find information on a game he played as child in Yorkshire. Called simply 'Sticks', 3 sticks of about 4-5 inches were arranged like cricket wickets and bails leaning against a wall. There were 2 teams, one attacking and the other fielding. You would throw a ball at the sticks, if the ball hit the ground, then the wall and was caught by a fielder you were "out". If it hit the wall, then the ground you were safe, but it didn't count for anything. From what he recalls, if you hit the sticks and they fell down you would run away and the fielders had to try to hit members of the attacking team with the ball whilst the attackers tried to reconstruct the sticks.

Could this be another member of the cricket family? 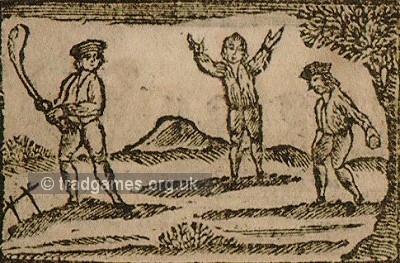 The earliest documentary mention of Cricket is from a 1598 manuscript in Guildford Borough Records. "John Denwick of Guldeford ... being of the age of fyfty and nyne yeares or there aboute saith upon his oath that hee hath known the parcell of land for the space of Fyfty years ... hee and several of his fellowes did runne and play there at Creckett and other plaies.", implying that he had been playing the game of Cricket since around 1550.

The illustration to the left is from around 1744 and has an accompanying inscription: "This lesson observe, When you play at Cricket, Catch All fairly out, Or bowl down the Wicket." The equipment used in this game is both interesting and instructive. The bat is more akin to a hockey stick and was in those days known as a bandy - an instrument used for several games including the forerunner of modern hockey. The wicket is just 2 small forked sticks with another stick or twig taking the part of what would these days be the bails. This serves to remind us that games and sport in those day were just like children's games - unregulated, played with whatever equipment happened to be around and no doubt subject to numerous regional variations not-to-mention the odd spontaneous rule change. 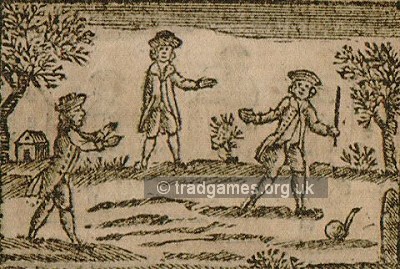 The game of Bat and Trap is something of a Kent tradition and isn't really known outside of this English county. Some have suggested that it is the ancestor of cricket. Although the games are obviously related and Bat and Trap does seem these days to be a more primitive game than cricket, the assumed split came many centuries ago and is lost in time.

From the same book as the Cricket extract above (c1744), there is this page entitled "Trap-ball". The accompanying text says "Touch lightly the Trap, And strike low the Ball; Let none catch you out, And you'll beat them all.

There was a monastery on the site where Ye Old Beverlie Inn, Canterbury now stands, and it is believed that the ancestor of Bat & Trap, which is clearly related to Cricket, was first played in the 14th century. The Beverlie opened for business in the 1740's, and it has records of the game being played there since it opened. The game had dwindled almost to non-existence at the beginning of the twentieth century, being played by just a handful of pubs but in 1922, it was rekindled when a group of pubs, Ye Old Beverlie amongst them, 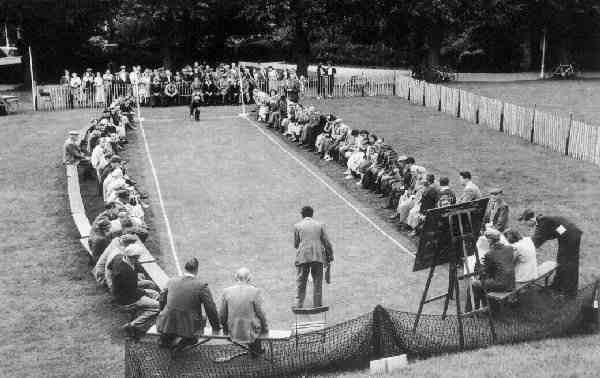 created the Canterbury and District Bat and Trap League. From that point, the game and the league gathered strength until in 1986 when a political split caused the creation of the splinter group who called themselves the "Friendly League". At the time entry into the Canterbury and District league could only occur when a team departure created a vacancy and the management was deemed to be somewhat autocratic by it's opponents.

The Friendly League today is a smaller, slightly more social affair than it's parent, in which the competition is not taken quite so seriously. At the turn of the twentieth century, the game is again in slight decline as a result of the encroachment of TV, theme pubs and other modern distractions but both leagues continue to thrive. Update: June 2006, the chairman of the Friendly League has informed me that he has been in contact with the Canterbury League and they are considering some kind of inter-league match in the near future.

The picture shows the "Canterbury British Legion" v. "Post Office Telephones" match from the 1954 Festival cup which was played beside the Dane John monument in central Canterbury. By kind permission of Howard Hammond-Edgar, Secretary of the Canterbury and District League. Below right is a picture from the Bat and Trap open tournament held at the Bull's Head, Pratt's Bottom, Kent, August 2008. 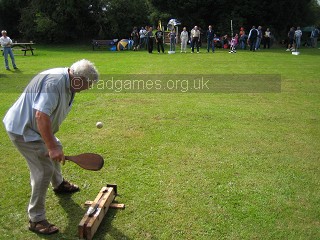 Bat and Trap is a team game with eight players on each side. The "trap" is a rectangular mechanical device that lies on the ground. The batsmen knocks a lever in the trap that shoots a hard rubber ball upwards in front of the batsmen who then smashes it with the bat towards the other side of the pitch. The objective is to make the ball pass between two white posts which are 21 yards away. Normally, the ball bounces once or twice before doing this and is fielded by a member of the opposing side who stand in a line just behind and between the posts. However, in the rare case where a fielder catches the ball without it having touched the ground, the batsman is "caught out". A batsman who misses the ball or otherwise fails to bash it between the posts successfully is also out, this tragedy being termed "knocked out".

Once the a fielder has the ball in hand, the bowling part of the game proceeds. The bowler has as a target the front part of the trap, which is a 5 inches square rectangular flap hinged at the bottom and standing vertically. A bowler from the fielding side throws or rolls the ball down the pitch at the trap target which is called a "wicket" and the batsman must stand back and cannot obstruct the ball in any way. If the wicket is knocked down, the batsman is "bowled out" and the next batsman steps up. If the bowler misses, then the batsman has scored a run and carries on with the next strike.

Where to Buy Bat and Trap