The Game of the Goose

There are few board games that are truly seminal and most of the really old ones are lost in antiquity. In modern times, a list of such games could include Scrabble, The Landlord's game (from whence Monopoly), Dungeons and Dragons or Pandemic. All of these games and just about every other modern board game you can think of owe something to the grand-daddy of all modern commercial board games, The Game of the Goose. This game was the first board game to be published commercially, the first game to take advantage of printing technology for publishing in volume and the first to demonstrate the rich benefit of a design that both played well and looked great...

Note: Much of the interest in the Game of Goose is derived from looking at the detail of the many illustrations on each board. Accordingly, each picture on this page can be clicked on to view a version that can be zoomed and enjoyed in greater depth ... thanks to Adrian Seville for the high-resolution pictures.

One of the interesting things about 'Goose' is its indefatigable standard form - 63 squares in a spiral, 13 of which are geese with an additional 6 illustrated hazard spaces smattered along the route. Over the years, all sorts of variants to the basic form have appeared - the majority of Goose games don't feature geese at all, according to the publisher's whim or purpose, while some boards aren't spiral and at first glance appear to be unrelated. But this standard format has astonishing staying power and somehow many boards produced today have exactly the same layout as those made 500 years ago! 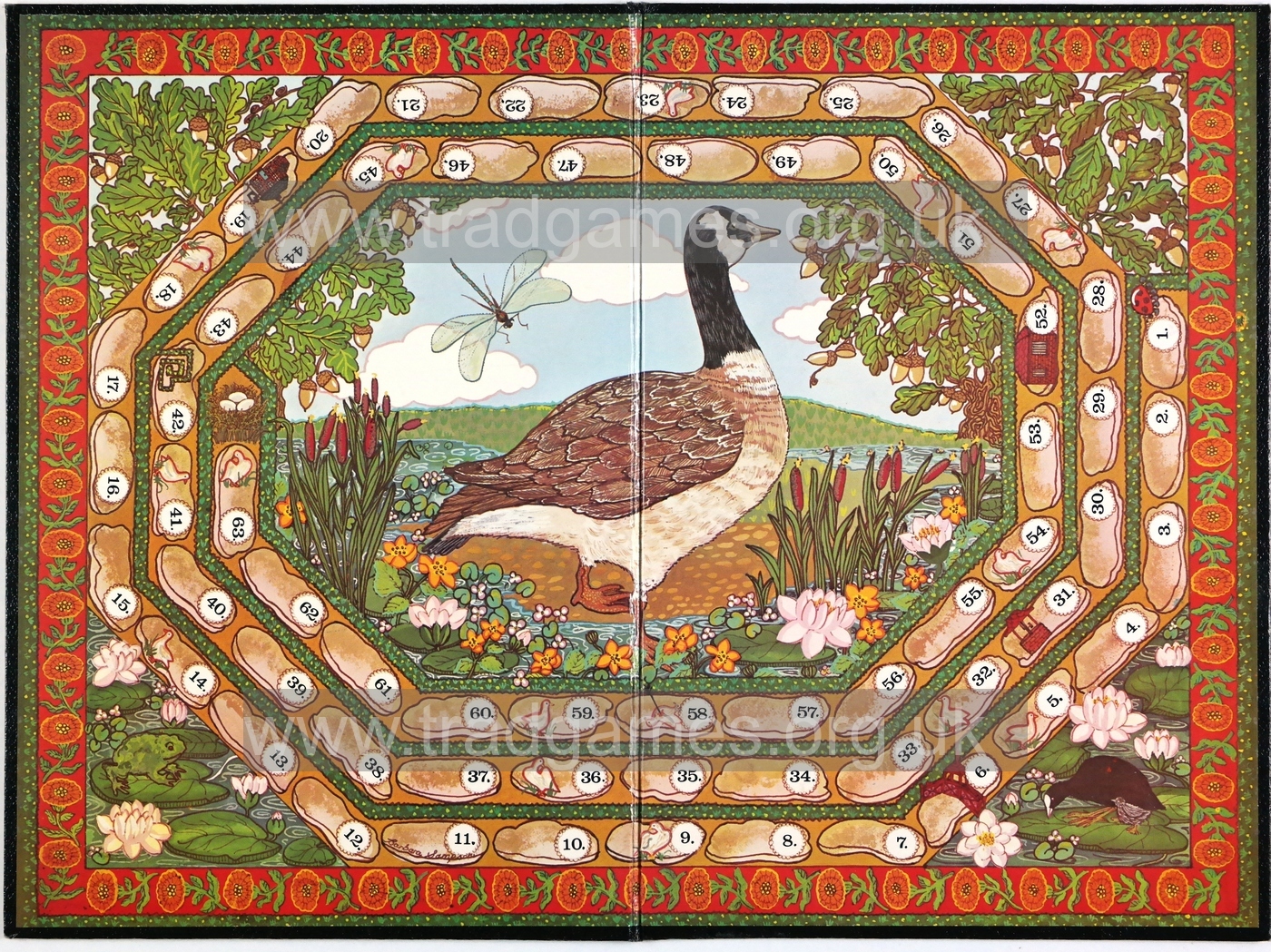 In the 1960s, British company Galt published this game called, The Royal Game of Goose. All the standard spaces are there - the Inn, the Well, the Maze. The Death space is often one in which the artist creative juices flowed. In this instance, it shows a deceased Goose that has apparently been skewered by an arrow.

Game of the Goose History

The Game of the Goose is a simple race game similar in nature to Snakes and Ladders (the Game of Wisdom). The earliest evidence of it, as with many popular games in medieval times, is in the form of a royal statute banning it and advice not to play it - in this case from Italy during the 15th century. Indeed Italy appears to be where the Game of Goose or 'gioco dell'oca' originated. 'Goose' like almost all games prior to the 19th century was originally played for money - bringing with it the usual associated problems of disastrous debt and notorious cheating. Indeed towards the end of the sixteenth century, Gonzalillo, the court jester of King Phillip II of Spain, wrote "...God grant that he who made it may burn for, to the Prince and the Infanta and Luis Tristan, I have lost 40 Scudi". 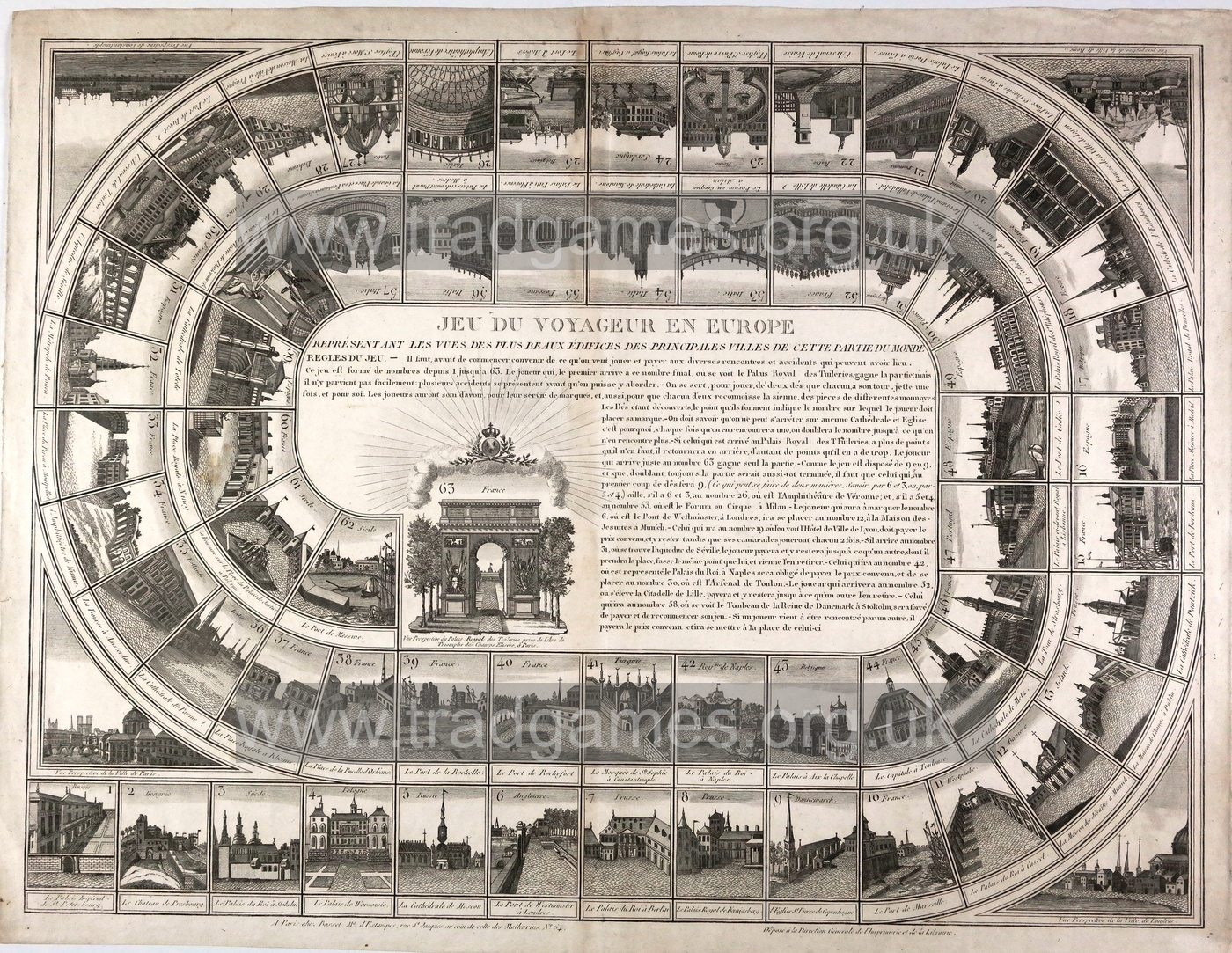 This example called "Game of the Traveller in Europe" was published in France, 1830 and like many Goose games is more about the artistry than the game itself. Take a look at the amazingly detailed images of locations around Europe in each space. Goose squares are represented by famous cathedrals and churches, the Bridge is Westminster Bridge in London, Death shows the tomb of the Queen of Denmark, the Well is the aqueduct in Seville and the Prison is the Vauban fortress in Lille.

The birth and growth of this, the earliest printed board game, coincided intimately with the inception and improvement of printing technology. During the 17th and 18th centuries, the popularity of the game spread across Europe to the point that the Game of the Goose was a virtually a household name from the Balkans to Scotland by 1800. Additionally, it became apparent fairly early on that: 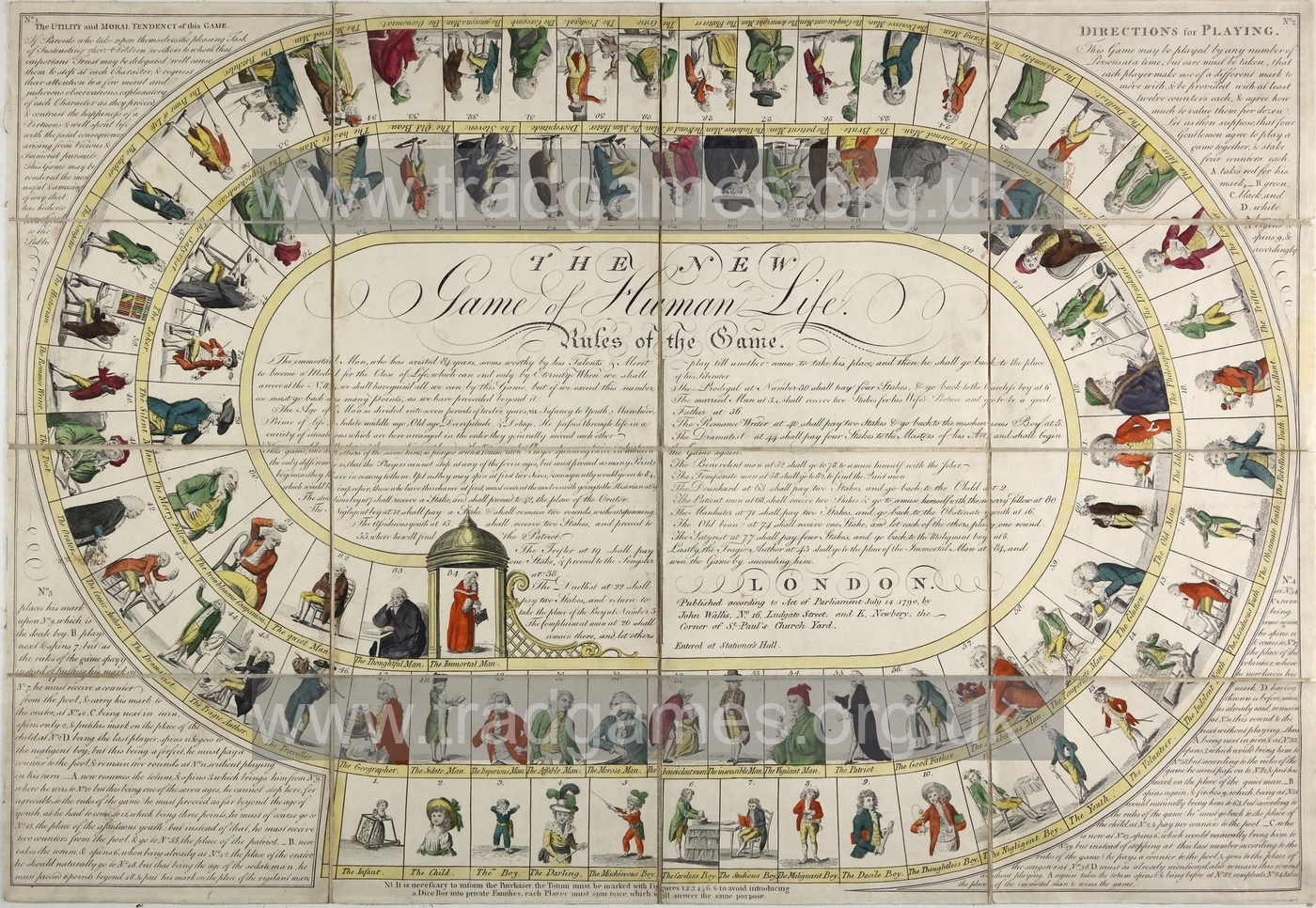 The Game of Human Life published by Newbery and Wallis, 1790. In this delightfully illustrated invention, the 84 spaces represent the seven ages of man and the theme is morality. Can you spot Sir Isaac Newton, George the Prince Regent and Captain Cook?`

Advances in printing bestowed a renaissance in illustrative power that was brought to bear on the Game of Goose in all its forms and this became its signature appeal - the form, nature and artwork on some of the boards is exquisite, both in artistry and detail. With usually 63 squares to illustrate a myriad of topics was applied to the basic form. Versions appeared that were educational, political, satirical, moralistic and religious with illustrations based on warfare, travel, sports, all manner of animals, advertisements, promotions to name just a few. And occasionally a Goose-based game was published that was just for fun! 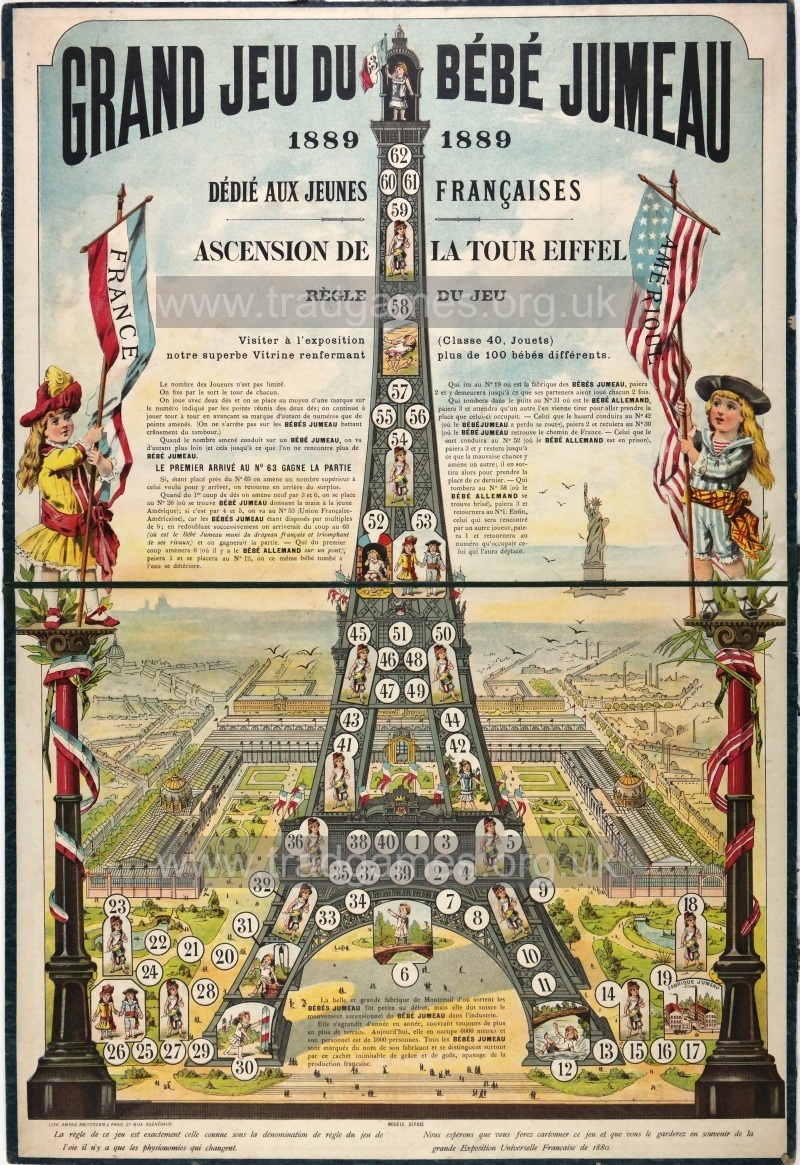 It doesn't look like a Goose game but it is! Check the illustrations on each numbered space. In fact this game is promotional material for the French doll-making firm Jumeau, published in Paris, 1889. At the time, their enemy came in the form of cheap, low-quality imported dolls from Germany and so this game aimed to set the record straight. The Goose squares all show pristine, happy Jumeau dolls dressed in their high-quality clothing. While the Prison and the Well squares show cheap German dolls trapped and unhappy and the Death space shows one of the imported dolls broken in half...

Over the subsequent century, the gambling aspect dwindled and the game metamorphosed into a game primarily for children and so it remains today. During the 19th century, as printing costs fell, a wealth of new versions, variants and derivatives appeared often with artwork that was stunning, thoughtful, humorous or innovative. Although it is no longer a familiar sight in Britain or America, the Game of the Goose is still in production on the continent of Europe and remains popular, especially in the Netherlands.

Game of the Goose Rules

The game is the essence of simplicity. Players take turns to roll the dice and moved their piece forward by the sum of the two dice. If a piece lands on an enemy piece, the enemy piece is returned to the space that the original piece started from (i.e. the two pieces swap places). If a piece lands on a space with a picture of a goose, it moves forward by same amount again. If this causes the piece to land on another goose, it moves forward again in the same way. Additionally, there are a number of Hazard spaces that are usually illustrated to match their name, each of which has a special rule.

As a goose appears every 9 squares, there is a special rule to avoid someone throwing 9 on their first throw, repeating until reaching 63 and winning the game. If the first throw is six and three, the piece moves to space 26 or if it's five and four, move to space 53. Spaces 26 and 53 are often illustrated with dice.

To win the game, a piece must land exactly on space 63 - if a player throws too many, the piece counts the extra points backwards from the winning space. 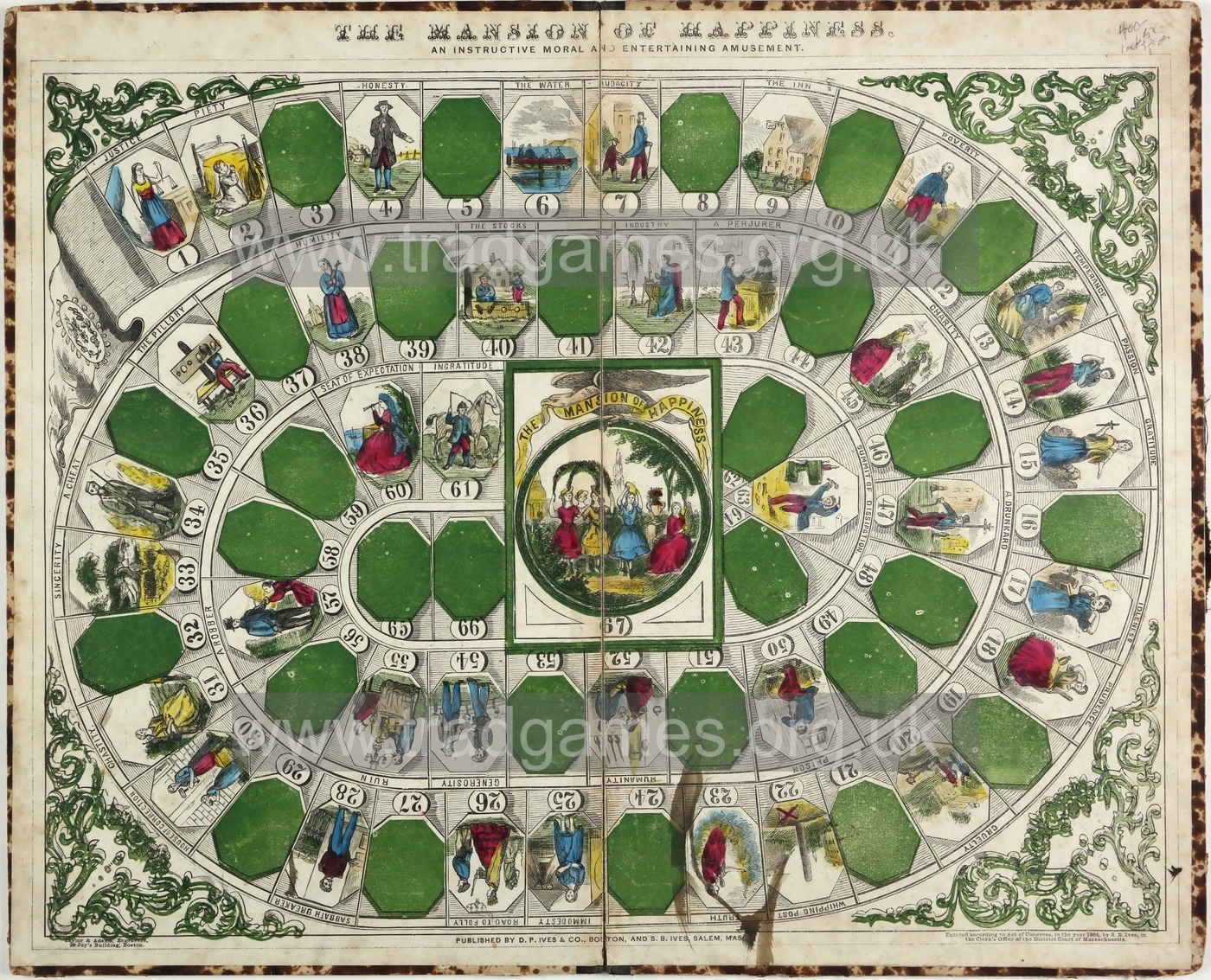 The Mansion of Happiness became a craze in the USA although it was originally published in Britain. A morality based game, spaces representing traits such as Piety, Honesty and Gratitude are offset by penalty spaces such as Immodesty, Cruelty or Audacity.

The standard template is given by the Geese with hazard squares on the following spaces:

In truth there are some regional variants. For instance the Maze in most French games returns the piece to space 30 rather than 39 while most English games do not have a goose on space 9 and therefore dispense with the special rule for a first throw of 9. 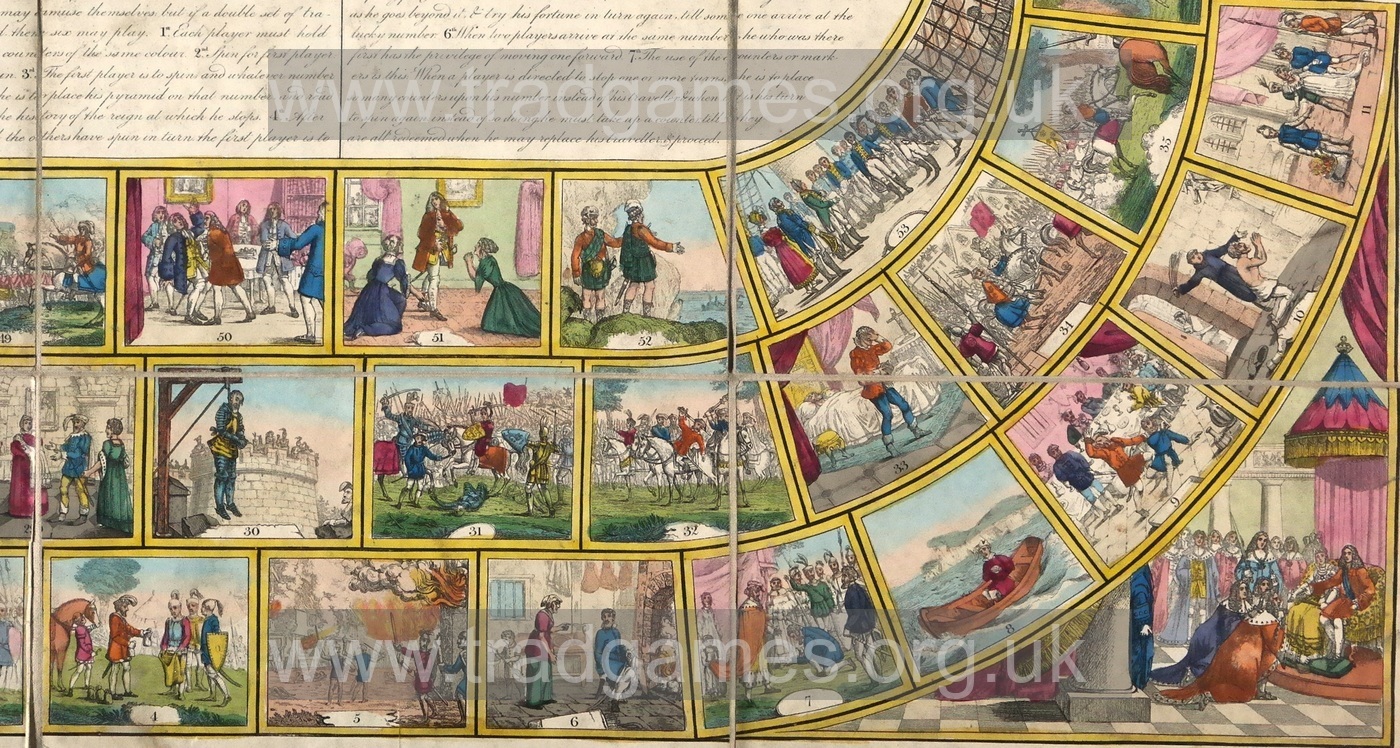 "British Sovereigns - from Egbert to George III" was another beautifully illustrated game. It was published around 1820 by J & E Wallis.

Why 63 spaces? According to leading expert, Adrian Seville, it is probably associated with the 'Grand Climacteric', the critical year at age 63 years. The Grand Climacteric has been thought to bring major changes in the fortune and health of an individual since the era of the ancient Greeks. 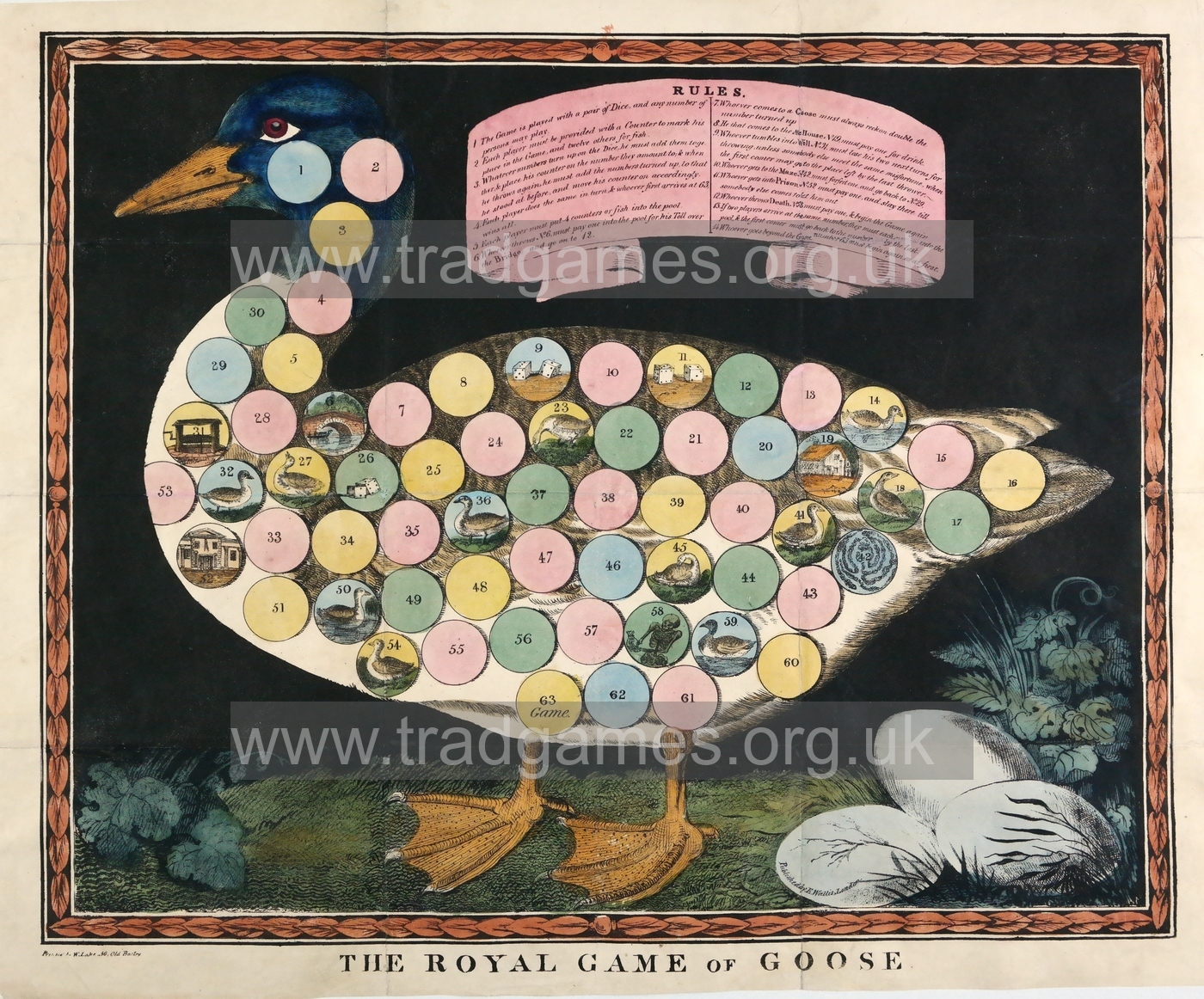 Shortly after 1800, some bright spark came up with the idea of a Game of Goose in the shape of a Goose! A variety of copycat publications followed over the next few decades. Most were British and called 'The Royal Game of Goose'.

Why Geese? The game appears to have appeared first in Italy and in Italian culture, Geese are lucky. This corresponds to the Goose spaces granting a bonus on the track. 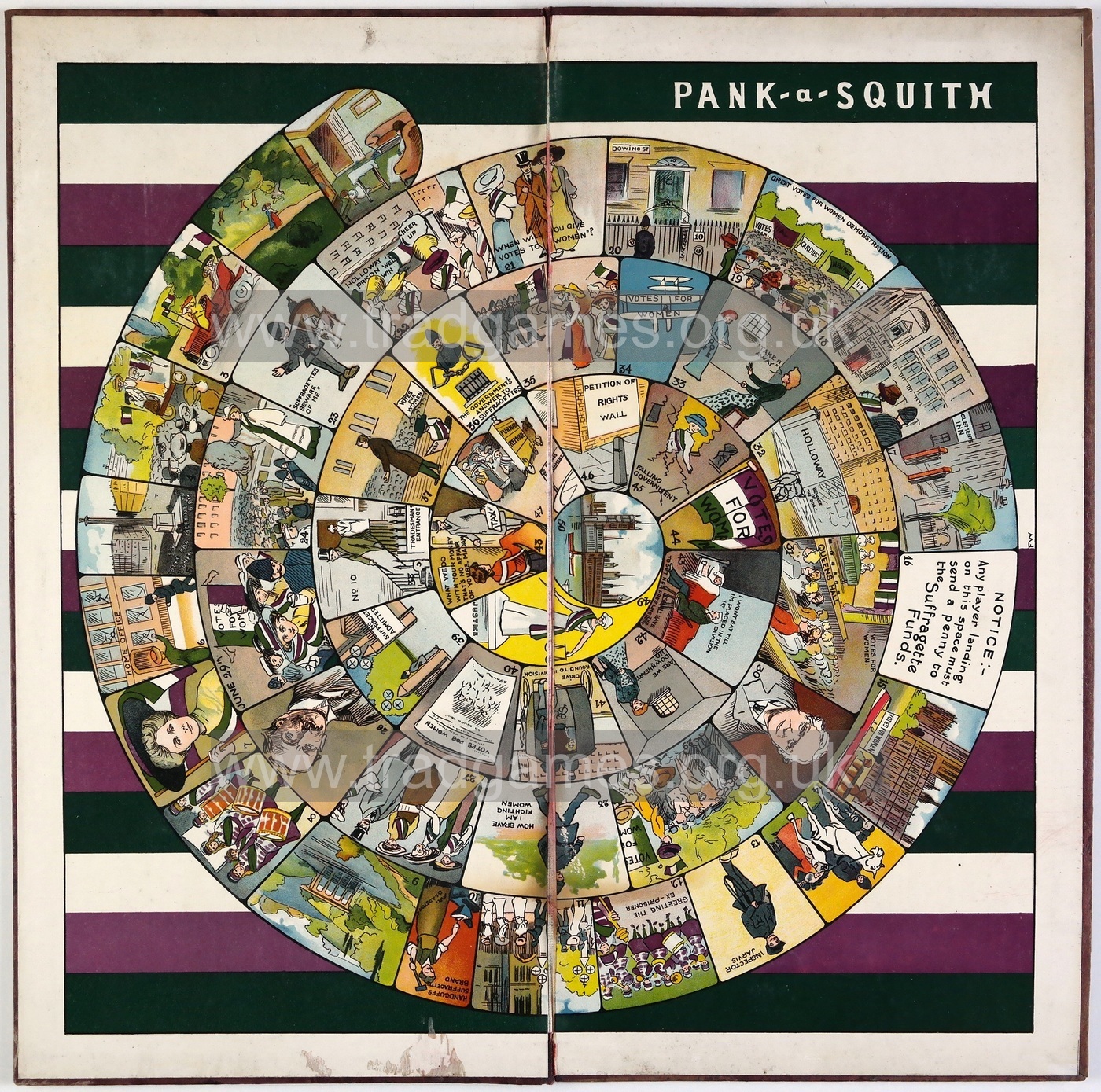 Published around 1909 at the height of the Suffragette movement, 'Pank-a-Squith is a classic example of a Goose derivative designed to push a political message or to satirise opposition. The board has lost much of the standard Goose form but if you look closely, at least the Bridge, an Inn and a Prison are still there.

Why are so many of the games called 'The Royal' Game of Goose? Indeed some people refer to the game generically always as the 'Royal Game of Goose'. The most likely theory according to Prof. Seville is that the game was popular with royalty at the earliest times of its existence - with French royalty and the game was also presented to Phillip II of Spain just before 1600. Early Italian, German and Spanish prints do not use the Royal prefix but the name obviously stuck in certain regions.

This page can be viewed as an introduction to the collection and writings of Adrian Seville, a leading authority on the artistry and social history behind the Game of the Goose. Unless otherwise stated, pictures above are all with permission from the Adrian Seville Collection - with thanks. For more information on the Game of the Goose, I recommend his book 'Vintage Board Games'. Dozens of images of Goose and other games like the above are featured together with fascinating information about each one.

Professor Seville has also collaborated with Dr Luigi Ciompi in the creation of the website giochidelloca.it, where you can spend hours boggling at the detailed artistry of more than 2600 Goose and related games.