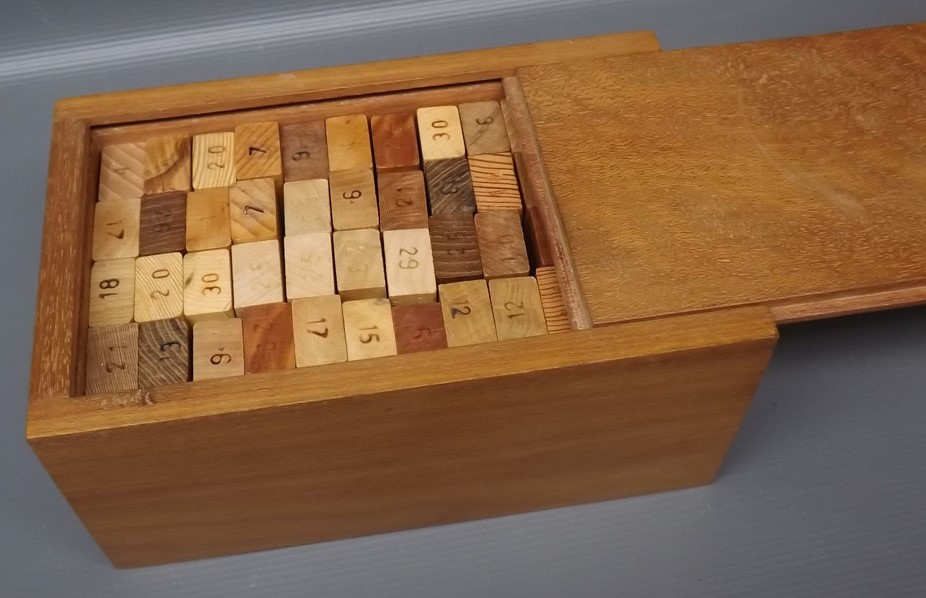 Jenga is a classic game that is based on the earlier game of Takoradi Bricks. Leslie Scott, the inventor of Jenga, was born in 1955 in Dar es Salaam and her family lived in various African countries during her childhoold including Ghana from 1972 - 1976. As early as 1974 the family were playing Takoradi Bricks in Accra, the capital, which involved removing blocks from a pile of bricks until they collapsed. The blocks were bought from a local carpenter in the town of Takoradi, Ghana -hence the name.

There is good evidence beyond Leslie Scott that the game of Takoradi Bricks was disseminated from the Scott family to the expat community in Ghana around 1974 - 1976. For instance, the Parsons family of Maine, USA were shown the game by an African friend who had been in contact with the British community in Ghana in the mid-1970s. In 1978 they published a version of Takoradi Bricks that is still available today.

Picture is of Takoradi Bricks in a box sold by auction in Jan 2017 - by kind permission (Sep 2017) of Keys, Fine Art Auctioneers, Aylsham, Norwich.

I have seen the instructions for a set of Takoradi Bricks from the American Club in Ghana. The stack is built with gaps between the blocks which were on their sides rather than flat. The other main difference from Jenga is that removed blocks were not replaced on top of the stack.

The origin of Takoradi Bricks itself has been open to some speculation. Leslie Scott herself doesn't claim that she personally invented Takoradi Bricks - rather that the game evolved into existence within the confounds of her family home. While there's no argument over the fact that the Scott family disseminated Takoradi Bricks, some have postulated that the game existed prior to their taking it up from 1974. Here are the most common origin theories:

As no-one has come forward with any witness or evidence to support one of the other theories, presently there seems to be no reason to disbelieve Leslie Scott's account.

Regardless, in a letter to the Oxford Times in 1983, she stated that Takoradi Bricks was based on "a stacking game that children often play with dominoes". Such games normally are simply a challenge to see how high a stack of dominoes can be built without toppling over. Sometimes players take turns to see how high they can get by themselves and other times, players might take turns to put a tile on the top of the stack until it toppled. It's easy to see how this could have evolved into a game where bricks were removed instead of added. For instance, if all the bricks were used up and there was no winner, it's a good way to continue the game to find a winner (or loser)...

To the original Takoradi Bricks game, Leslie Scott explains that she added 3 things:

She named the game Jenga meaning 'build' in Kiswahili, registered Jenga as a trademark and ensured that the rules were known to be her copyright. She considered also patenting the game but soon discovered that the cost was prohibitive for one country, let alone worldwide.

The game was first sold in the UK via various minor outlets in 1982 and was launched at London Toy Fair January, 1983.

Loss of Jenga to the corporates

The following information is taken from Leslie Scott's informative book, 'About Jenga'.

Leslie Scott pumped her heart and soul into the game and her belief in its success was absolute. But it was almost good fortune that eventually made it a success. She had sold her house and investments and put it all into Jenga plus had taken out an enormous loan during November 1982 in order to bring it to market. Towards the end of 1983, things had only worsened - sales were much less than expected and when she ran out of money again, further loans were taken out that were secured by a friend and by her mother. Everything points to the fact that Leslie Scott was effectively on the verge of bankruptcy and Jenga was about to disappear into ignominy without a murmur.

Fortuitously, Robert Groble, the Canadian owner of a vegetable oil business and brother of a friend of Leslie Scott rang her in towards the end of 1984. Having played the game, he loved it and offered to become Canadian distributor of the game.

By Spring 1985, she was in such financial debt that had the game suddenly taken off, she would not have been able to afford to make more stock.

Soon after their first agreement, RG formed a partnership, Pokonobe Associates, with 2 older cousins Paul Eveloff and David Grebler to run the Jenga business. He then persuaded Leslie Scott to extend the contract by signing over first North American rights rights (16 April 1985) and then worldwide rights (17 Oct 1985) to Pokonobe Associates. His argument was that the game would only be successful if they could get a large toy firm on board to publish the game and for that they would want worldwide rights. The deal was heavily weighted in their favour and, in her book, it is apparent that Leslie Scott regrets her decision to sign over rights to the game for so little but it's easy to see that in many ways, perhaps she had no choice and this was effectively a last gasp effort for the game.

Un-beknownst to Leslie Scott, Pokonobe was simultaneously negotiating the rights to sub-licence Jenga's publishing rights to a large Canadian toy company called 'Irwin Toy' and an agreement with them was duly signed. Irwin Toy brought big company ideas to the table and did add value - they came up with the idea of branding each brick with the name Jenga and also the firm plastic sleeve that allowed the game to be stacked more easily.

Irwin Toy introduced Jenga at Toronto Games Fair Jan 1986 and came away with orders for around 80,000 units, an unprecedented success. This caught the attention of some even bigger organisations and within a year, Hasbro had managed to aquire the rights to Jenga in the USA (and later the world). Hasbro wasted no time and re-released the game under the Milton Bradley name in 1987.

Accordingly to Leslie Scott, Pokonobe never explained fully to Irwin Toy that she was the inventor and author of Jenga. Meanwhile, to Hasbro executives, Pokonobe wrote Leslie Scott out of the picture completed and gave the impression that it was entirely their game. Decades later, Hasbro have now been forced to acknowledge Leslie Scott as the inventor of the game.

Leslie Scott is to be thanked for her open and frank exposition of this episode - it is a lesson for all game inventors who need to know that good ideas must be protected and one can expect large companies and corporates to be totally ruthless when it comes to exploiting a good idea.

Jenga went on to become the second best selling game in the world and has spawned dozens of variants and similar products created both by Hasbro using the brand Jenga and by innumerable other manufacturers using different names.

OK, I've invented that term, yes. But someone had to, because Takoradi bricks and Jenga are not the only game of this type. The famous stacking game, first published in the early 1980s is one of a small family of games that hasn't been considered much if at all, until now. Here's my definition of a Crescendo game:

Here are some other games in the genre:

A game published by Tomy in Japan, 1975. In this players take turns to push a sword into a plastic barrel. Eventually one of the swords causes a pirate figure to pop-up out of the barrel like a Jack-in-the-box.

Other modern branded games of this type include 'Dinobite' and 'Crocodile Dentist'. 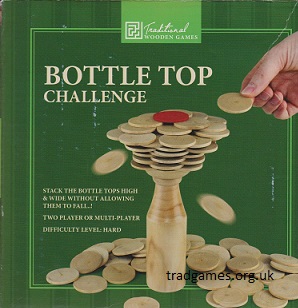 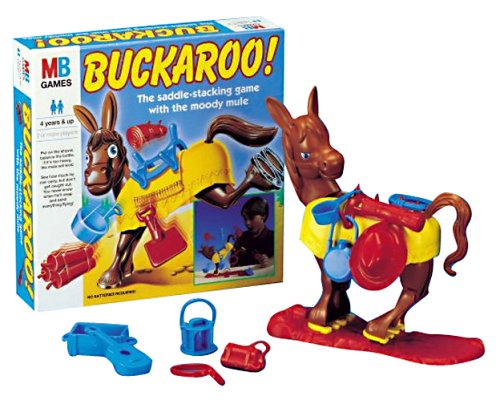 First published in 1970 by Ideal Games and is thus the earliest commercially published game of this type. In Buckaroo, players take turns to put various model tools and equipment onto a plastic donkey until eventually it bucks and everything shoots into the air.

Various manufacturers have produced a game with model chairs that are stacked unevenly, interlocking until eventually they fall down. Other similar games exist with different objects e.g. ladders. 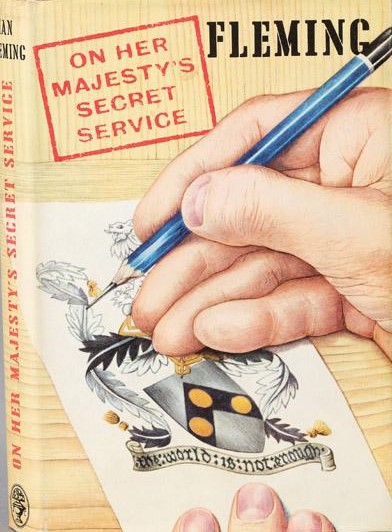 The earliest mention of a game of this type I can think of described in Ian Fleming's book, 'On Her Majesty's Secret Service' published in 1963. James Bond explains the game to a group of ten girls who are part of a biological weapons terror plot. A napkin covers a glass and a coin is placed on it. Players take turns to singe the paper with a cigarette end and the game ends when one of them causes the coin to fall into the glass. This was apparently a popular game around this time and probably goes back much further than this. Is there any evidence of an earlier date?

Actually, even older is Russian Roulette which goes back to at least 1937. It is normally a game for two but can be for multiple players.

The main difference between this and other cresendo games is that once a game is finished, if you want to have another game, any former losers are prevented from joining in. Also, there is more clearing up to do than is typical with other games of this type.

If you can think of another game produced before 2000 that should be in the list, or have any comments regarding this page, please do get in touch...

The game of Ker-Plunk is related to this family but in Ker-Plunk the game is not terminated by a single calamitous event; rather each time a straw is pulled from the middle section of the tube, some marbles might fall down. The person with the least marbles wins after all marbles have fallen so the penalty is shared rather than having a single culprit.

Masters Traditional Games sells a variety of versions of Jenga and Giant Towers.

A version of Takoradi Bricks is still available from Ta-ka-Radi.