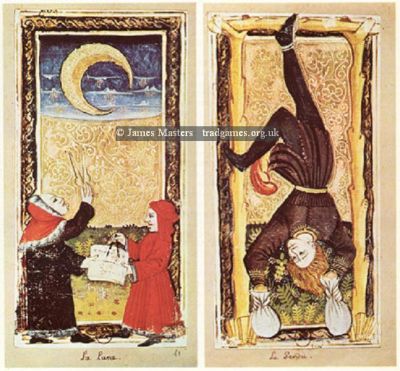 Playing Cards undoubtedly originated in China. Stuart Culin, the American games historian, did the most original research in this area and he concluded that they appeared before 1200AD in that country and were introduced to Europe in the 13th century.

The cards to the right are Tarot cards owned by Charles VI of France, dated at 1392. 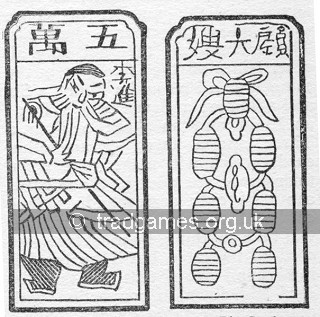 The original Chinese cards appear to have been related to the Chinese paper money of the time. In fact it seems likely that people created the cards by copying paper money and then both played with and for these cards! A pack of Chinese cards were not at all like European cards of today. In appearance, although made of flexible cardboard they are much thinner (Kwan Pa'i cards are only 3/8 of an inch wide). There were two main types of Chinese Playing Card:

Kwan Pa'i playing cards contain only three suits - coins, strings of coins and myriads of strings of coins. A pack consisted of 30 cards - 9 of each suit plus an honour card viz:

Lut Chi was the other main type of playing cards - these appeared in the South of China which has an additional suit - you guessed it - tens of myriads of coins. Lut Chi cards are also wider - typically 1 & 1/8 x 2 & 1/4 inches. Lut Chi cards have 4 suits and superficially some pictures of the suits bear a resemblance to the original playing card suits of Asia and Europe e.g. the strings of coins can look like sticks or batons. So therefore Culin and others have assumed that these formed the basis for European cards. This is not unreasonable but one should bear in mind that there doesn't appear to be any actual direct evidence for the link between Chinese and European cards so definite assertions of the ancestry should be treated with caution.

One style of playing cards illustration had the pips representing the number prominently displayed at the top and bottom of the card with the picture itself being a square at the centre of the thin card. This style is called domino cards and these eventually evolved into the game of dominoes.

There are several competing but inconclusive theories for the arrival of playing cards in Europe. Tiresomely, you will find these repeated on numerous Internet sites including Wikipedia and they all tout their theory as undeniable fact. Don't believe what you read - most of them are written by plagiarists copying what is probably utter poppycock. David Parlett in his "History of Card Games" does a excellent job of disreputing the following 4 theories viz:

Having dismissed all the above, what is generally accepted is that in the late 1300s, the Mamelukes of Egypt introduced their style of cards to Europe. A pack of Mameluke cards consisted of four "suits" of 13 cards each, just like modern playing cards. The suits were:

and each had ten numbered cards and three court cards - King, Vice-King and Second Vice-King. The story behind how the Mamelukes came by their style of cards and whether there is a link through the Middle East to the Chinese cards is unknown, as yet. 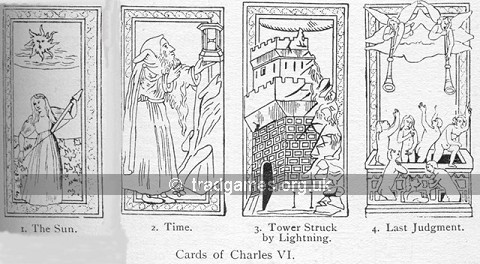 The earliest references to cards in Europe are mostly in France (the records of King Charles VI show that he bought 3 packs in 1392). These original cards featured four suits (Cups, Swords, Coins and Batons) of 14 cards each - there was an additional card in each suit - the "Cavalier" or "Mounted Valet", the lowest of the four court cards. These suits are still the suit of choice in most Latin countries such as Spain and Italy, today. Additionally, there were also 22 extra "high cards" with individualistic designs which may have come from ancient Egyptian mysticism. Each card was individually painted; often a unique work of art in its own right, fit only for the very rich. These then were packs of Tarot cards although they were used for playing games as well as for divining the future.

The Europeans adopted a wide range of different suits and styles according to local tastes and the preference of the person drawing the cards. Sometimes 5 suits were evident, instead of 4. Playing cards with suits of Spades, Clubs, Diamonds and Hearts first appeared in France in the late 1400s. The French have a story to account for this. They were supposedly invented by a famous knight, Etienne Vignoles who went by the pseudonum of Lahire. He designed them to accompany his newly invented card game of Piquet. The individuality of the earlier cards and the Cavalier card were eliminated in these packs of 36 cards. Piquet is supposed to be a game of knights and chilvalry and so the suits were created accordingly: 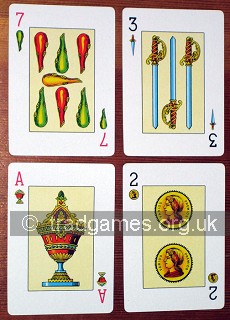 Another theory claims that the four suits represent the four classes of person at the time - military, peasantry, clergy and aristocracy. But in fact, there is a third more straightforward theory that is most likely the correct one (see later).

The English adopted this regime from France, the first English reference to cards being from 1462 when they were banned by parliamentary decree. Later on the colonialism of England and France resulted in this style of cards arriving all over the world so that it is now the most popular design. 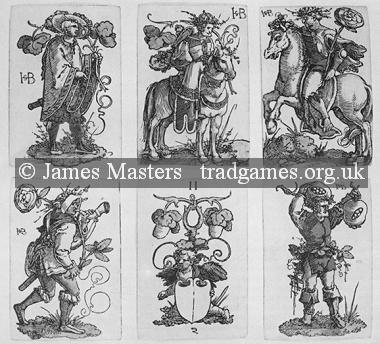 The Germans were the powerhouse behind the uptake in popularity of the game when they started to print packs in volume quantities, from around 1418 onwards. In Germany, the most usual suit combination came to be the following rustic designs: 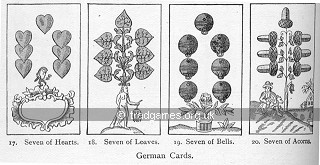 and this is still true to this day. Because they begain to export their relatively cheap decks of cards to other European nations, the German influence in card design was probably the largest. So another far more likely theory for the design invention of Hearts, Diamonds, Clubs and Spades is that the French just based these upon the German choices with the Leaves transposing to Spades, the Acorns to Clubs and the Bells to Diamonds (somewhat tenuous this last one but no other theories are postulated).

The picture on the left shows some 16th century cards held at the Bodleian. The suits here are Roses, Pomegranates, Vine leaves and Acorns.

From this basis, the use of playing cards grew around the world via trade and colonialism. Over time and into the 20th century, the English/French style of playing card came to be the de-facto standard used in Casinos world-wide and for popular American games such as Poker and Blackjack.

This is work in progress - other games will appear here over time...

Masters Traditional Game Shop has some top Playing Cards including the most durable cards in the world, Kem cards.

Card games have entertained people around the globe for centuries. They have always been a great way to pass time and increase socialness. Do you want to find the best card games? You are in the right place!