This author believes that Rounders, or something very like it was probably played several centuries prior to the first documentary evidence of the game. There is an engraving in the Bodleian Library dated 1344 which depicts a woman about to throw (underarm) a ball towards a chap wielding a large club which is thinner at the handle end. The picture that you can see to the right, however, only shows half the story, because the engraving also has several other figures of both sexes which the illustrator did not include because they were mostly damaged or indistinct. These figures are waiting to catch or stop the ball once the batsman has hit it. 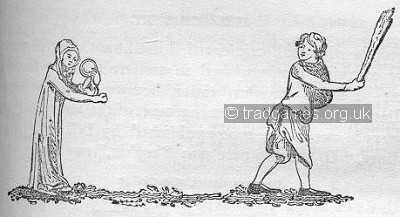 The description of the engraving does not mention any posts or bases so whether the game just involved hitting or whether running was also involved isn't known. But no wicket is shown so it doesn't appear to be an ancestor of Cricket. And people playing Stoolball hit the ball with their hand in those days so it cannot be that game.

Therefore, if the game is the ancestor of any modern game, Rounders seems to be the most likely candidate.

The other primary theory, equally vague, is that Rounders is a development of the old game of Stoolball. This game is mentioned in texts that go back as far as the fifteenth century. At this time, of course, there were no governing bodies dictating rules and so people played such games at fairs and on the village green in a variety of different ways. The only really consistent thing is that one player threw a ball and another player hit it - generally speaking with their hand. The stools were usually described as a wicket but in some versions, multiple stools were set up in a ring and players had to run from one to another. 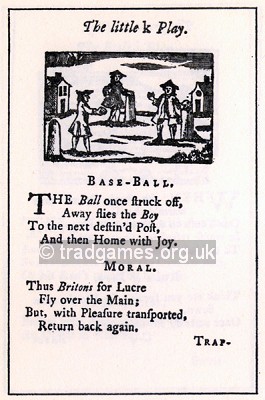 The game of Baseball is indeed an old sport. Most texts that you will read quote that the earliest documentary evidence for the game is from 1744 when the game was referred to as Base-ball. This is a reference from what is probably the first ever book written for children, 'The Little Pretty Pocket Book' by John Newbery published in London. In fact, the earliest mention made was by the Reverend Thomas Wilson, a Puritan living in Maidstone, Kent who wrote a disapproving piece about games being played on Sunday in 1700: "I have seen Morris-dancing, cudgel-playing, baseball and cricketts and many other sports on the Lord's day".

Base-ball continues to be mentioned in England - for instance by Jane Austen in "Northanger Abbey" which was written around 1800. But the earliest reference to the name 'Rounders' found by this author is in in the English Wesleyan-Methodist Magazine of 1787 as a children's game - so the term was in use by that time.

In America, where the national sport is Baseball, arguments raged for some time over whether the game was invented in North America or England. Discoveries of the above references put an end to most such discussion, especially as the rules for Baseball published in an American "Book of Sports" in 1834 were an exact copy of the rules of Rounders from the "Boys Own Book" published in London in 1829. The game was obviously being called by both names and being played in the same way in both America and England by the same rules in the early 1800s

The USA was certainly playing proto-baseball before this: In 1778, one of George Washington's soldiers in the American war of Independence mentioned playing a game of "Base" in his diary. And anyway, it was known in North America since 1750 when 'The Little Pretty Pocket Book' was published there. The game really came to the fore in America around the mid-nineteeth century, when Alexander Cartwright of New York City initiated the first codification of the rules (the "Knickerbocker Rules"), from which modern baseball developed.

In 1889 the Liverpool and Scottish Rounders Association was formed. The first official rules did away with the practice of putting a running batter out by hitting them with a thrown ball. The National Rounders Association was formed in 1943 and is still active today working particularly with schools promoting and encouraging play. These days, at competition level, Rounders tends to be played more by girls than boys.

Rounders England, known until 2008 as The National Rounders Association.