Stoolball & the origin of ancient Bat and Ball Games

Stoolball is usually quoted as being the ancestor of Cricket, Bat and Trap and sometimes Rounders, too. Modern Stoolball is indeed similar to Cricket but Cricket is a very old game too and ancient Stoolball was quite a different game. So it is difficult to be sure.

However, Cricket seems to have appeared in the sixteenth century whereas the earliest reference to Stoolball predates Cricket's by more than 100 years and it isn't unreasonable to imagine that a game played with stools and the hand developed into a game played with wickets and a bat.

The story goes that milkmaids started the game by throwing stones at their upturned stools while waiting for their shepherd husbands to return from the fields. A more concrete fact is the first reference to Stoolball which is from 1475 and says "Hand ball, fott ball, stoil ball & all manner other games out cherchyard".

The illustration is a picture of stoolball from a children's book published around 1744. Interestingly, in this version of the game there doesn't appear to be anyone defending the wicket (stool). The accompanying rhyme regrettably begs more questions than answers: "The ball once struck with art and care, And drove impetuous through the air. Swift round his course the gamester flies, Or his stool's taken by surprize.".

Francis Willughby's description of "Stoole Ball" also called Tutball is not a lot like the modern game. A target (stool or sometimes 2 stones forming a goal) is set up and the defending players group around it. Players "post" the ball by throwing it in the air and hitting it with the flat of the other hand towards the other team who stand a prudent distance away and try to catch it. The teams post it backwards and forwards until one side drops it. If the team at the stool drop it the player who first posted is "out". If the attacking team drop it, then they are allowed to post at the target - if they hit it the player who first posted is out but otherwise the stool team score two points.

Joseph Strutt reports that Stoolball was still being played in two forms in England around 1800. The version played in the North of England at that time appears to have been for two players - at least that is how Strutt describes it. A stool is set upon the ground and one player stands before it. The other player throws the ball at the stool while the defender attempts to prevent this happening by hitting the ball with his hand. Each time he does this successfully, he scores a point. When the bowler successfully hits the stool or manages to catch the ball hit back by his opponent's hand before it touches the ground, that player is out. The players then change places and the person with the most points after both players are out, wins the game.

The other version of the game seems to be more of a group game, rather than one team or person against another but both versions seemed to die out during the 19th century.

A number of early references refer to a game called Stowball or Stoball or or Stobbal or Stopball. This appears not to be the same game as Stoolball - certainly Willughby in 1672 put the games separately and Strutt in 1800 thought they were different too. Willughby's description of Stowball has 2 teams of up to 4 players each and 2 pins are set into the ground. One team hits the ball with a club several times in an attempt to get it around the other pin and back to the starting pin. The other team appears to be able to have a chance within the rules to bash the ball back to try to hinder them. Whichever team achieves the feat in the fewest strokes wins.

Numerous authors have been confused about Stowball and Stoolball, some such as Alice Gomme assuming that they were the same game and others muddling the references. Having looked into it, this author believes even the OED has fallen foul of some muddling in this area.

The Berkeley manuscripts describe the Earl of Leicester (created 1564, died 1588) playing a game of Stowball at Wotton Hill immediately after the lands of Lord Henry Berkeley were passed to him. 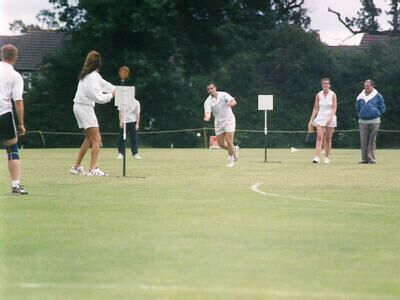 In 1916 Major Grantham of Balneath Manor, Sussex re-kindled Stoolball as a healthy pastime for soldiers convalescing soldiers and it has been alive in Sussex ever since, where it has become the traditional pub game for the area.

Today, the game is played with wickets that are 1 foot high square boards hoisted on poles standing 4 feet 8 inches high. Each structure stands 16 yards apart and is bowled at behind a bowling crease just 10 yards from the wicket. The bowler throws the ball underarm at the wicket without bouncing and the batsman scores runs in the same way as for cricket - by running to the opposing wicket. The ball is solid and covered in leather and the bat is rounded and about 7 1/2 inches across with a stubby handle. Also like cricket, each team consists of 11 players but an "over" consists of eight balls, not six.