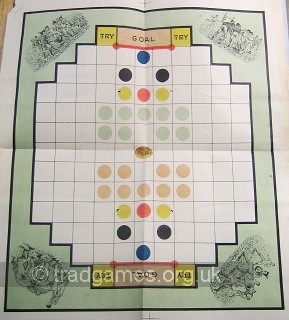 The Victorian period in England more than any other in history saw a renaissance in games invention. At the same time that some of the world's major sports like Tennis, Croquet, Snooker, Football, Rugby were being codified, hundreds of new parlour games were being invented, patented and registered for copyright each year, many of which went on to become cultural icons such as Ludo, Snakes and Ladders, Happy Families and Reversi. It was inevitable that amongst these would be games based on the national sport of England - Football. From that period on, games based on Soccer have continued to be invented. The craze seemed to start around 1887 when several appeared including "Parlour Football" and "Table Football".

Most parlour football games have fallen by the wayside but one or two have survived the test of time. The three that most people have come across at one time or another are Table Football (Foosball), Subbuteo and Blow Football.

Here is a game called "Football at Home" which appeared in 1887 and is possibly the earliest parlour football game ever produced. 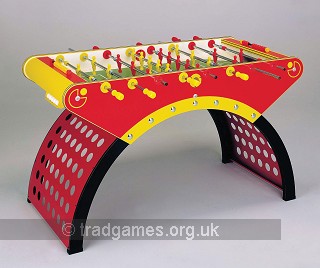 Probably the most popular miniaturised version of the game of Football is "Table Football" known also as Table Soccer, and in North America (where Football tends to mean a convoluted ball game based on Rugby), it is referred to as "Foosball".

To the left is a modern Football Table from one of the top manufacturers - Italian company Garlando.

Table Football is a fast a furious bar game which has a devoted following and is well known in most of the major countries of the world. It normally involves a large box-shaped playing area with two goals at either end. Players twist the handles of bars that lie across the width of the table, from which hang miniature football players at just the right height to kick the ball - if the timing is right.

As with so many games, there are multiple theories as to who and when the game was first invented. The French inevitably have a claim - "Baby Foot" as they call it was supposedly invented by a Citroen employee Lucien Rosengart (1880 - 1976) although the date isn't documented as far as this author is aware and the provenance is generally doubtful. A popular story on the Internet is that Alejandro Finisterre invented Table Football in 1936 with the vision of providing some entertainment for children unable to play football on wet days. He got together with Francisco Javier Altuna, a maker, and they created the first production Football Tables and also obtained an patent for the game during 1937 but, it is said, his idea was ripped off by various nefarious entities including the mafia(!) and so he didn't derive any reward from his idea. There is an element of truth in this as it seems likely that Finisterre can be credited for this initial push to make the game popular but the claim that he invented it is just another example of why you shouldn't always believe what you read on the Internet (unless it's on this site, of course). 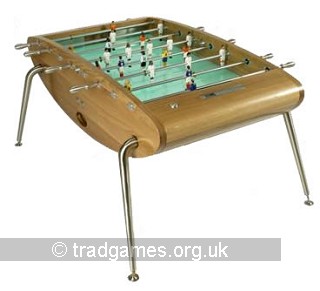 By far the most likely claim for the invention of Table Football is that it was invented in Britain. The first game that could genuinely said to be a member of the Table Football family was patented in 1913 by Edwin Lawrence. It did have horizontal bars controlling players who kicked a ball, but there was only one bar and one footballer for each player. A more comprehensive football table game was invented and patented in the UK by Harold S. Thornton of North London in 1922 - the original design shown on the patent differs very little from the game that is still played today.

While Table Football is a popular bar game with a large band of devotees across the world, it is also popular as a parlour game at home and tables vary from tiny ones for children to football tables costing thousands of pounds used at competitions and by connoisseurs. At the top end, national and international championships have been organised since the 1940s and the Table Football World Cup is scheduled to occur every four years at the same time as the Football World Cup! Professional tournaments were first instigated by Lee Peppard in the USA in 1975 and still happen regularly - expert players play at a bewildering pace and can strike the ball at speeds of up to 50 miles per hour.

In 2002, the International Table Soccer Federation (ITSF) was established in France as the international regulatory and organising body for the sport. They even hope to persuade the IOC to officially recognise Table Football as an Olympic sport!

A decidedly unhygenic game, blow football consists of two people blowing through straws at a ball between them so as to get the ball to roll into the other person's goal. Not recommended for asthmatics, the game is often cobbled together using left over straws from a party and a ball covered in fluff found under the sofa but game companies have also supplied slightly better quality commercial versions for many decades. 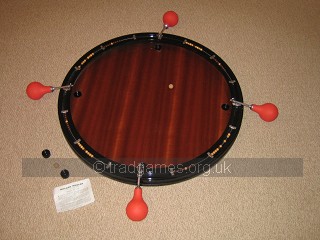 Shown to the left is an early Spears Blow Football game - by kind permission Brendan of antiquesports.co.uk.

In fact, this author has believes the earliest documented evidence for Blow Football is a game published by Multim in Parvo, 1899.

The French have a far more sophisticated and civilised version of Blow Football that they called Billard Nicolas. This is a game for four players played on special board with carefully positioned puffers defending circular goals in the game board. Great fun but hard on the fingers, in this author's experience... 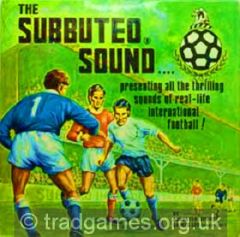 Of the modern table-top football games, the most popular (discounting Table Football) for many decades has been Subbuteo.

Invented and produced by Peter Adolph in Tunbridge Wells, Subbuteo quickly became an international craze. The key to its innovation was to have the players standing on upturned weighted hemispheres. These kept the players upright and when they were flicked to knock the ball, allowed them to spin and curve the ball with some control. The game took off like a rocket and by 1968 Adolph could no longer cope with the increasing demand. In order to continue he sold Subbuteo and his business to Waddingtons, where he stayed on as Managing Director for a few years before finally retiring.