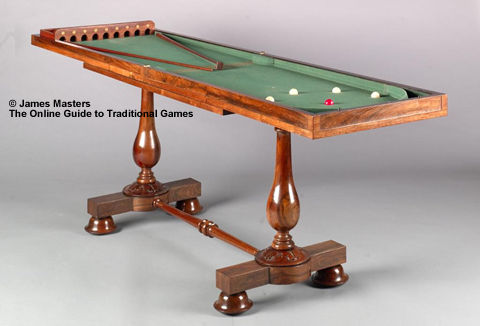 The game of Bagatelle is a pub game of skill that is closely related to the games of Billiards, Pool and Snooker. Modern derivatives include Children's Bagatelle, Bar Billiards, Western Pinball and Japanese Pachinko.

The picture of this early 19th century Rosewood Bagatelle table is with thanks to Henry Adams Auctioneers. Notice that the table comes with one cue and one mace, the obsolete ancestor of the cue. The table is designed to fold over to become a desk when not in use and plays bagatelle in one direction and La Trou Madame in the other.

A competition Bagatelle table is of a similar form to a Billiards table, slate bed, cloth covered with cushions and measuring 6 - 10 feet long and 2 - 3 feet wide. The first major difference from a billiard table is that one end is rounded instead of square. The second diversion is that instead of pockets around the edge, the semi-circular end features nine holes (in the manner of Bar Billiards), one in the middle of the semi-circle and the rest surrounding it evenly in a ring. The hole in the middle is numbered nine, the others are numbered 1 - 8 in a semi-random order. Rather like a Billiards table, Pool table or Darts board, a variety of games can be played with it but all involve the players standing at the square end of the table and hitting the balls with a cue towards the holes at the other end. 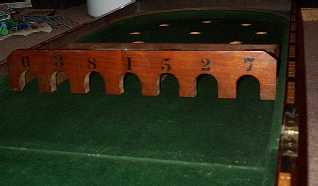 The origins of Bagatelle are even less clear than most games of a similar history although, since the name is a French one, the most obvious guess is a French derivation. Anyway, from 1770 to 1850, it seems that the Bagatelle was just as popular as Billiards throughout England and Britain. The journals of John Thurston, one of the leading manufacturers of Billiards tables in the 1800s, show that he made a large number of Bagatelle tables between 1818 and 1845. To add to the mystery further, the French version of his catalogue refers to the game as "Billiards Anglais", from which this author deduces that the French connection is either much older or is a red herring. In this latter year, the game joined the long list of restricted and banned games when a Gaming Act decreed that there should be "no play on a public billiard table or bagatelle table from 1 am to 8 am and on Sundays, Christmas Day and Good Friday".

Bagatelle became very fashionable during the Victorian era and numerous games were produced for the home. These tended to be smaller than the pub games and often folded up for easy storage but most were high quality articles.

The two top pictures were kindly sent by Peter Thompson who is the owner of the table shown. 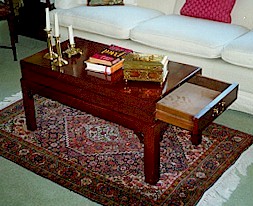 The table is without legs or any sign of them ever having existed so the table presumably rested upon a dinner table or other amenable surface. When unfolded, the table top looks identical to the picture lower right. However, included with the table are the set of arches shown. These arches could be used to play other Victorian games of the same family - most are no longer played as far as the author is aware. In "Trou Madame", also known as "Small Trunks", players gain points for going through the arches as well as into the the cups but it's not permitted to go through the same arch twice in a turn. "Mississippi", was another version of the game in which proceeding directly through the arches was not allowed - a ball had to bounce off a cushion first. 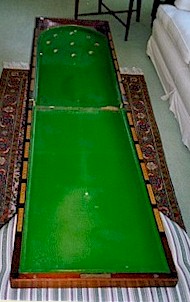 The two lower pictures were very kindly sent to the author by Jerry Head from Georgia, USA. They show one of two similar bagatelle tables owned by him. The picture of the table unfolded is apparently one of the Victorian tables discussed above. Notice the scoring holes in groups of five down the length of each side - ivory pegs would have been used to keep score in these. The other picture showed how this table serves as a piece of high quality furniture when folded up. It seems most likely that the game was adapted in America by a craftsman to add value to the antique table rather than appearing like that when originally sold. However, another owner from England says that he believes his was made with the table so this is a moot point.

In the 1970s there were a number of pubs playing Bagatelle in Bristol and Walsall and, most particularly, thriving Bagatelle leagues in Coventry and around Chester in the North West. At the turn of the millennium, the game is known still to be played in Chester, Coventry, Bristol, North Wales and Liverpool at least but its popularity has declined.

The game played in the North is directly descended from the older game and starts with a black ball spotted in front of the nine holes. Eight white balls are then struck in succession by a player in an effort to get the balls to fall into the holes with the restriction that the ball being played must cannon off another ball before falling into a hole. The black scores double points so the aim is normally to try to roll the black ball into the central nine point hole. In the South, the tables tend to be larger - up to 10 feet long - and feature two side pockets about three quarters of the way up on either side. The game is played in a similar way but instead of one black, two reds are used. 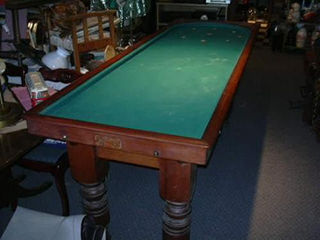 This picture was sent in by Donald McGill from Seattle, USA. It is 8'6" long and the plate on the front says "Ashcroft & Co, Victoria Street, Liverpool". Ashcroft were a famous Liverpool Billiard Company who won a Gold Medal at the 1886 International Exhibition but if anyone knows anything more about the table or the company, please send us an email.

It will be immediately evident to anyone who has played Bar Bar Billiards, that Bagatelle is of the same family and it therefore would seem to be quite likely that Bar Billiards is the descendant of Bagatelle. No direct evidence has been found to support this claim, unfortunately, and so it can only be hoped that someone, somewhere will one day discover the missing link that joins the two games. Bar Billiards came to England from France and Belgium, which again points to a French connection. Other variants of the game are known in other parts of Europe e.g. Italy. For more information, please refer to the separate page on Bar Billiards 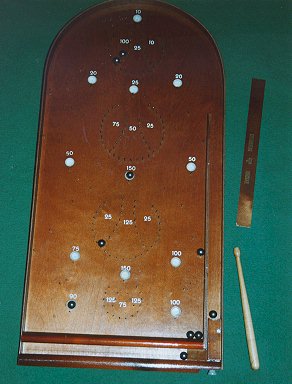 The name Bagatelle these days is far more likely to conjure up the image of the children's pastime wherein marbles or ball bearings are shot onto a board which features areas fenced in by nails hammered into its surface. Each container scores different points depending upon the likelihood of a ball finishing in it. An entertaining game, generally considered to be for children, the resemblance to the original pub game is not overwhelming. This smaller version began to appear in the late 19th century. The similarities are that the players shoot balls from the square end of the board towards the semi-circular end of the board with the objective of getting the balls to land in scoring holes and areas on the board surface. However, the whole board has been miniaturised to a tabletop size (in the same way that Shovelboard became Shove Ha'penny and Skittles begot Table Skittles). Presumably because aiming the balls was too difficult for youngsters, the balls run up a channel on the right hand side. The targets are enlarged by virtue of surrounding nails and the elements of skill have generally been almost replaced by that of luck. No points are scored if the balls roll right back down to the bottom edge of the board. Early boards required the balls to be struck up the channel by a cue in the same way as for the adult game. Modern games usually feature a sprung plunger as an alternative or a replacement to the more traditional stick. This author has read that Montague Redgrave patented a spring loaded plunger mechanism to launch the ball in the year 1870.

Board shown is from the authors collection.

It takes less of a leap of imagination to jump from Children's Bagatelle to modern-day Pinball machines of the sort that have graced any self-respecting amusement arcade from the 1930's onwards. The traditional quiescent scoring mechanism is replaced by transient electronic method whereby the balls score points as they travel around the games surface, rather than scoring when they come to a halt. And the skill level is greatly increased because the balls can now be knocked back into play by flippers at the front of the game. But the plunger knocks the ball into play up a chute on the right, the balls are dead when they roll down to the area at the front of the game and scoring is achieved by getting the ball to roll into scoring holes and areas on the game surface itself in exactly the same way.

The other modern electronic derivative, the Japanese version of Pinball is called Pachinko. These games tend to stand vertically and balls tend to be shot into the game from the bottom right hand underneath the playing area and then around to drop in from above left. The reward for placing the balls in scoring areas is to receive more balls to shoot into the game and eventually exchange the points for prizes. As time progressed, computerised versions and all sorts of clever entertainments have been merged into the basic game so that a Pachinko machine is often more like a Fruit Machine or slot machine than a ball game. The Pachinko industry is absolutely huge in Japan but it isn't known whether it originally arrived from Western Europe or America